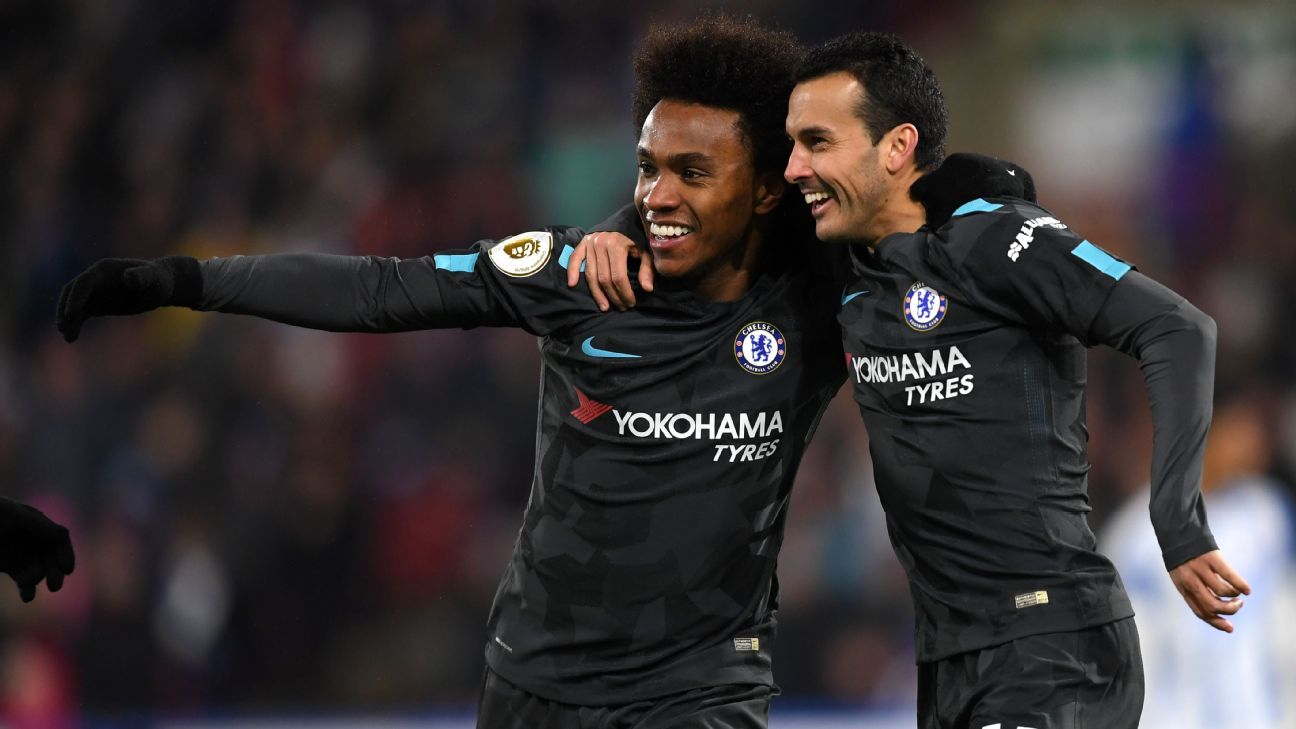 Chelsea fans still smarting from Saturday’s shock 1-0 loss at home to West Ham won’t be pleased to hear that continental bargain hunters Juventus are sniffing around three of their stars.

Reports at Tuttosport claim that the Bianconeri are lining up moves for Emerson Palmieri, Willian and Pedro, with the Serie A champions looking to take advantage of the protracted contract situations of the latter two.

In particular, Juve sporting director Fabio Paratici is concentrating on Brazilian winger Willian and could make a January swoop to tie the 31-year-old down to a pre-contract agreement to join the Turin club in the summer of 2020.

Pedro, meanwhile, is also close to the end of his Stamford Bridge deal, and with no new contract believed to be on offer at the moment, there is a clearer pathway for Juventus to sign the former Barcelona forward.

Full-back Palmieri would be the only player of the three to command a transfer fee, having joined from Roma on a four-year deal in 2018.

Barcelona midfielder Arturo Vidal is growing increasingly frustrated at his lack of playing time at Barcelona, and Tuttosport claims the Chilean is hoping to link up with Antonio Conte at Internazionale in January.

The 32-year-old has been missing for the Catalans’ last three games and has been in and out of the side since joining the club from Bayern Munich in the summer of 2018.

Conte has been a long-term admirer of the former Juventus man. He reportedly wanted to bring him to the San Siro in the summer and also enquired about the midfielder’s availability while he was manager of Chelsea.

Speaking in an interview, Vidal raised doubts over his long-term future at the Nou Camp, saying he will reevaluate his options at the turn of the year if his first team prospects don’t improve.

Manchester United are hoping to sell midfield outcast Nemanja Matic in January, with the Sun claiming Italian duo Juventus and Inter Milan are keen on the former Chelsea man.

Serie A leaders Juve are closely monitoring the Serbian’s contract situation, with the 31-year-old’s deal at Old Trafford expiring at the end of the season.

However, the United hierarchy are determined to recoup at least some of the £40 million transfer fee they spent to sign Matic from Chelsea in 2017, and will trigger a one-year extension on the player’s deal if he does not agree a permanent move in the January transfer window.

Reports claim the Red Devils are looking for around £15 million for the 48-cap Serbia international, and Inter Milan manager Conte prefers the defensive midfielder as a potential bargain over the aforementioned Vidal.

– Crystal Palace manager Roy Hodgson says he is bracing himself for another tense transfer window, with the Standard saying that speculation regarding Wilfried Zaha‘s future is set to intensify after the club’s chairman told the Ivory Coast international he can leave the club in the New Year if the right offer comes in.

– Queens Park Rangers midfielder Eberechi Eze looks set to miss out on a dream move to Tottenham Hotspur following the sacking of manager Mauricio Pochettino, who was reportedly lining up a January move for the 21-year-old. The Sun claims Chelsea, Leicester and West Ham are also keen on the youngster.

– Celtic manager Neil Lennon is determined to keep midfielder Nir Bitton at the club, despite the Israel international being linked with a free transfer to Premier League side Burnley, according to the Herald. The 27-year-old’s contract in Glasgow expires at the end of the season, but Lennon says talks to extend the player’s stay are ongoing.