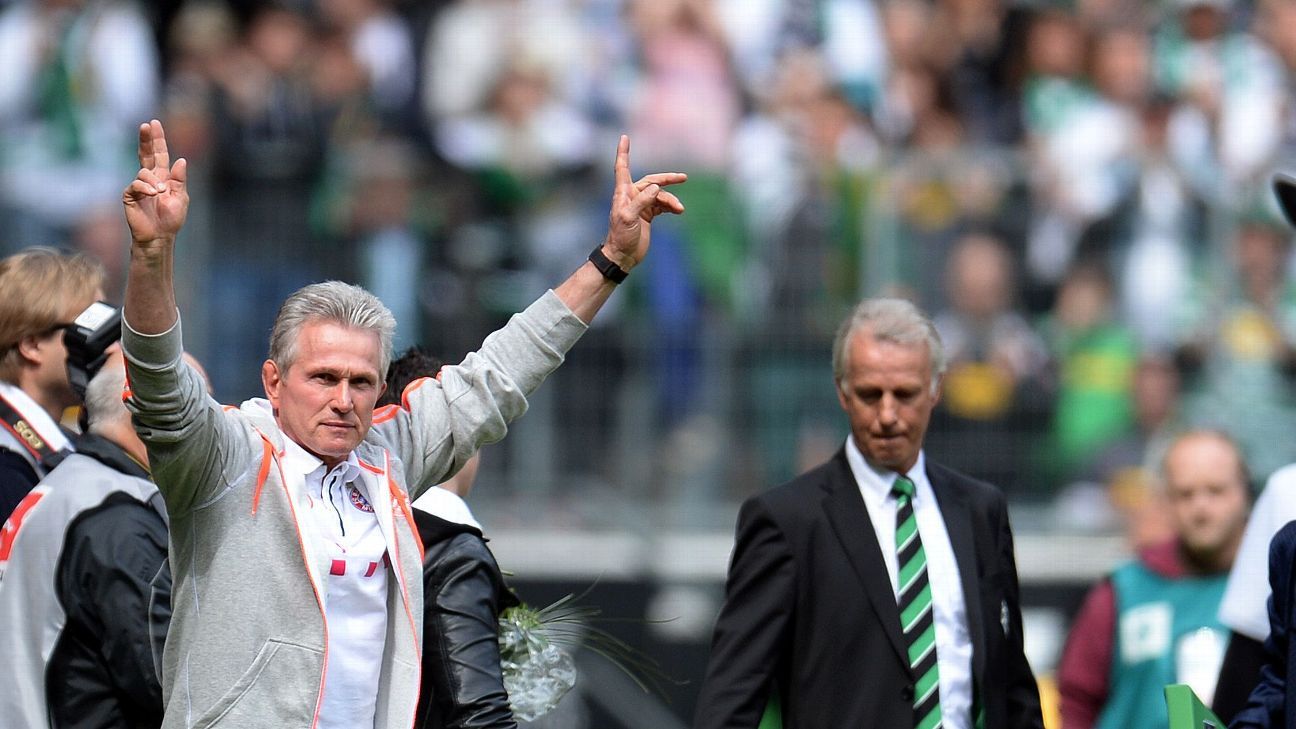 
Forget Borussia Dortmund or upstarts RB Leipzig, the Bundesliga’s original Klassiker is Bayern Munich vs. Borussia Monchengladbach. The two heavyweights dominated Germany from the end of the 1960s until 1981, with Bayern winning the league six times and Gladbach five.

Here are five memorable meetings to whet the appetite before Saturday’s true Klassiker.

Back in May 1974, Bayern had just sealed their first hat trick of league titles, with Gladbach only a point behind in second despite thrashing the newly-crowned champions 5-0 on the final day of the season.

However, there were mitigating circumstances behind Gladbach’s win. Bayern were still a little worse for wear after celebrating deep into the night following their first European Cup success, in a replay against Atletico Madrid the evening before in Brussels.

Bayern took a four-hour bus trip from Brussels to the Bokelberg in unbearable heat and Gladbach keeper Wolfgang Kleff said: “Bayern arrived in a condition where they definitely wouldn’t be allowed to drive a car” and “should have played the game in sun glasses.”

Bayern’s coach Udo Lattek said: “We were sat on the bench just laughing after each goal went in.”

Franz Beckenbauer, presented with the title before the game, likened the match to “more of a sobering up session.”

With the title up for grabs on the final day of the 1976-77 season in Munich’s Olympiastadion, Gladbach sprinted into a two-goal lead through Heynckes and Uli Stielike. Bayern fought back to 2-2 but it wasn’t enough.

Pipping Schalke and Braunschweig to the title with the crucial point, Heynckes & Co. wrapped up their third title in a row (matching Bayern’s feat between 1972 and 1974). Though Gladbach’s fifth Bundesliga title remains their last.

With Bayern languishing in seventh, it proved “Der Kaiser” Beckenbauer’s final game before joining Pele at New York Cosmos for a record fee of $2 million.

Lothar Matthaus started his career with the Foals but by the time two sides met in the DFB Pokal final in 1984, he had announced he was joining Bayern. Gladbach, then-coached by Heynckes, faced Bayern in Frankfurt’s Waldstadion — the last final to be played outside of Berlin’s Olympic Stadium.

With only seven minutes remaining, Wolfgang Dremmler cancelled out Frank Mill’s opener for Gladbach. No goals followed in extra time and it needed the first ever DFB Pokal penalty shootout to separate the two sides.

Gladbach fans have never forgiven Matthaus for blazing the opening penalty of the shootout over the bar, but teammate Norbert Ringels missed as well, before Michael Rummenigge, Karl Heinz’s brother, sealed the cup for Bayern, who prevailed 8-7 on penalties.

Matthaus has been greeted with “Judas” and accusations — even from Gladbach’s own club suits — that he missed the penalty on purpose whenever he returns to his former stomping ground.

Dante does a Matthaus

Thanks to a string of miraculous saves from Manuel Neuer and a 19-year-old Marc-Andre ter Stegen, it somehow remained 0-0 after extra time between Lucien Favre’s side and Heynckes’ Bayern in March 2012.

With penalties needed once again, David Alaba, Franck Ribery, Philipp Lahm and Toni Kroos all converted for Bayern, while Dante blazed high and over and Havard Nordtveit’s tame shot was saved by Neuer.

After “doing a Matthaus” and firing high and wide, the Brazilian defender was all set to jump ship and join Bayern at the end of the season. Commenting on the inevitable transfer after the game, Bayern president Uli Hoeness said: “I wouldn’t have let him take a penalty. Perhaps it wasn’t a very clever decision.”

Bayern prevailed 4-2 in the shootout but were dismantled 5-2 by Borussia Dortmund in the final, with Robert Lewandowski scoring a hat trick. Dante went on to win the treble the following season in Munich under Heynckes.

A week before the 2013 Champions League final at Wembley against Dortmund, Heynckes returned to Gladbach on the final day of the season for his 1011th and last Bundesliga outing as a player and coach — or so we thought.

Bayern came back from 3-1 down after only 10 minutes, as goals from Arjen Robben and a Franck Ribery brace helped seal a remarkable 4-3 win.

Heynckes, due to be replaced by Pep Guardiola, admitted in a tearful farewell that the reception by the Gladbach fans “showed me this is my home.” He won four Bundesliga titles as a striker with the Foals, becoming the Bundesliga’s youngest ever coach at the age of 34 in 1979, before switching to his first spell in charge of Bayern eight years later.

A week after the rousing win, Bayern racked up part two of the Treble with Arjen Robben’s late goal seeing off Jurgen Klopp’s Dortmund.