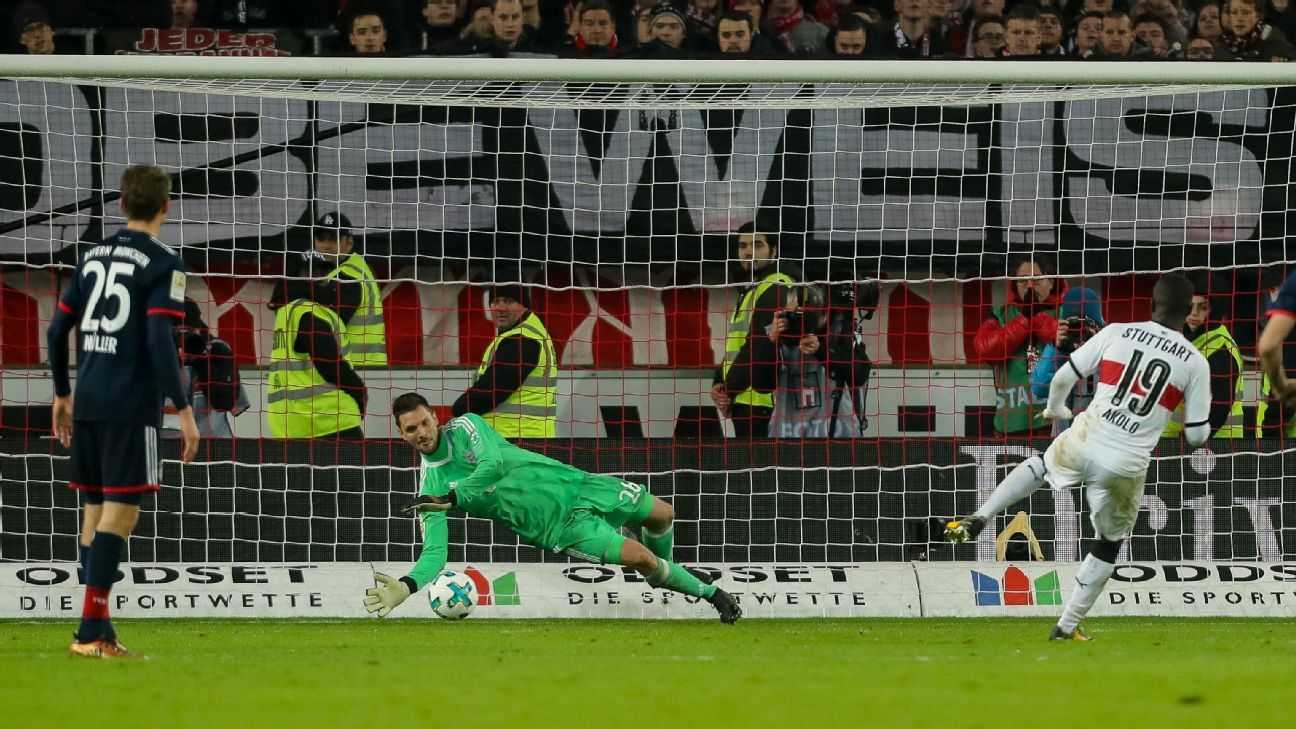 
STUTTGART — Bayern Munich boss Jupp Heynckes said Sven Ulreich is “worth his weight in gold” and “a guarantor for our success” after the goalkeeper saved a penalty in the final seconds to help the German champions edge Stuttgart and move 11 points clear in the Bundesliga.

After a goalless first half, substitute Thomas Muller grabbed the game’s only goal with 11 minutes remaining, latching onto Kingsley Coman’s pass to drill an exquisite finish past Stuttgart’s ex-Leicester and Manchester United goalkeeper Ron-Robert Zieler.

Bayern wasted chances to kill the game off on the break through Robert Lewandowski and Muller, before the industrious home side were awarded a penalty in the dying seconds of added time after substitute Niklas Sule was adjudged, via video review, to have fouled Santiago Ascacibar in the box.

Chadrac Akolo stepped up to take the penalty but Ulreich, facing his former side, sniffed out the danger diving to his right to preserve the three points.

And Heynckes hailed his goalkeeper at the postmatch news conference, saying: “Since I came back, Sven has continually and positively developed. He has become a guarantor for our success, not making a single mistake that has led to us conceding a goal.

“He’s gained the team’s respect and has become even stronger after working with our goalkeeping coach Tony Tapalovic. He is confident and, it goes without saying, I have faith in him.

“He showed outstanding reactions as early as the seventh minute getting down low to his left to save [from Akolo].”

Heynckes added: “You can tell when a player is confident and more certain of his ability, and then he can develop even more with hard work.

“And that is undoubtedly what has happened, he has become a very good goalkeeper and, in this phase when Manuel Neuer is injured, he is worth his weight in gold to us.”

Bayern won 1-0 for the third straight game, but Heynckes also graciously hailed the opponent’s display, despite Stuttgart sitting just above the relegation zone in 14th place.

“The crowd today have witnessed a highly interesting game,” he said. “It was intensive and dramatic — it had all the ingredients of a top game against a young, hungry and talented VfB Stuttgart side.

“It was the final league game before the winter break and while it is becoming more difficult to keep our level, both teams played well but I have to pay special compliment to VfB.”

“We are happy with the 1-0, the penalty save in the last seconds, but we should have made it 2-0 before that.

“We have now won 1-0 three times in a row. It’s not like we are outplaying opponents. But we perhaps have the quality and the cleverness to get results, even if things are not going so well.”

Heynckes has an almost perfect record since returning for his fourth spell in charge, with the only setback a 2-1 loss to his former side Borussia Monchengladbach, whom he played for and coached before leaving for Bayern for the first time in 1987.

And he joked: “I have just lost one game so far in Monchengladbach — perhaps that was an inner desire of mine, or I signalled to my team it isn’t bad if you lose today.”