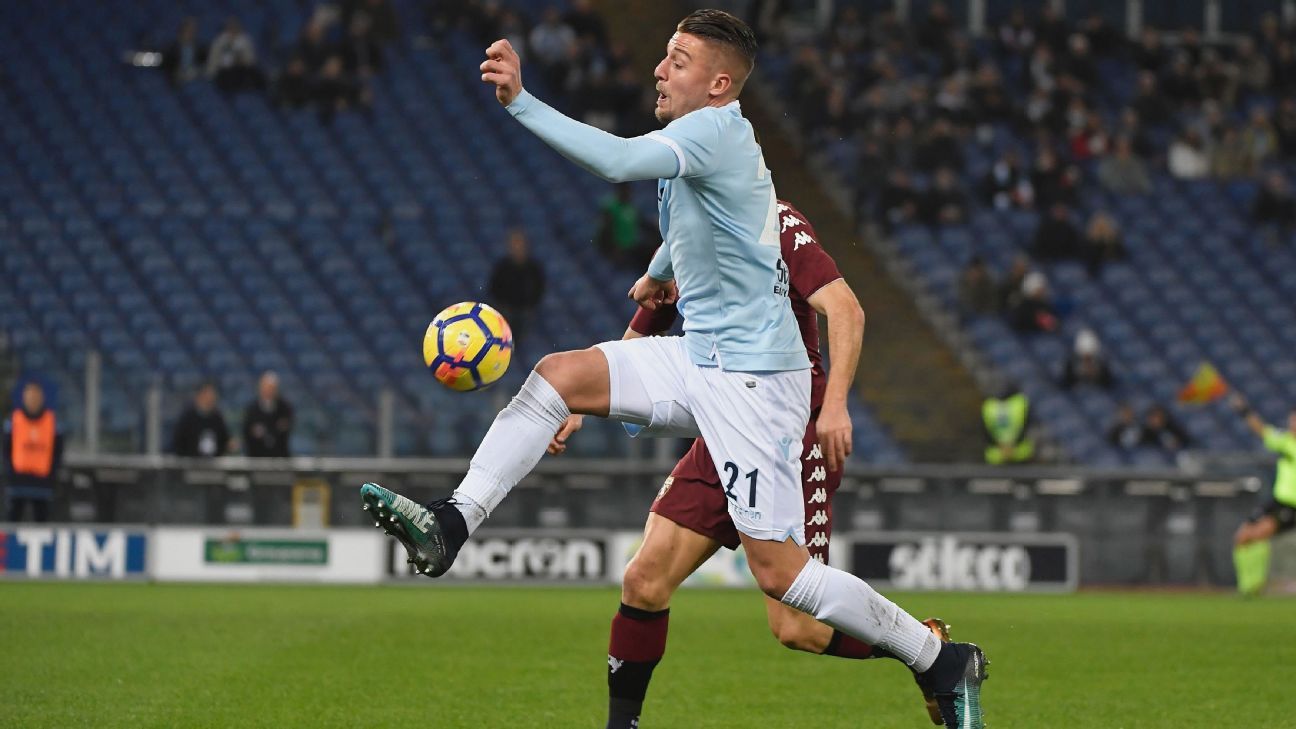 
Manchester United are reportedly tracking Lazio’s Sergej Milinkovic-Savic, with his family already having ties to the Premier League club.

Few would be aware that his younger brother joined United more than three years ago. Vanja Milinkovic-Savic’s spell at Old Trafford never really got off the ground, though — he was loaned back to his home club, Vojvodina, immediately after completing the transfer in May 2014, then was released in November 2015 after failing to get a work permit.

Unlike his younger brother, Sergej has already played at full international level for Serbia and in the Europa League with Lazio. He probably has a better chance of getting a work permit in England.

Monday was an emotional day for the brothers, as they opposed each other for the first time when Lazio faced Torino in Serie A. However, while Vanja sat on the bench and has so far played just one Coppa Italia game for Torino, Sergej is one of the brightest stars in Italy.

Choosing a different path might have helped. Whereas Vanja was lured to Manchester while very young, Sergej went for a much more sensible option, signing for Belgian club Genk in the summer of 2014. He did so at the age of 19, having gained experience with Vojvodina, and even played an important role in winning the Serbian Cup that year — the club’s first piece of silverware since 1989.

“I believe that is the right time to leave. Genk is the right place to make progress, because the Belgian league offers many opportunities,” Milinkovic-Savic said at the time.

The brothers have contrasting personalities almost in every aspect, from music and films to food and Belgrade football teams — Sergej supports Partizan, Vanja loves Red Star. Their position on the pitch is also different — Vanja is a goalkeeper, Sergej a midfielder. In addition, Sergej is shorter than his younger sibling by no less than 10 centimeters.

That doesn’t mean that the Lazio star isn’t tall enough. Vanja is a towering keeper at 202 centimeters, while Sergej is a very imposing and physical figure in midfield at 192 centimeters. That is hardly surprising when taking genetics into account. Their mother, Milana Savic, is a former basketball player, while father Nikola Milinkovic was a tall and robust footballer himself.

Nikola spent a significant part of his career in Spain, and Sergej was born in Lleida in Catalonia. That is why his second name is so unusual, as Spaniards write in the names of both parents in a passport. That is also why his background is so diverse — he spent several years in Grazer AK’s academy in Austria before the family returned to Serbia.

Dedicated, disciplined and willing to learn, SMS — as he is affectionately called in his homeland — has always been appreciated by his coaches, and one of them happened to be Alex McLeish. The former Rangers and Scotland manager arrived at Genk shortly after Sergej, and was responsible for gradually integrating the youngster into the starting lineup. The Serb started the 2014-15 season with the reserve team but finished it as a pivotal midfield general in the first XI, scoring five goals in the process.

“I went to see Sergej every week with the reserves and saw great quality,” McLeish recently told gianlucadimarzio.com. “He was exceptional in attack, but not in defence. So we talked, and I showed him how he can improve his game.

“He immediately understood everything and told me that he would change his attitude. We worked very hard in order to turn him into a box-to-box midfielder. I explained that he had to keep running after losing the ball,”

The youngster was converted from a playmaker to a complete all-round performer, and numerous clubs were following his progress closely in 2015, including Manchester United. The interest grew significantly when Sergej won the Bronze Ball at the Under-20 World Cup in New Zealand, which Serbia sensationally won by beating Brazil in the final. That was not his first international success, as he also lifted the trophy at the Under-19 European Championship in 2013.

With such a positive and winning mentality, it is easy to see why the future looked bright for Sergej, and Lazio — especially their sporting director, Igli Tare — deserve immense credit for signing him for just €9 million after a single season at Genk. Just like in Belgium, it took the midfielder several months to find his feet, but he then became unstoppable, and his market value might have grown 10 times.

The 2016-17 campaign was sensational for Sergej, whose influence grew under the guidance of Lazio coach Simone Inzaghi. At the very heart of the attacking moves, he also contributed defensively, making crucial tackles and interceptions. Tireless and intelligent, he mentions Manchester United and Serbia midfielder Nemanja Matic as his role model, but the 22-year-old is more mobile and possesses more of a threat, as his seven goals in all competitions proved last term. The current season has been even better, with six goals to his name already.

Juventus were mentioned as potential suitors, with Massimiliano Allegri an admirer, while former Juve striker Fabrizio Ravanelli stated in the summer: “Sergej is a fantastic player who has everything — speed, dribbling, physical strength and game vision. I watched him in the Italian Cup final against Juventus, and he is a complete player.”

Juve won that final 2-0 , but were even more impressed with the Serb when Lazio deservedly beat them 3-2 in the Super Cup in August with him calling the shots. Lazio are unwilling to sell him to Serie A rivals, though, and that should make a Premier League move more likely.

“Sergej can make it to the top level, because in addition to phenomenal talent he is totally committed to football. Contrary to many Serbian stars, he is able to ajdust to different circumstances mentally,” Serbian journalist Vladimir Novakovic told ESPN FC.

He is a self-confessed Real Madrid fan since early childhood, but following his brother’s footsteps to Old Trafford could be an option, especially since he now plays for the national team alongside Matic.

The biggest mystery in Serbia was national coach Slavoljub Muslin’s strange refusal to call him up throughout their World Cup qualifying campaign. Eventually, the issue proved to be one of the major reasons for Muslin’s downfall, because he was fired despite successfully guiding the team to the finals in Russia. With the Lazio star making his belated debut in October, he is destined to start next summer, where his price could skyrocket.

With that in mind, Sergej could prove to be a hot property during the January transfer window. But would anyone be able to get him?