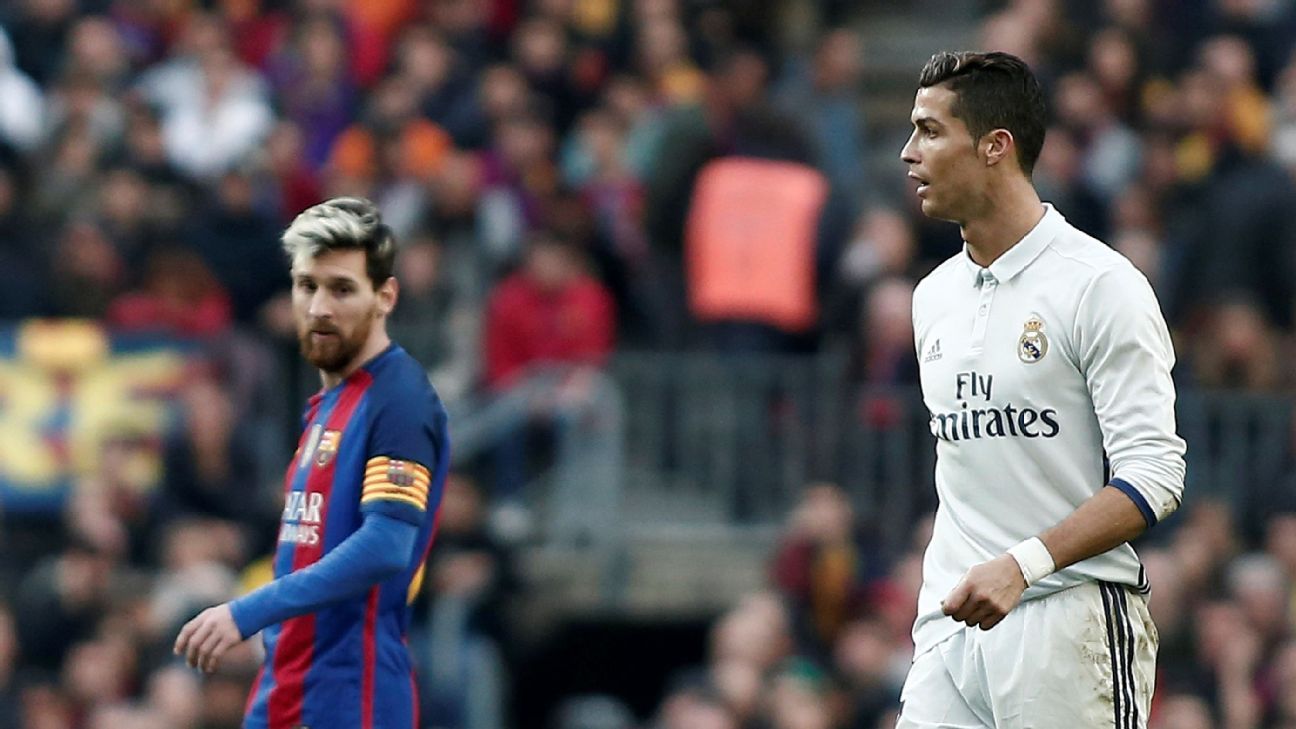 1. Title on the line

The season’s first Clasico is a must win for Madrid, as even a draw would leave them 11 points off the top (albeit with one game in hand) and likely focusing on cup competitions after the winter break.

Zidane’s side have not been at their best this season, especially in front of their own fans. At the Bernabeu they have struggled to convert possession into goals all through the autumn, and points have been dropped against Valencia, Levante and Real Betis.

But when they do hit form, often on the biggest occasions, they are more than capable of beating anyone. The 5-1 aggregate hammering of Barca in last August’s Spanish Super Cup showed their potential.

They need something similar on Saturday or any chances of retaining their title will be over before Christmas.

The aftermath of Sunday’s World Club Cup final was understandably focused around Cristiano Ronaldo, after the match-winner used the spotlight to again throw doubt on his long-term future.

After starring as Madrid won five trophies in 2017 — and personally adding all the individual prizes available including a fifth career Ballon d’Or — Ronaldo clearly feels it is just not right that both Lionel Messi at Barcelona and Neymar at Paris Saint-Germain are now paid more by their clubs.

Club president Florentino Perez has a quite different perspective, feeling that Ronaldo still has three and a half years left on a bumper contract he agreed just 12 months ago, is 33 next February and has few realistic suitors.

Both viewpoints are understandable, but something is going to have to give. Zidane remains stuck in the middle, with the situation testing even his impressive ability to calmly put out fires which have badly burned other coaches through the years at the Bernabeu.

Should Ronaldo personally guide the team to a Clasico win on Saturday, his position will be the stronger. If not, 2018 might bring some surprising shake-ups around the club.

Madrid’s famed “BBC” trident strikeforce of Gareth Bale, Karim Benzema and Ronaldo have not been on the pitch together at all since last April’s Clasico defeat at the Bernabeu. Suspensions and injuries have since allowed Zidane to “evolve” the team’s shape, with playmaker Isco becoming a regular fixture in a midfield four.

Bale’s return to fitness, where impressive cameos off the bench at last week’s Club World Cup earned “phoenix from the flames” local media praise, mean the coach now has a decision to make.

Benzema’s woeful form and confidence, also evident in Abu Dhabi, may offer a way out, although Zidane appears loathe to drop his fellow Frenchman. It is a difficult decision, for both tactical and political reasons, that he must get right.

Barcelona have won three of their last four La Liga visits to the Bernabeu — with Blaugrana talisman Messi usually to the fore, most recently with his late winner last April.

Ex-Madrid midfielder Xabi Alonso last week revealed how Madrid learned to deal with Messi during Jose Mourinho’s time in charge, and the side’s current “holder” Casemiro has talked openly about the physical approach he favours in dealing with his fellow South American.

Zidane will also recall that Mateo Kovacic did an excellent man-marking job on Barca’s main (only?) creative fulcrum in August’s Super Cup clashes. Playing both Casemiro and Kovacic might make tactical sense but could be difficult to justify to fans and pundits given the “must-win” situation.

Madrid’s final game of 2017 will likely give some final pointers as to if and how Perez and Zidane will strengthen the squad in the new year.

The summer exits of Alvaro Morata, James Rodriguez and Pepe have lead many at the Bernabeu to say the squad lacks depth and experience, with even Ronaldo placing himself within this camp . Others, including club captain Sergio Ramos, say the situation is not so bad, and talented youngsters like Marco Asensio and Dani Ceballos deserve time and space to develop.

Saturday’s game is likely to show us if the kids are ready. Should Zidane decline to use his bench, especially if the game is going against his side, then the pressure for the club to add some more senior options when the window opens will be huge.