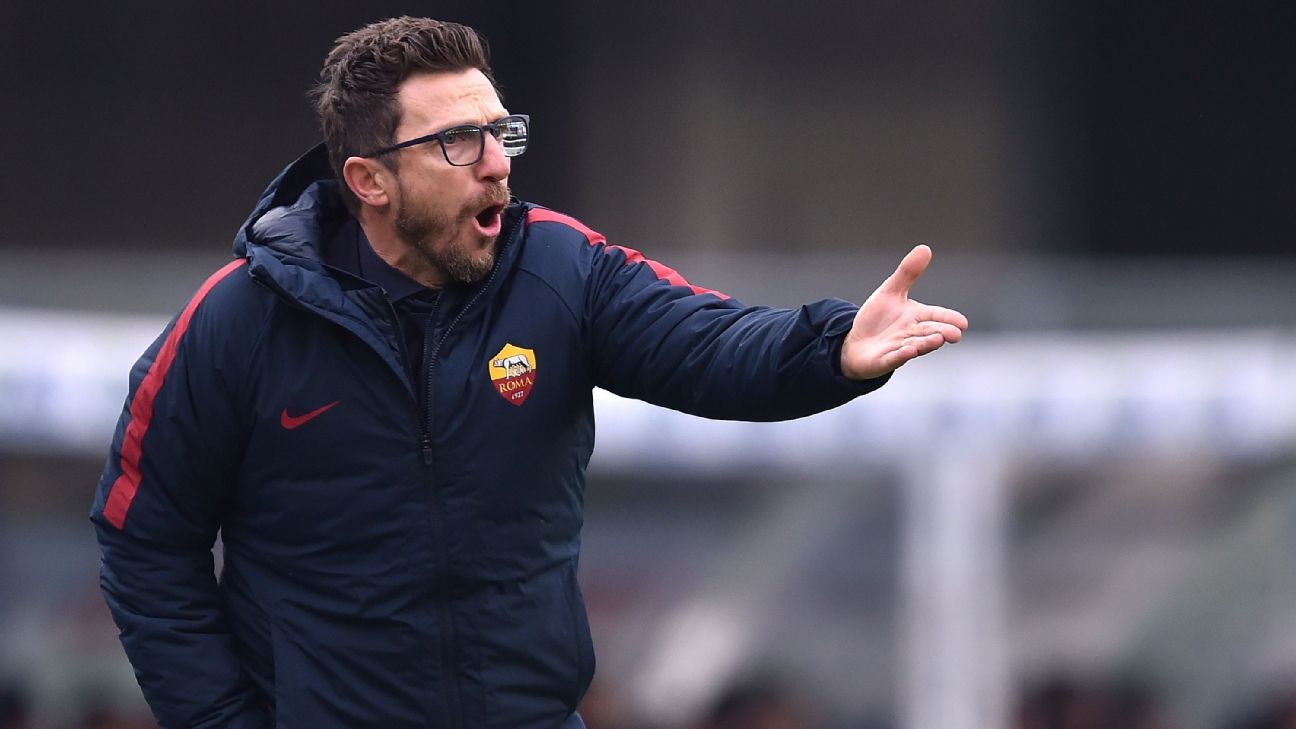 
Eusebio di Francesco firmly believes his experience as a Roma player will come in handy as Roma’s manager. Rather than listen to the noise forever buzzing around the club, he drowns it out.

For example, you won’t catch the 48-year-old listening to the capital’s many radio stations dedicated to the team. “Every day we let everyone have their say [on Roma],” Di Francesco told La Stampa earlier this week. “From artists to stand-up comedians.” Every man and his dog. “It’s not easy to switch off from the environment surrounding you… You just need to know how to take it.” With a pinch of salt a lot of the time.

“If I were to take every single question put to me, it’d be a waste of energy.” The “dynamics are not unknown” to Di Francesco and more than in other jobs, that’s a big advantage here, where the mood can change in a blink of an eye.

Surprisingly for a stranger in a foreign land, Roma’s new sporting director Monchi also got it immediately. His powers of perception evidently extend beyond finding value on the transfer market. “Here they have to discover the existence of the colour grey,” he observed in La Gazzetta dello Sport. “It’s not possible that after a win all of a sudden it’s like you’ve already won the league and then after a defeat to Napoli you’re no better than fourth… We’ve got to find [shades of] grey.”

Going into this weekend, however, the perspective on Roma remains black or white. On the one hand, that’s because they play Juventus on Saturday night in a tantalising clash at the top of Serie A, where four teams find themselves separated by just four points. On the other, it’s because reaction to their elimination from the Coppa Italia at the first time of asking hasn’t exactly been measured. Roma lost 2-1 at home to Torino on Wednesday and kissed goodbye to arguably the most winnable piece of silverware they were competing for this season.

When Di Francesco was announced as Roma’s new manager, he expressed his belief he could improve on last year. Many were sceptical in light of some significant exits — Wojciech Szczesny, Antonio Rudiger and Mohamed Salah — and the fact his predecessor Luciano Spalletti had just led Roma to their best ever season from a statistical point of view. But Spalletti didn’t actually win anything in his second spell. This is what Di Francesco had in mind when he spoke about doing better.

“There’s great regret,” said Stephan El Shaarawy. “It was a big objective for us.” Asked to apologise for Roma’s earlier than expected departure, Di Francesco didn’t see why he had to. The reason he gave was understandable. “I will never apologise,” he said. “You only apologise if you didn’t give it your all.” And Roma did just that.

For all the criticism of Di Francesco’s decision to make 10 changes from the team that beat Cagliari at the weekend, Roma did enough to get at least a draw. OK, so centre-back partners Juan Jesus and Hector Moreno had only played once before together all season. But that was in a 1-0 win away to the same opponent. Also in defence, Emerson Palmieri made his first start since recovering from a serious knee injury suffered in May, looking rusty for it. But you can understand Di Francesco seeing the cup as an opportunity to give the Brazil international some game-time and hand the excellent Aleksandar Kolarov a well-deserved rest in view of Saturday’s trip to Turin.

Judged excessive on this occasion, rotation has been an undoubted strength for Di Francesco and Roma this season. Only Juventus have used more players and it’s easily forgotten that Alessandro Florenzi, Daniele De Rossi and El Shaarawy started on the bench when Roma put in arguably their finest display of the season against Chelsea at Stamford Bridge. Torino made the most of Roma’s players not being all on the same wavelength, but that doesn’t tell the whole story.

Not for the first time this season, Roma cursed their luck — or lack thereof. As against Inter, they hit the woodwork on three occasions: that makes it 16 times this season. And as against Chievo and Cagliari, goalkeeper Vanja Milinkovic-Savic, brother of Lazio’s Sergej, had the night of his life, saving an Edin Dzeko penalty among other things.

On the whole, getting knocked out of the Coppa Italia shouldn’t alter the general assessment of Roma’s season. So far they have exceeded expectation and fears that Di Francesco might look out of his depth in the first big job of his career were wide of the mark.

Type-cast as a disciple of the gung-ho Zdenek Zeman, all attack and no defence, Di Francesco has proven people wrong. Roma look rock solid. Their defence is the best in Serie A, in part because of the form of goalkeeper Alisson. Shows like the one he put on against Atletico at the Olimpico are why he is currently keeping Ederson out of the Brazil side. Often, though, he has nothing to do.

There have been three games this season when Roma haven’t allowed a single shot on target. The pressing game Di Francesco has implemented is so finely tuned that opponents very often can’t get near Roma’s goal. When they do, the chances they’re able to create are scrappy and rarely clear-cut. Nine clean sheets in 16 games is a phenomenal record and has helped to underpin Roma’s best start to a season ever, matching what they did under Rudi Garcia four years ago. Three points better off than they were at this stage last season, Roma still have a game in hand against a Samp side that, for the moment at least, don’t look the force they were a month ago.

Di Francesco’s team has the right balance of youth and experience. Kolarov has been the bargain buy of the season in Serie A, settling key games away to Atalanta and Torino, but he isn’t the only surprise. Di Francesco has regenerated Gerson, too. Written off as an expensive flop, the 20-year-old attacking midfielder from Brazil proved decisive in the 4-2 win on the road in Florence. Meanwhile, El Shaarawy is experiencing a renaissance under Di Francesco and Diego Perotti is also playing the best football of his career.

Di Francesco’s hand in all of this is clear. He has made this team his own in no time at all, but work still needs to be done in attack. Edin Dzeko is in double figures in all competitions but Roma currently rank sixth for goals scored in Serie A. Juventus, Napoli and Lazio have been far more prolific and in Di Francesco’s opinion, it’s simply of question of being more clinical.

“We won’t have all these chances in Turin,” said El Shaarawy on Wednesday — not when Juventus are playing the kind of shut down defence that brings six consecutive clean sheets. That stability hasn’t come with Massimiliano Allegri picking a team and a system and sticking with it. Allegri keeps chopping and changing. It makes Juventus harder to read. More unpredictable.

The principal difference with earlier in the season is attitude and application. With Roma, Allegri will have a better idea of how and who Di Francesco will play on Saturday. That’s no small advantage. A lot of attention will no doubt fall on Szczesny, Mehdi Benatia and Miralem Pjanic at the Allianz Stadium, all former Roma players who traded places to play in black and white. All have made big contributions to the Old Lady this year. Szczesny came up big for Juve in Athens a few weeks ago, and the Old Lady has all but forgotten about Leonardo Bonucci now that Benatia is playing so well. As for Pjanic, he was nothing short of sensational in last week’s 3-0 win in Bologna, the most impressive display Juventus have given all season.

It’s a big test for Roma, but one you feel they’re up to. In spite of the midweek setback, Di Francesco has got everyone, including Juventus, to take Roma very seriously indeed. Considering all the changes they went through in the summer, that’s no mean feat.