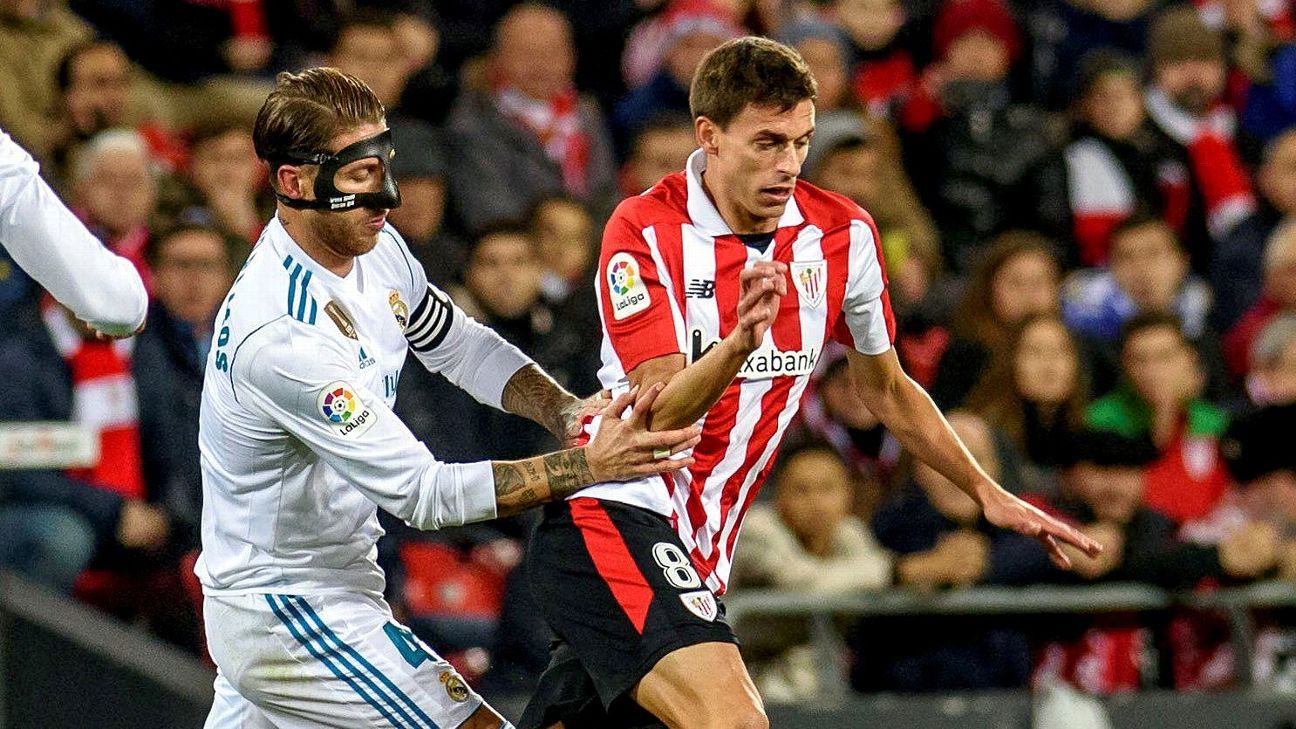 
The “other” Clasico, played as it should be on a wet, floodlit night in Bilbao, ended in a goalless draw, as Real Madrid failed to take advantage of Barca dropping points at home against Celta, thanks to a 2-2 draw.

For Athletic Bilbao, a draw against Real Madrid is a shot in the arm after a woeful run of results. There was a little refereeing controversy when the match official failed to play the advantage after Xabier Etxeita scythed down Luka Modric, with Cristiano Ronaldo clean through on goalkeeper Kepa Arrizabalaga.

Real had the home side pinned to the ropes in the last half-hour but couldn’t make the breakthrough. Zinedine Zidane will have been pleased with his side’s relentless pressing, if not with the result. At least the gap to Barcelona remains the same, but second-place Valencia could pull further away on Sunday.

Despite complete control in the second half, Real only managed four shots on target in total, and too often attacks broke like waves on the home side’s defensive rock for want of an accurate final ball. Circulation was poor throughout, and the attack rarely strung three passes together. Casemiro, Sergio Ramos and Dani Carvajal all earned suspensions for the visit of Sevilla next weekend.

5 — Zidane was able to field the same XI that started the Champions League final for the first time this season and duly waited an eternity to make any changes, further displaying a growing lack of trust in his bench.

GK Keylor Navas, 8 — Made several good stops: A reaction save from Aritz Aduriz and a fingertip stretch to deny Inaki Williams in the first half were followed by a good low stop from Aduriz after the break.

DF Dani Carvajal, 5 — Lucky to escape unpunished for an off-the-ball rugby tackle on Raul Garcia in the area, he eventually went in the book for a clumsy challenge on Inigo Cordoba in a performance lacking spark but quiet in defence with most of Athletic’s attacks driven by Williams on the right.

DF Sergio Ramos, 4 — Off the pace and clearly not a fan of his protective mask, the captain struggled to contain Williams and earned a yellow card for elbowing his regular sparring partner Garcia. Took his eye off the ball to allow Aduriz in and didn’t last the 90 minutes, as he took the striker out with another elbow five minutes from time to receive his 24th Real Madrid dismissal (in all competitions).

DF Raphael Varane, 7 — Got a foot in to deny Garcia early on and almost scored from a training ground free kick routine. Comfortably the best of Real’s defence, solid in the air and tidy bringing the ball out.

DF Marcelo, 5 — Ineffectual going forward in the first half and was often caught out of position, as is standard, at one point forcing Carvajal to race across to thwart Williams. Drew a fine save out of Kepa in the second but far from his best showing.

MF Casemiro, 7 — An attempted delivery straight to Kepa summed up his lack of contribution to the attack, and a loose ball on 70 epitomised Real’s evening. Went in the book for a challenge on Aduriz but made a vital, instinctive intervention in stoppage time and countered Athletic’s aerial threat.

MF Toni Kroos, 6 — A decent effort “a la Kroos” and one with the outside of his left boot that whistled past the post showed the German looked up for the task, and he topped 90 percent pass accuracy when others around him were losing their heads.

MF Luka Modric, 6 — Tried to make something happen with a game-high five dribbles but didn’t influence the match as he is capable of. Athletic’s packed lines of defence didn’t allow any room, and Modric was not alone in firing a blank.

MF Isco, 5 — Teed up Karim Benzema for a chance in an otherwise quiet first half. Appeared to be struggling physically a little in the second, and despite a few flashes of his genius was the first to be hooked, albeit on 80 minutes.

FW Karim Benzema, 5 — Rattled the post after cushioning the ball on his chest, but an error in his own half led to an Athletic opening. Dropped off considerably after the break but came alive again late on, seeking the pick to Athletic’s lock. His final ball often let him down, and he could have put Isco clean through but dallied and was dispossessed. The Frenchman and Ronaldo were tripping over each other at times in the same central areas.

FW Cristiano Ronaldo, 5 — Control deserted him in the first half, as he sent a simple ball out for a throw and fluffed a clear chance when he could have hit it first time. Smacked the foot of Kepa’s post with a wonderful shot on the turn and had a headed chance late on, but the new San Mames Stadium still thumbs its nose at the Portuguese.

MF Mateo Kovacic, NR — On for Isco with 10 minutes to go; first touch was a poorly hit cross.

FW Borja Mayoral, NR — On for Benzema in a double switch; had little time to make an impact.

Barca to turn to free agents Pogba and Alaba?
Barcelona renew interest in Liverpool’s Wijnaldum, Man City’s Garcia
Bayern Munich rebuild on a budget as Bundesliga largely looks to loans in transfer market
Robinho signing prompts Santos sponsor to end deal ‘out of respect for women’
Juventus to jump ahead of Arsenal for Lyon’s Aouar