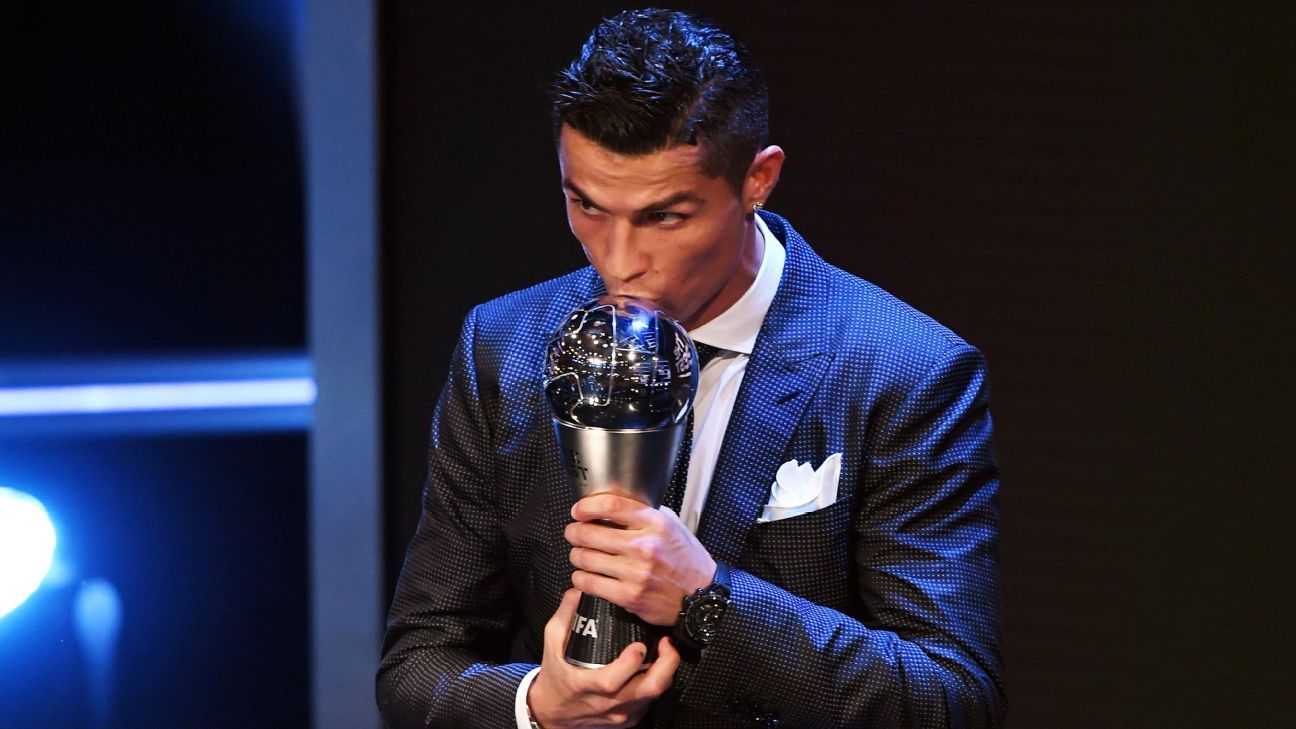 
Real Madrid emerged from a tuxedo-clad evening at the Best FIFA Football Awards 2017 with plenty of decorative trophies for the mantelpiece.

Cristiano Ronaldo won the award for the best male player at the London Palladium with 43.16 percent of the vote, while Zinedine Zidane beat Antonio Conte and Massimiliano Allegri to the title of best coach. The Madrid pair benefitted from a symbiotic relationship in 2016-17. Zidane’s strict adherence to rotation meant that Ronaldo remained fresh until the end of the season. In return, Ronaldo scored goals for his coach when it really mattered.

Ronaldo formed part of the FIFPro World XI along with four of his teammates. Marcelo, Sergio Ramos, Toni Kroos, and Luka Modric were also recognised for their part in a fruitful season at the Bernabeu.

“Madrid, with five players in the ideal team, return as the flag bearers of world football,” announced Alfredo Relano, the editor of AS, in his morning-after-the-night-before editorial.

It is difficult to dispute that Real Madrid have established themselves as the team to beat. But a glitzy night of individual awards does not represent a validation of the club’s recent success. The defining feature of Madrid’s success in the 2016-17 season was the collective, and the Champions League and La Liga trophies that sit in the burgeoning trophy cabinet are the true reward for that.

Individual awards in a team sport are ultimately flawed. They don’t matter. “No man is an island entire of itself; every man is a piece of the continent,” wrote English poet John Donne in his 1624 work “Devotions upon Emergent Occasions.” Donne’s statement pre-dates association football as we now know it by over two centuries. Yet it neatly sums up the folly of overemphasising the importance of The Best, the Ballon d’Or, or other such competitions. No player can be isolated from the team in which they operate, and a fixation on the individual is troublesome in team sport.

The fact that Ronaldo won the best male player does not necessarily demonstrate that he is better than Lionel Messi. And the same logic would apply if the Argentine had won the prize. Ronaldo won because individual awards at the top level of football have been reduced to which of Real Madrid or Barcelona — the clubs that Ronaldo and Messi represent — has achieved more in the last year.

After collecting his prize, Ronaldo was asked whether the hegemonic “Cristiano vs. Messi” era was coming to an end.

“Finishing?” he said with a smile. “It is beginning.”

To an extent, he is right. Neymar will find it difficult to break the duopoly until he wins the Champions League with PSG, regardless of whether he blossoms in to the best player in the world in the intervening period.

Last season, Real Madrid won La Liga for the first time since 2011-12, and became the first team to successfully defend the European Cup since Arrigo Sacchi guided AC Milan to back-to-back victories in 1988-89 and 1989-90. Ronaldo was a fundamental part of that success, and he should of course receive credit for that. The 32-year-old scored two goals in the Champions League final against Juventus, which took his tally to 10 goals in the last three rounds of the competition.

“He makes the difference in big games,” Zidane said of his talisman at the London Palladium. The French coach made a pertinent point. A combination of Real Madrid’s collective achievement and Ronaldo’s unerring ability to contribute in vital matches resulted in him winning a fifth individual prize in the last four years.

A double-page photograph of Ronaldo and Zidane adorned the inside cover of Marca on Tuesday morning. “The best actor and the best director,” trumpeted the headline. A line in the subtitle was particularly eye-catching: “the next challenge, the Ballon d’Or”.

The next challenge — for both Ronaldo and Real Madrid — is unequivocally not the Ballon d’Or, another accolade that massages the ego of the winner but means very little.

Nothing tangible will have changed when the Madrid contingent return to the Spanish capital from an evening of back-slapping in London. Real Madrid remain five points behind Barcelona in La Liga. And on a personal level, Ronaldo remains in a poor run of form. One goal and one assist in 450 minutes of league football falls short of the high standard he sets.

The challenge is not the Ballon d’Or, which continues despite its affiliation with FIFA coming to an end. The challenge is the defence of La Liga and the Champions League. In 20 years, the 2017 Best FIFA Football Awards will be a footnote that has long since faded in the mist of time. Trophies, on the other hand, are eternal.

Tottenham’s lack of ruthlessness hurt them vs. West Ham and will stop them competing for trophies
Juventus to bump ahead of Arsenal for Lyon’s Aouar
Liverpool’s Van Dijk to see injury specialist amid fears of cruciate knee ligament damage
Juventus to prep shock €400m bid for Kylian Mbappe
Barca to turn to free agents Pogba and Alaba?