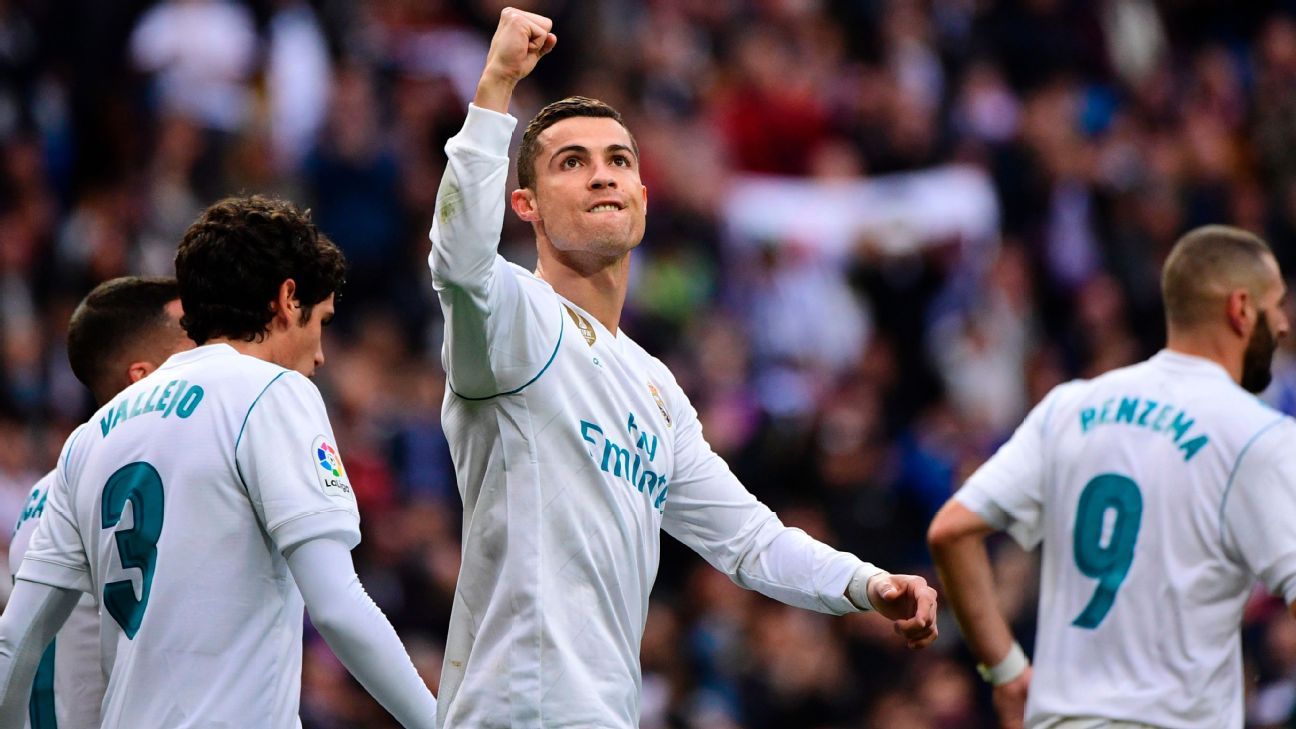 
Cristiano Ronaldo celebrated his fifth Ballon d’Or award with a brace as Real Madrid swept past Sevilla 5-0 following a blistering first-half display at the Bernabeu.

His two quick goals raised his career tally against Sevilla to 27 in 18 games in all competitions, the most against any opponent.

Real simply had too much firepower for a Sevilla side who had started Saturday behind their hosts only on goal difference.

Nacho fired the home side ahead after just three minutes, with Ronaldo slotting home a second before adding another from the penalty spot in the 30th minute.

Toni Kroos finished off an excellent team move to make it 4-0 before teenage defender Achraf Hakimi grabbed his first senior goal on 43 minutes to leave Seville stunned before half-time.

Real Madrid coach Zinedine Zidane made some seven changes from the midweek Champions League match against Borussia Dortmund, with Nacho filling in at centre-back with captain Sergio Ramos suspended.

The hosts, who are heading out to the United Arab Emirates to play in the Club World Cup next week where Gareth Bale is expected to return from a calf injury, went ahead after just three minutes.

Kroos floated a corner over from the right, which defender Simon Kjaer and also striker Luis Muriel tried to clear, but only managed to divert it back into the six-yard box where Nacho lashed it home to give Real the perfect start.

Any hope Sevilla — who had won their last three La Liga games — held of mounting a recovery evaporated as Los Blancos were 3-0 up by the half-hour mark.

In the 23rd minute, Marco Asensio slipped Ronaldo through into the right side of the penalty area, and the Portugal striker coolly dispatched a low shot past Sergio Rico at the near post.

Real soon added another from the penalty spot after a handball by Jesus Navas, Ronaldo’s effort creeping in off the body of the Sevilla keeper, who had guessed the right way.

Ronaldo played his part in Real’s fourth, winning the ball in the centre circle before sending Kroos to sprint forwards and knock the ball out wide to Lucas Vazquez on the right.

The German continued his run into the penalty area to meet Vazquez’s cross with a superb first-time sidefoot finish in the 38th minute.

It was 5-0 three minutes before half-time when right-back Hakimi netted his first senior Real Madrid goal after being played in on the overlap by a clever lay-off from Karim Benzema.

With the match all but over as a contest, it was no surprise the tempo dropped for what was a low-key second half.

Benzema went close to a sixth when, in the 67th minute, his header came back off the post.

Real Madrid scored four goals at home for the first time since May 17 — also against Sevilla — and extended their home winning streak against the Andalusian club to 11 games.