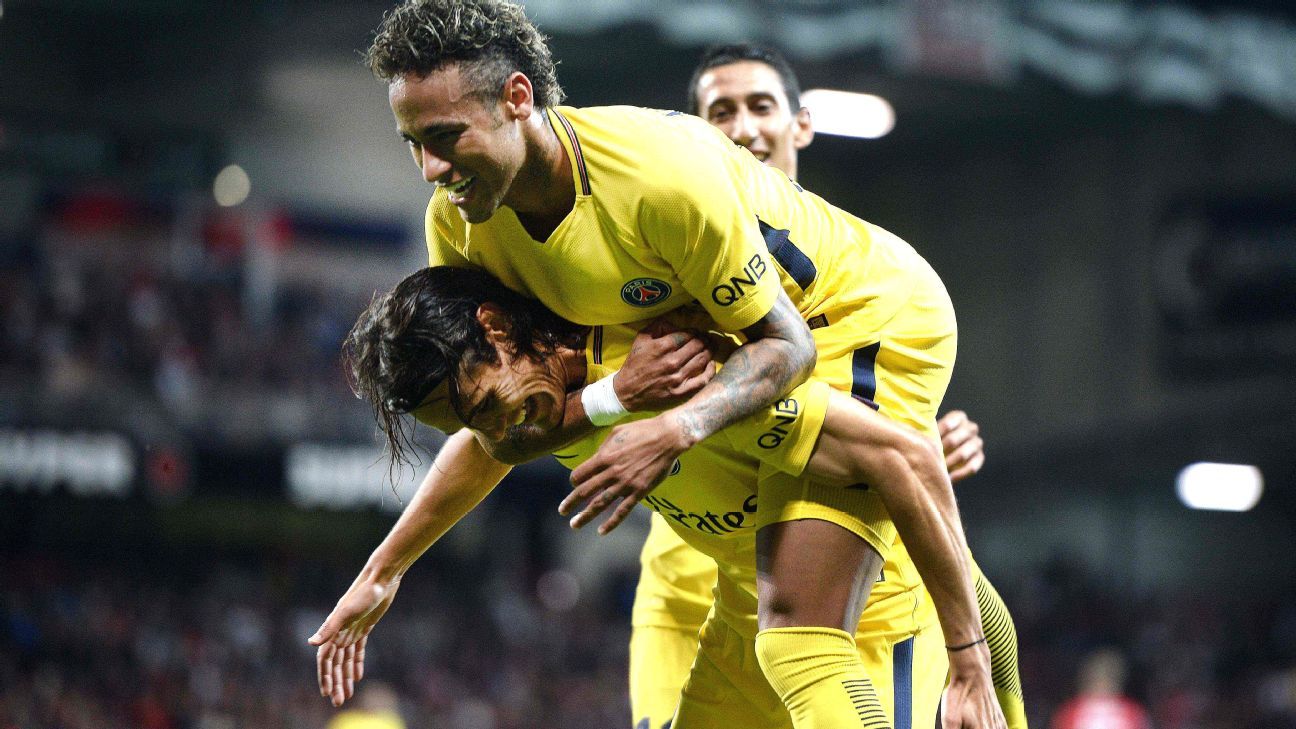 
PARIS — Paris Saint-Germain coach Unai Emery has praised “intelligent” duo Neymar and Edinson Cavani but claims they “need each other” as the Ligue 1 title race heats up.

Fresh from their 7-1 thrashing of Celtic in the Champions League on Wednesday, PSG will travel to the principality to face Ligue 1 title rivals AS Monaco on Sunday with a six-point lead.

Asked about Neymar and Cavani at his pre-match news conference at Camp des Loges on Friday, Emery was firm in his belief that the pair can be world beaters.

“Neymar and Edinson both possess the quality to be the best in the world,” the Spaniard told journalists. “Their characters heavily influence their performances on the pitch.

“They are intelligent — they know that they need each other but also their teammates, in order to balance the attack.

“They know their role when they have the ball, their relationship on the pitch with their teammates and how to give the best options to demonstrate their qualities as part of an attacking trio. It is important for me and for them to know how to play together.

“They are performing to the best of their capabilities, for the team and for themselves.”

When the inevitable question of penalty duties between the two surfaced again, Emery said: “these are internal matters and they will stay that way — I have spoken with the players and I explained my decision.”

Rumours of Neymar already leaving PSG for Real Madrid were branded “nothing” by Emery, who added that the Brazil international “is here and he is good here”.

Meanwhile, Sunday’s clash at Stade Louis II will be Kylian Mbappe’s first match against his formative club as a PSG player.

Emery admitted that it will be a “special” occasion for the France international and Les Monegasques.

“I have spoken with Kylian,” Emery said. “Our style of play is different. Before, he played in the middle and now he is more to one side.

“Lots of teams play with a low line of defence against us. There is less space behind our opponents. He must learn how to play in these small spaces. He is developing very well. He is here thanks to his feats with Monaco but he wants to grow with Paris.

“On Sunday, it will be the first time that he returns to Monaco as an opponent. I think he will be normal on the pitch. It will be something special for Monaco and for Kylian but this time he will be wearing our colours.”

Emery acknowledged that his PSG side will be coming up against a wounded Monaco after their exit from Europe in midweek.

However, the 46-year-old is wary of the traditional difficult task of coming away from the principality with all three points.

“They were disappointed in the Champions League but in Ligue 1, they have the same number of points that they had this time last year [29],” Emery pointed out. “We are better than we were at that time, which is the difference.

“They are very strong at home — they beat Marseille 6-1. Historically, this is a tough game for us. We have won there just once in our last seven meetings with them. This is a big match.”

Monaco coach Leonardo Jardim admitted himself that he and his players “failed” one of their major objectives for this season and recognised the gulf between his team and PSG.

“We failed in our objective of qualifying for the next round of the Champions League,” the Portuguese said during his pre-match press conference on Friday. “Now we must move on and think about something else, other objectives — Ligue 1 and both domestic cups.”

“The league is more competitive this season. PSG are above everybody else and then there are four or five teams who will compete for the podium places. PSG are always the favourites but even more so this season.”

Barcelona and Real Madrid have their issues, but who needs to win El Clasico more?
PSG’s Mbappe intrigued by Liverpool move ahead of Real, Barcelona
Merseyside Police investigate Pickford Richarlison social media threats
Messi not at his best this season
Lewandowski, Modric, Kaka and the biggest misses from the Ballon d’Or Dream Team