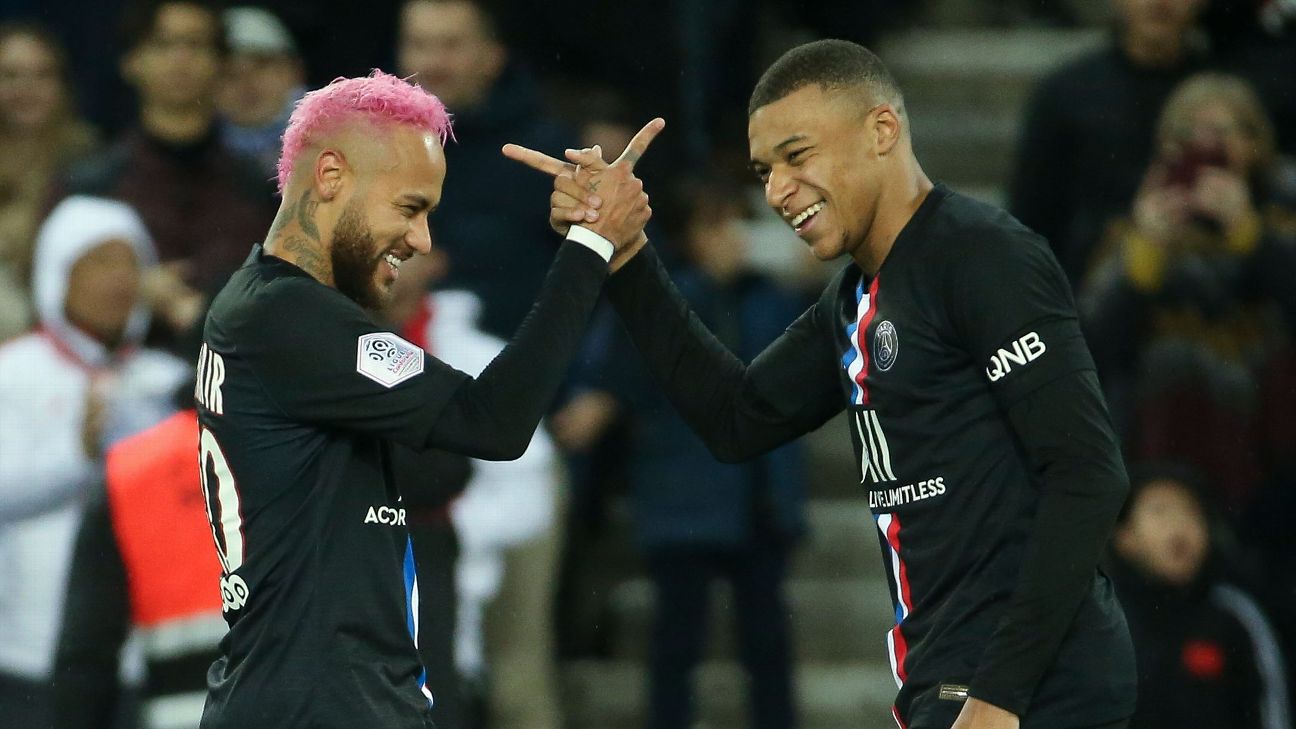 
Paris Saint-Germain sporting director Leonardo came to the defence of superstars Neymar and Kylian Mbappe after the French champions’ 4-2 Ligue 1 win over Lyon on Sunday.

France international Mbappe scored the hosts’ second goal, while Neymar was out injured with a rib problem but watched on from the stands at Parc des Princes.

Mbappe, 21, came in for criticism after his reaction to being substituted during the previous week’s 5-0 thrashing of Montpellier, while Neymar, 28, threw a well-publicised birthday party — even though it was supposed to be more low-key than usual.

“Neymar was born this way,” Leonardo told Canal+ of his compatriot. “God gave him his talent and what he is doing is tremendous.

“I am glad we are on the topic of Neymar as there was a lot of ‘We will see with his party,’ and ‘How will PSG handle this?’ There was no internal influence and the player knew what we thought. We also know how he is. There was no problem.

“Today, if we talk about the pitch, what are we saying? He is committed, very happy and a fantastic player. He is very fit. We are happy to have him. Wonderful.”

Instead of handing the floor back to the studio after answering the question on Neymar, Leonardo continued to challenge the recent portrayal of Mbappe as a spoiled child by large swathes of the media.

“We are also happy to have Kylian,” he said. “That is another thing. I have heard things said about him on a personal level that bother me.

“If a player storms off and talks back to the coach, OK, it is a mistake. We discuss it internally and settle the issue.

“To say that he is a brat and this or that, I do not accept that. He is an adorable guy, very committed, and a fantastic player.”

With PSG’s return to Champions League action fast approaching as the knockout stages near, Leonardo sought to protect Thomas Tuchel’s squad against criticism after their implosions against Barcelona, Real Madrid and Manchester United in recent seasons.

“We have the right to be happy from time to time,” he said. “Today, we are 12 points clear in Ligue 1, managed five wins and a draw in the Champions League group stage, while our players are in great shape for the highest level.

“Why should we be scared of a Champions League round of 16 clash? Honestly, I do not see it. Why? It is not life or death against Borussia Dortmund. I think the team is ready. If we win, great. If not, we will continue to grow.

“We are relaxed, as we must be. We want to reach the quarterfinals, the semifinals, and who knows, one day win it.”

Leonardo also expressed his hope that PSG can end the negativity surrounding the club in Europe by taking a big step forward for themselves and Ligue 1 on the continental stage.

“I am just saying there is some negativity that has started to come out,” he said. “It looks like preparation for a defeat, which I do not like.

“It feeds negativity. It would be good for France, not just PSG, to get to the final or better. I do not understand why we enter into this negativity.”

“We have to leave behind this ‘If we lose, we are dead’ attitude. No, it’s not life or death. We are going to play a match and hope to win.”