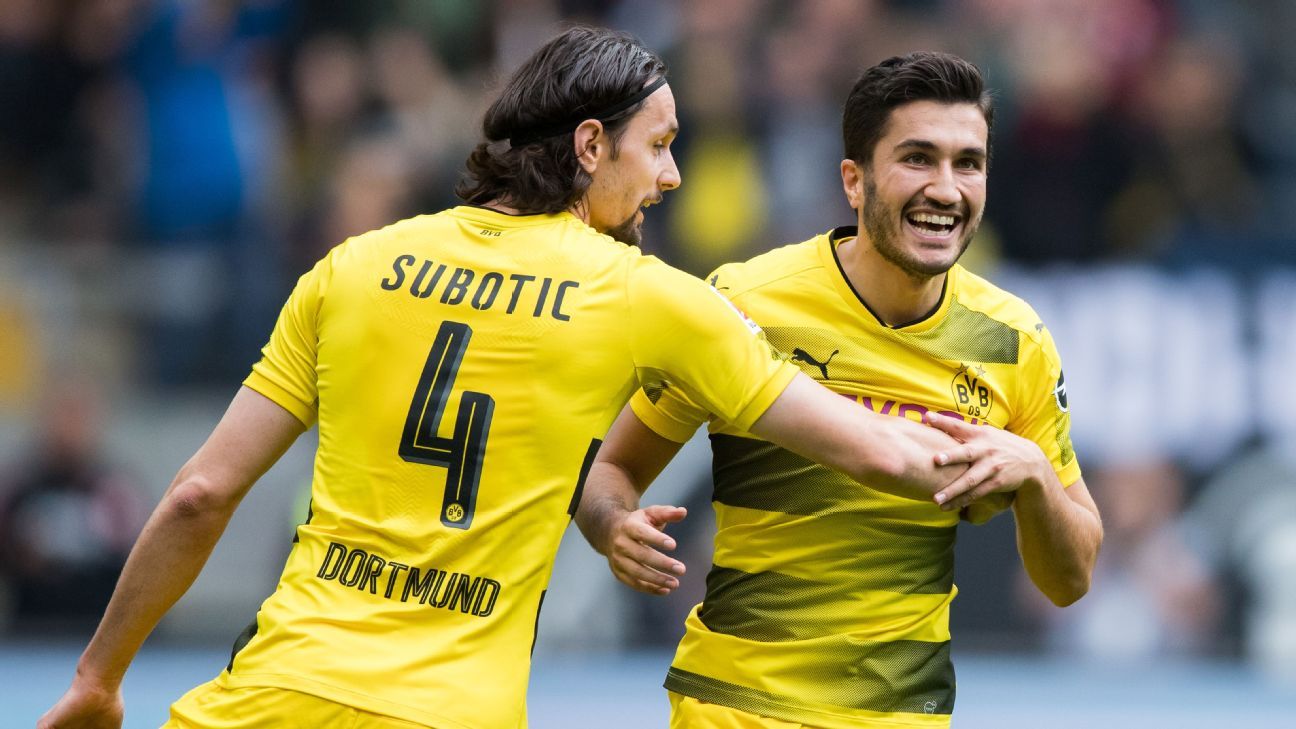 
FRANKFURT — Peter Bosz had no excuses for Borussia Dortmund failing to bring a 2-0 lead over the line as his side settled for a 2-2 draw in a tricky match away to Eintracht Frankfurt on Saturday.

“It was a very open match,” Bosz told a news conference. “Both teams had a lot of scoring chances.

“If you’re 2-0 up and have further opportunities to score then you must win the game. Sadly, we didn’t manage to do that.”

A sold-out Commerzbank Arena saw an open contest with action on both ends. The hosts had most of the chances early on but it was Dortmund, who took the lead after 18 minutes as Nuri Sahin poked home what looked like an attempted shot by Marc Bartra.

BVB goalkeeper Roman Burki had to intervene a couple of times before Maximilian Philipp doubled the lead for his team in the 57th minute, finishing a counter-attack with a precise shot into the bottom right corner past Lukas Hradecky.

But it only took 11 minutes for Frankfurt to level the score. First Ante Rebic was brought down in the box by Roman Burki in the 64th minute. Sebastian Haller converted the penalty before Marius Wolf’s shot hit the inside of the post to bounce into the net in the 68th minute.

In the final 25 minutes, the match remained a thriller with either team having chances to nick the match. Nuri Sahin had the biggest opportunity in the 90th minute after the shot of debutant Jadon Sancho was blocked but the Turkish international had his volleyed rebound from three yards out heroically blocked by Makoto Hasebe.

“I thought we had good periods, very good periods,” Sahin told ESPN FC after the match. “However, we also played too open. Especially after the 2-0, we were far too open. That must not happen.”

Asked why the match turned into such a wild affair, the 29-year-old replied: “It’s a road game in the Bundesliga, it’s a very loud stadium, those are factors that obviously influence the psychology of the match.

“When you score a second goal, either the opponent gives up or goes all-in. We conceded the 2-1 still relatively early and I looked up to see to the screen and saw that there were 25 minutes left to play, knowing we were in for a wild ride.

“But we had enough chances to kill the game. We had a chance to make it 3-1 in the form of Christian Pulisic for instance. Obviously, I have to score at the death of the game but we all know how football sometimes is. If I was a bit calmer, I may just slot it home in that situation.”

Sahin’s coach once again bemoaned that his team did not cleanly pass the ball in their own half, saying: “We didn’t play the football we’re capable of. Especially in build-up play from the back.”

Asked about his coach’s criticism about the uninspired build play Sahin told journalists: “It was three against three in midfield and we were man-marked, which doesn’t make things easier. Of course, you still have to try to find spaces.

“We did talk about that at half-time and I thought that we found better into the match through our full-backs. Still, even if you’re put under pressure there are options. We have three very quick players up front. I managed to pass to the ball to Maximilian [Philipp] numerous times in behind Frankfurt’s back line as well.”

Dortmund’s problems in build-up play may also have been caused by the newly aligned formation with defensive Julian Weigl moving into the centre-back slot next to Neven Subotic, who played his first competitive match since March 2016 in the wake of the injured Omer Toprak and suspended Sokratis Papastathopoulos, while Bartra and Jeremy Toljan filled the full-back positions.

Despite the dropped points, Subotic revealed after the game that he enjoyed his time on the field. He said: “There was an indication in Friday’s training that I may start but I could only be sure when it was announced in our team meeting later that day.

“Of course, I was elated. It felt a bit like a World Cup match — it doesn’t happen all too often. Even though I play a lot of football every day in training and do my best, but it’s a special feeling to be back on the pitch [in a competitive game].

“Whether I believe that I’ll get a chance? I think I could show with today’s performance that I can compete in the Bundesliga on a big pitch when it’s eleven against eleven and that I can help the team but obviously opportunities are rare at the moment for me.

“I give my best in training each day and I’m waiting for my chance. I’m ready at all times. Just call me, and I’m there.”

Borussia Dortmund’s once-five-point lead in the table has been closed down by Bayern Munich, who won 1-0 away to Hamburg on Saturday. The Black and Yellows remain first on goal difference and travel to Hannover on the following weekend with a trip to third-tier side Magdeburg in the DFB Pokal in between.