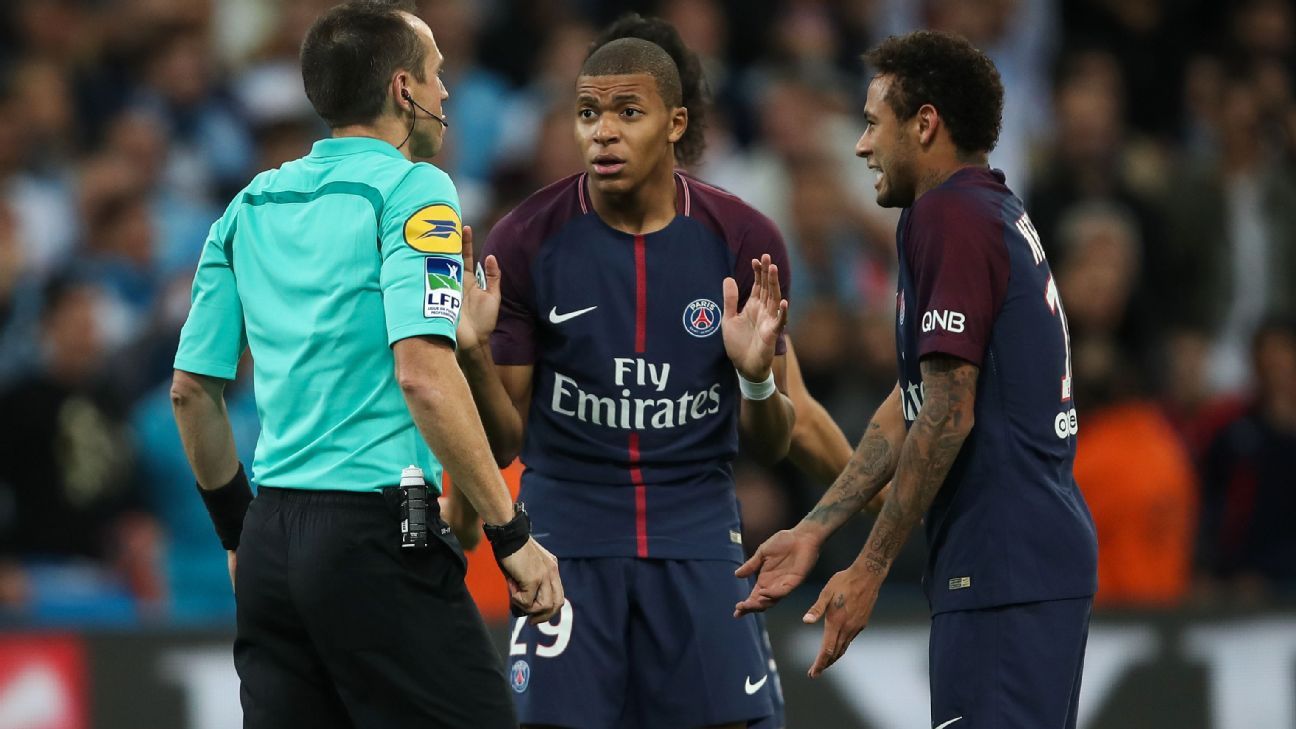 
PARIS — Paris Saint-Germain coach Unai Emery has said Neymar will learn from his dismissal during the 2-2 draw away to Marseille on Sunday but suggested the referee should have given him more protection.

Neymar, 25, scored once before he was shown two yellow cards in quick succession in Le Classique at Stade Velodrome last weekend but, speaking at his prematch news conference, Emery backed the Brazil star and instead suggested that referee Ruddy Buquet could have handled the match better.

“Neymar needs to adapt to Ligue 1, to our team and to the referees,” the Spaniard told journalists at Camp des Loges on Wednesday. “He is intelligent. He knows that what happened last Sunday will serve as a lesson moving forward.

“After the match, Marseille admitted that they got in our faces and that they were more aggressive in going after the ball than usual. It is important that the referees learn to keep control of a game not matter what the situation.

“For us, everything is clear. I spoke with Neymar about him rising above the provocation. When the match got underway, it is true that there was a lot of aggression. Players are also people. He will learn from all of the situations he finds himself in.”

Angel Di Maria was introduced as a substitute for the final 10 minutes in Marseille but barely touched the ball.

However, the Argentina international could now find himself in the starting XI against Nice at Parc des Princes on Friday because of Neymar’s absence.

Emery admitted that Di Maria is “unhappy” whenever he is a substitute but hinted that a strong performance against Nice could help his situation.

“Angel is a competitor,” Emery said. “When he does not play, he is unhappy but he works for his opportunities.

“He wants to play every match. When he is not going to be a starter, I tell him to be ready. I am happy with his work in training and his work when he takes the field.

“Perhaps this will be a good opportunity for him. If he plays, I am sure he will do some good things.”

PSG looked complacent against Marseille and their lacklustre showing has led to questions over their chemistry.

“No,” Emery said. “It is true that, when you play every three days, maintaining the intensity is not easy. The players are aware that we need to keep our standards high if we are going to win matches.

“Away at Celtic and RSC Anderlecht, we turned in performances that were complete in many respects. Away from home, we have plenty of motivation against sides who have decided to be very competitive with us. They need to work hard to impose their game on us in the hopes of getting a draw or a win.

“Preparation gives us a chance to analyse all the small details that we want to address in order to win matches.”

Emery said Thiago Motta has been playing with pain in his knee recently and will miss the visit of Nice this week, while Thomas Meunier could still be fit enough to feature on Friday and Dani Alves could return after missing Marseille.

“Thiago and Thomas did not train with the squad on Wednesday,” the PSG boss said. “Thiago played the last few matches with a bit of pain in his knee. He made the effort.

“After Sunday’s match, and after talking with him and the doctor, we decided it would be good for him to have a bit of a breather. So, he will not be in the squad for the match against Nice.

“Thomas has some muscle pain. It was preferable that he not take part in training recently, but he is doing better. If he can train on Thursday, he could play on Friday.

“As for Dani, he is working with the fitness staff and the squad. If all goes well, he will train on Thursday and be ready to play.”

After Nice, PSG host Anderlecht in the Champions League and travel to Angers in Ligue 1 before another international break.

Meanwhile, PSG chairman and CEO Nasser Al-Khelaifi was in Switzerland on Wednesday to be heard by prosecutors after a criminal case for suspected bribery was started, involving the Qatari and former FIFA secretary general Jerome Valcke.

Emery spoke with Al-Khelaifi in Marseille and said: “We spoke a little bit before and after the match — we only spoke about football.

“The president has the confidence and support of the entire squad. I am calm. The president is too. We want to continue to prepare for Nice in peace.”