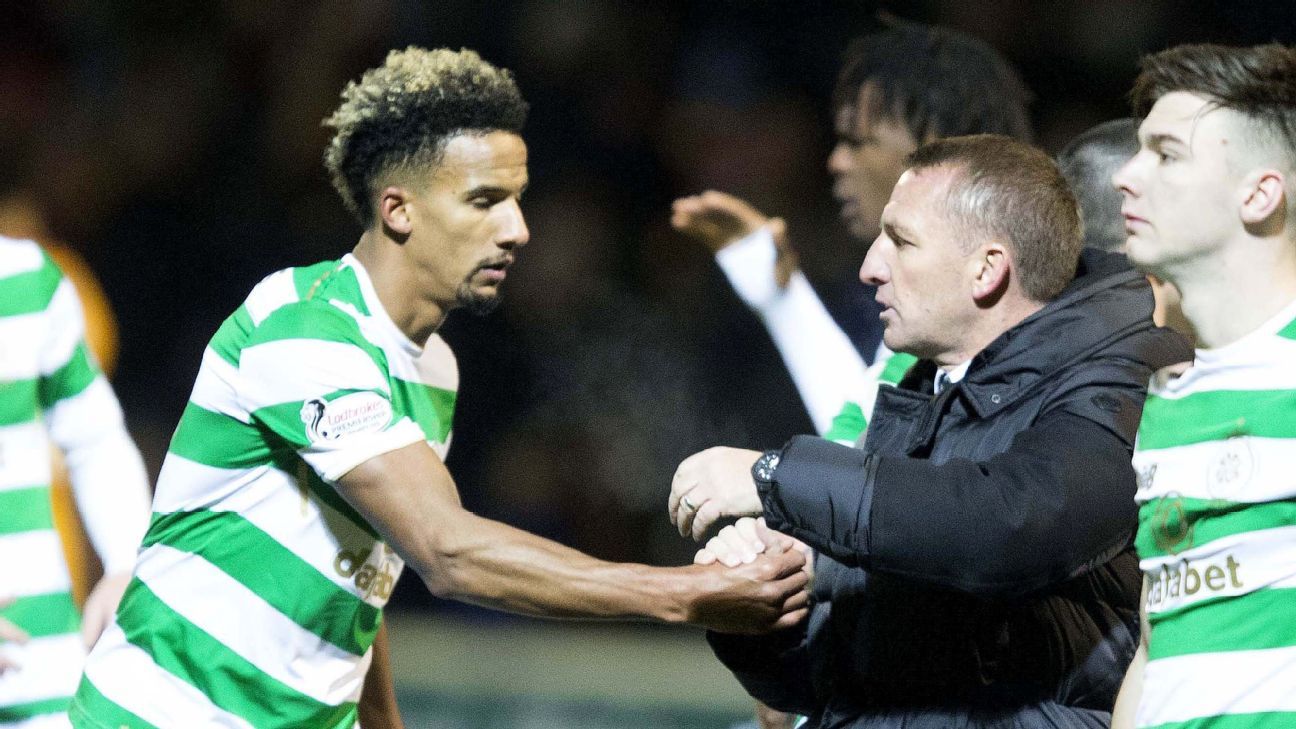 The league leaders, who had beaten their hosts 2-0 in the Betred Cup final at Hampden Park on Sunday, fell behind with 12 minutes remaining when Hoops right-back Mikael Lustig knocked the ball into his own net as he tried to clear a Craig Tanner free-kick.

However, with two minutes, after Callum McGregor went down in the penalty area under a challenge from substitute Andy Rose, Sinclair converted the spot-kick.

It was hard to take for the home side as Sinclair, who won a controversial penalty at the weekend when he went down easily under a challenge from Cedric Kipre, netted the late equaliser – but it showed the determination of Brendan Rodgers’ side.

The teams meet again at Celtic Park on Saturday, with more fireworks likely.

The home side showed three changes with Lithuanian winger Deimantas Petravicius making his first start since signing in the summer and Elliott Frear and Allan Campbell back in the starting line-up.

With French striker Moussa Dembele out with an injury picked up at Hampden Park, Leigh Griffiths returned to lead the line while Sinclair was replaced by Patrick Roberts.

However, only 11 minutes had elapsed when the on-loan winger from Manchester City had to go off – perhaps with a recurrence of a hamstring complaint – and was replaced by midfielder Tom Rogic.

Referee Willie Collum was working hard to keep control of a feisty game in which chances were at a minimum.

In the 20th minute, after a terrific crossfield pass from Rogic had released Griffiths, Well goalkeeper Trevor Carson pulled off a fine save from McGregor’s drive – with the Hoops midfielder narrowly missing the target with the rebound.

Carson’s save in the minute of added time was remarkable. Rogic split the Well defence open to find left-back Kieran Tierney, who found himself in the clear – but his drive from point-blank range was somehow blocked by the Fir Park keeper.

Celtic stepped it up at the start of the second half and Carson pulled off another fine save, this time from McGregor’s low drive from outside the box.

On the hour, as the game stretched, Motherwell striker Louis Moult’s overhead kick from 12 yards just cleared the bar.

The Parkhead men raced back up the park and McGregor burrowed his way into the box again came close with an angled drive which escaped the far post.

Tanner replaced Elliott Frear in the 66th minute and moments later missed a great chance when he failed to connect properly with a Richard Tait cross, the ball flying off his head and wide before a left-footed drive was held by Hoops keeper Craig Gordon.

Sinclair was given stick by the home fans when he replaced Stuart Armstrong in the 72nd minute ahead of a frantic finale which saw Lustig, trying to defend a Tanner free-kick, knock the ball past the helpless Gordon.

The champions rallied and Rogic smashed a drive which rebounded off the post and back into the arms of Carson.

However, McGregor – after having a shot saved by Carson – went to ground following a challenge from Rose and Collum pointed to the spot, allowing Sinclair to slam in the leveller.