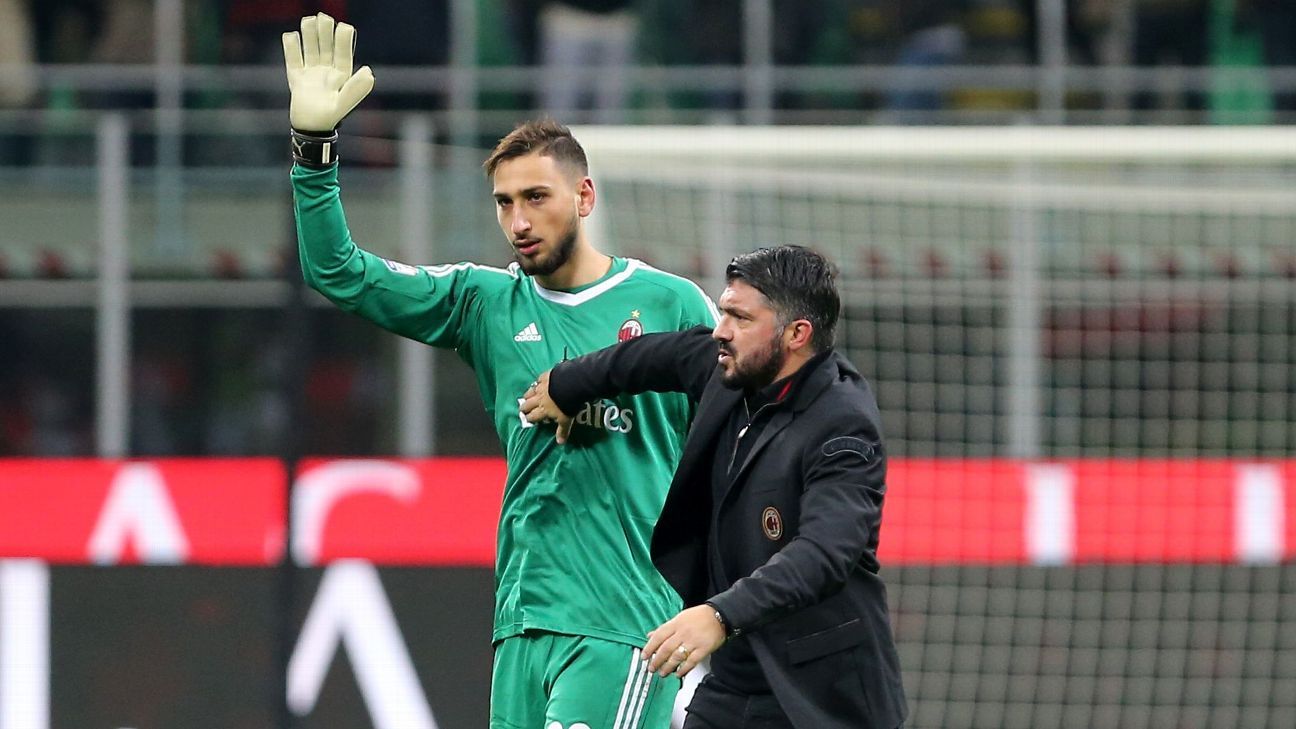 
After the furore surrounding his contract situation over the summer, it had been hoped that Gianluigi Donnarumma’s future wouldn’t be a talking point for at least another 12 months. Sadly, we haven’t even made it to the New Year and the AC Milan goalkeeper has spent the week in the headlines.

From talk of no release clause being in his contract renewal to chatter of an annulment and being put under pressure to sign a new deal. Add to the pot Mino Raiola’s ongoing involvement and speculation of an exit next summer, and we find ourselves in a familiar mess.

Then came Wednesday night with the Coppa Italia clash with Verona at the San Siro. Making his way out onto the pitch for his pre-game warm-up, he was greeted by a banner which read: “Moral violence, €6m per year and the signing of a parasite brother? Now go, our patience is finished”.

The section of supporters weren’t finished there, as jeers later rang around the stadium each time he touched the ball which led to him being consoled by Leonardo Bonucci both in the dressing room and on the pitch. It may not be as bad as the fake euros being flung at him during the summer, but it has developed into a nightmare once again.

Amongst this all though, the key is that not once have we heard any concerned party come out publicly and give credence to the rumours.

Gennaro Gattuso has insisted that Donnarumma hasn’t asked to leave. CEO Marco Fassone and sporting director Massimiliano Mirabelli echoed the same sentiment while Donnarumma himself broke his silence on Instagram. It was enough to dispel any truth in the rumours, and it was a positive response that will go some way to calm the latest backlash as many had been eager to hear from him.

“I never said, nor wrote, that I was on the end of moral violence when I signed the contract. Despite all of this, I look ahead with my mind on the next game…Forza Milan!” he wrote.

Meanwhile, Mirabelli and Raiola have engaged in another public war of words, but the facts are that Milan have made it clear that they have no intention to sell and they haven’t been informed by Donnarumma that he wants to leave. Should that situation change, the club would do what’s in their best interest.

With that in mind, it seems nonsensical to lash out at the 18-year-old, reducing him to tears in midweek. This past summer was different. The majority of us were deeply upset after he rejected the initial contract offer, which many of us viewed as a real slap in the face and a lack of loyalty given Milan had played a fundamental role in putting him in the position that he was in.

However, this feels different. Mere speculation has essentially sparked fury without enough substance to be angry with Donnarumma. In turn, it was difficult to watch and hear the reaction that he got in midweek.

Should he come out and confirm an intention to leave, then things would change. However, for now we must surely look at the facts and based on his statement on Instagram, he has ultimately rebuffed the speculation and wants to focus on helping Milan move forward.

It’s not a great time for the Rossoneri, on or off the pitch. From the voluntary agreement being rejected by UEFA, which will have potential negative repercussions next year, to the disappointing results this season. The problems are seemingly mounting at the club.

As a result, we could surely do without another controversial storm around Donnarumma again, and in fairness, Raiola’s recent lengthy statement to La Gazzetta dello Sport was relatively positive, albeit he’ll remain the villain moving forward as there’s always an air of him being behind such problems.

A January exit seems highly improbable unless there’s a shocking turn of events, and given the calm-natured reaction from Fassone and Mirabelli, they don’t envisage this becoming a problem between now and the end of the season.

Will it rear its ugly head again next summer? Perhaps. However, after being very vocal with my disappointment and frustration with Donnarumma at one stage this past summer, it’s arguably worthwhile to reflect on how things eventually played out.

Donnarumma signed an extension, reiterated that it was his personal desire throughout to remain with Milan, with Raiola conceding as much too, and he’s essentially repeated himself this week and tried to quell the anger around him. That speculation emerged from media talk, the opposite of which has since been put forward by those directly involved.

Milan are away at Verona on Sunday and so we won’t be able to measure the atmosphere until Milan return home to face Atalanta next week. Ultimately, while it’s not an ideal situation for Milan, Donnarumma or Raiola, the club have more pressing matters to be concerned with and that’s moving up the Serie A table and becoming a real force under Gattuso between now and May.