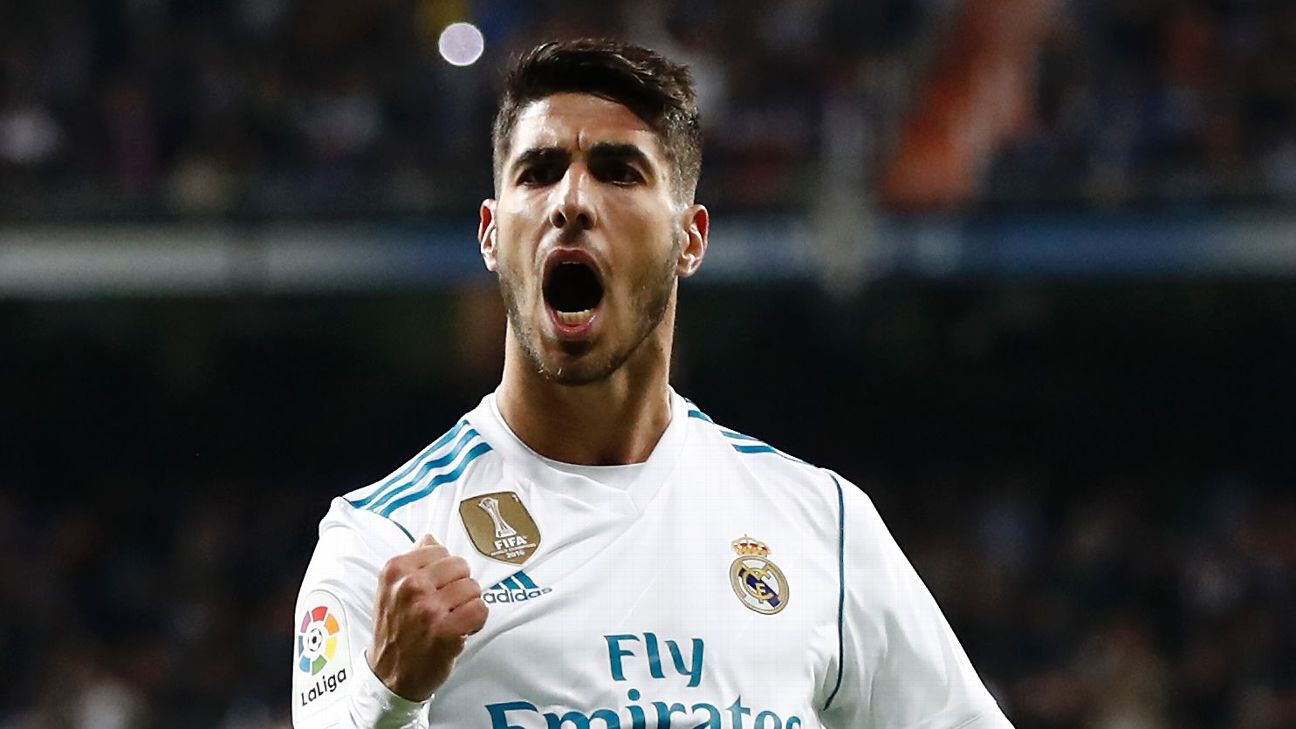 
Real Madrid’s Marco Asensio has denied that his situation is anything like that of former teammate Alvaro Morata, who left the Bernabeu last summer after growing frustrated at a lack of playing time.

Morata, 25, left to join Chelsea last summer after he was often left on the bench last season by coach Zinedine Zidane, despite scoring 20 goals over the course of the campaign after rejoining the club from Juventus in summer 2016.

That position of first reserve behind Cristiano Ronaldo, Karim Benzema and Gareth Bale is currently held by Asensio although some have begun to question why the 21-year-old is not used more, especially given the team’s struggles in front of goal.

Asensio, who scored on both his most recent La Liga starts, is expected to come into the XI for Tuesday’s Champions League Group H game at APOEL Nicosia, with fellow back-ups Jesus Vallejo and Dani Ceballos also in line to start due to Zidane’s rotation policy and injury list.

“Morata’s case is very different [than mine],” Asensio told the prematch news conference. “When he returned to Madrid, he wanted to be more important. I am 21, just starting out in this. I always want to take advantage of the playing time I get from the coach, whether 15 or 20 minutes, or when starting, so that I can be counted on for important games in future.”

Despite his young age, Asensio is already a player fans at the Bernabeu look to when the team are in trouble, and earlier this season he scored two long range goals to save a point at home to Valencia.

“I like to have responsibility and feel very comfortable bringing things to the team,” he said. “I do not feel under pressure, more that I like to have this pressure to demonstrate all that I can on the pitch. I’ve started the season well, scored goals, and I want to keep doing well for the team.”

Asensio was asked to sum up teammate Cristiano Ronaldo’s current mood, with the Portuguese having scored just one goal in the 2017-18 La Liga so far, but also netting six times in the first four Champions League group games.

“I see Cristiano very good as always, very motivated,” he said. “In La Liga he is not having luck in front of goal, but he always returns to form. He’ll get back to the numbers we are used to seeing.”

A win for Madrid in Nicosia will ensure passage to the round of 16, although a draw or defeat could mean the final group game against Borrusia Dortmund at the Bernabeu on Dec. 6 becomes a qualification eliminator.

“We have come here to win the game,” Asensio said. “We know Champions League games are always very demanding, they are a tough opponent, even more at home. They need to win to stay alive in the competition. But we want to ensure we qualify for the last 16 and play a good game.”

Phoenix Rising coach Rick Schantz returns from administrative leave
High-flying Leeds, Villa suggest this Premier League title race could be the best one ever
PSG’s Mbappe intrigued by Liverpool move ahead of Real, Barcelona
Cristiano Ronaldo adds shaved head to topknot, braids and highlights in the many phases of his hair
Philadelphia Union vs. Toronto FC – Football Match Report – October 24, 2020