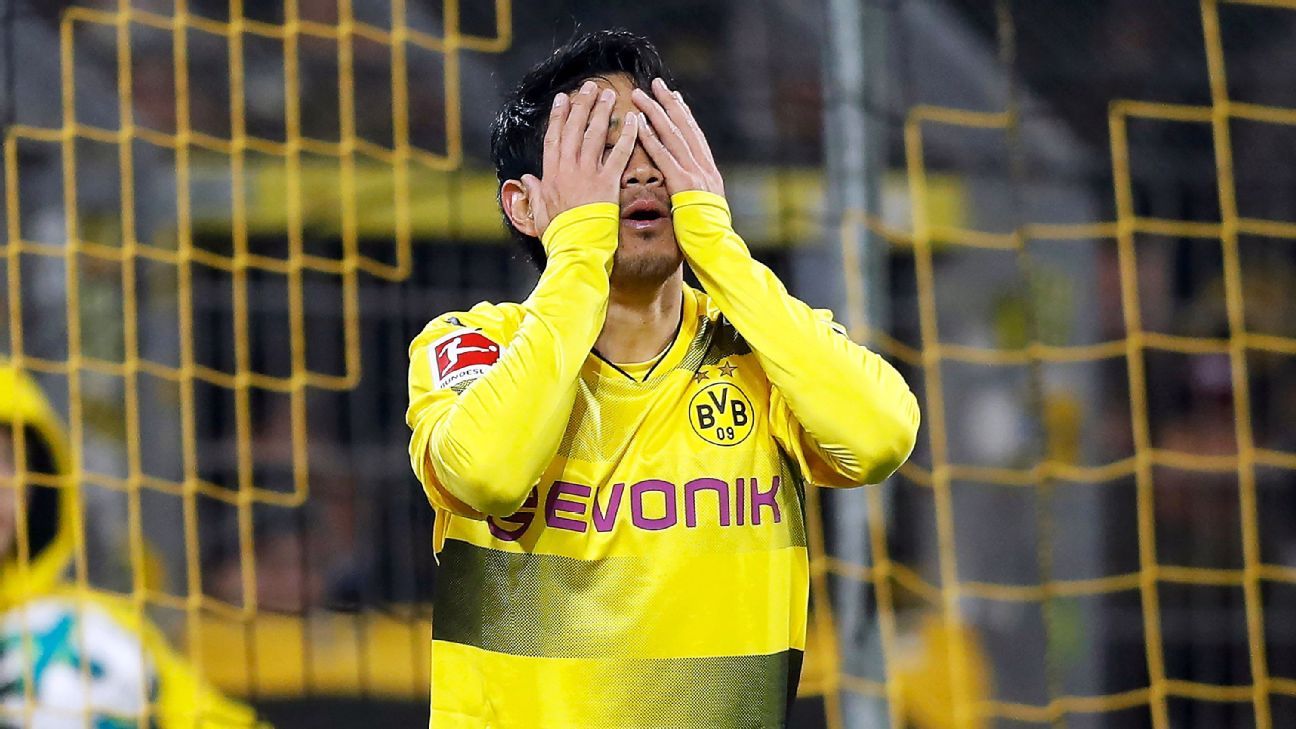 The Black and Yellows saw their winless streak extended to eight games in the Bundesliga, during which time they’ve plummeted from first to seventh place, and Sport Bild and other German outlets reported that coach Peter Bosz would be sacked on Sunday following the latest setback.

But a visibly angry Schmelzer said after the game that the effort of the players was sorely lacking and deserving of the supporters’ jeers.

“Now is not the time for words but it’s time for us players to bust our butts,” Schmelzer said. “I’m not in the mood to talk about what happened today. I’m just pissed off about how we present ourselves here at home. It’s extremely annoying.

“Three days ago, I said that it’s nice for everyone to play in Madrid [in the Champions League] but it’s about showing the passion in the Bundesliga’s everyday life and wanting to achieve the turnaround, which is why I find it completely understandable that the fans boo.

“If you do everything in your power but you shoot the ball against your teammate’s head three times and do not win a point because of that, then it’s OK — but if you present yourself the way we did today barring the 15 minutes when we actually played football, that’s an absolute impudence.”

Schmelzer did not seek fault with his coach, however, saying: “The coach is the poorest sod. It’s us players, who shoot the ball out of bounds, who do not defend the goals, who can’t defend set pieces. The coach can’t sub himself on and score the goals himself.

“I’m sorry if I keep repeating myself on a weekly basis but it’s us players [who are at fault] and today’s game is annoying me so much.”

Bosz had described the match against 17th-placed Bremen as a “must-win” but the hosts were trailing 1-0 at halftime, having recorded only three attempted shots, of which two were blocked.

Despite three formation changes in the first half, Dortmund could not find ways to unlock Bremen’s defensive block while their own timid defending allowed Maximilian Eggestein to bring the visitors in front after 25 minutes.

BVB showed a different attitude coming out of the locker room in the second half, with Nuri Sahin and Andre Schurrle replacing the hapless Andrey Yarmolenko and Raphael Guerreiro. In the 57th minute, they made their dominance count and equalised with Pierre-Emerick Aubameyang pushing the ball over the line.

Dortmund, however, failed to turn the screw further and Bremen scored a deserved winner with 25 minutes to spare as Theodor Gebre Selassie headed home a corner.

Asked what Dortmund did better during the minutes they held the upper hand over Bremen, Schmelzer said: “We actually played football in those 10-15 minutes. Everyone offered himself [as a passing option], everyone wanted to turn this game around, helping each other out, showing options to the teammate who had the ball.

“Of course, it’s no fun for the fans if we always pass the ball backwards but if the players move as little as we did in the first half — and also after the equaliser — as if we had already won it — then it’s impossible [to move the ball forward]. Bremen showed us how two strikers can succeed against four or five opponents up front by simply moving.

And the left-back urged his teammates to take more pride in their performance despite the run of poor results.

“It’s time for us to pull our heads out of our behinds and show on the pitch that we are there. We must play football,” he said. “Of course, it’s a s—y situation but nobody has to be afraid to play football. That’s our job.

“Bremen showed us how it’s done. They wanted to play football even when things got tough for them. They wanted to move the ball from the back, their players made the runs to be open. They helped each other out — and this is what we have to understand: that this is the only way.”

Dortmund were in a similar poor run during the 2014-15 campaign under Jurgen Klopp, which yielded with the team being placed bottom of the table before the eventual turnaround of form. However, Schmelzer refused to draw any parallels to the time three years ago.

“This is why I am so vexed,” he said. “Three years ago, we often played well but were unlucky to lose games. Today was simply unacceptable.”

Paul Pogba and France both benefit from his return, and so will Manchester United
Man United boss Solskjaer must drop Pogba and De Gea to save his job
MLS nears tipping point with COVID-19 spikes. Could points per game end up impacting playoffs?
Ukraine vs. Spain – Football Match Report – October 13, 2020
Man United’s transfer window have fans expecting the worst