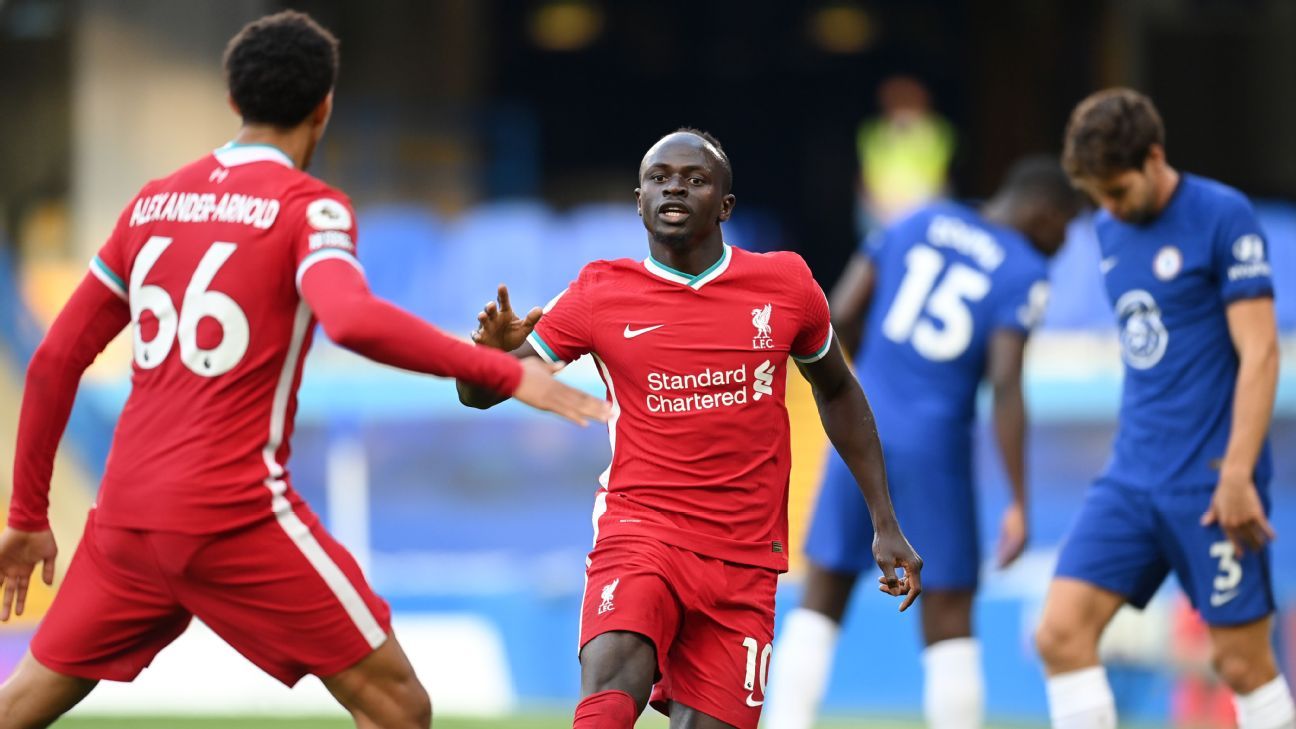 
Liverpool shrugged off last week’s rollercoaster win over Leeds at Anfield with a composed, dominant 2-0 win over Chelsea at Stamford Bridge. Sadio Mane and new signing Thiago were the driving forces for Jurgen Klopp’s side, who showed why they’ll be difficult to dethrone in the Premier League this season.

The Reds began the brighter of the two sides and enjoyed plenty of possession, playing like the home side in the opening exchanges. Yet the game didn’t really turn until just before half-time, when Andreas Christensen was sent off for denying Sadio Mane a goal-scoring opportunity.

Having had just one shot on goal in the first half, the man advantage proved decisive as Mane scored twice in nine minutes after the restart: the first was a fine glancing header beyond Kepa Arrizabalaga following superb approach play by Mohamed Salah and Roberto Firmino, while the second saw the Senegal international intercept Kepa’s pass in the box and calmly sidefoot into the empty net.

Chelsea had a chance to get back into the game with a quarter of an hour remaining, when Thiago fouled Timo Werner in the box, only for Alisson to make a sharp save from Jorginho’s spot-kick to keep the score at 2-0.

The win keeps Liverpool perfect to open the season and they’ll need this momentum heading to in-form Arsenal in the league next Sunday.

Almost everything. It felt like a “return to form” for a side that’s notably been a couple of gears below its best since clinching the 2019-20 Premier League title back in July. They were tighter, sharper and more assertive in defense after conceding three goals at home last week to Leeds United. Also looked slick in attack and will have been buoyed by the ease at which new signing Thiago slotted into the midfield after the break, giving them the incisive through-ball passer they’d been lacking.

Klopp could perhaps find fault with Liverpool’s profligacy around goal, with 12 of their 18 shots not on target at Stamford Bridge. Didn’t make too much of a difference in the end, but the Reds must continue to channel their dominance on the ball and ensure they don’t give opponents any hope of getting back into games after they take the lead.

Jurgen Klopp, 8 — Did little wrong with his selections, slotting Fabinho neatly into central defense in light of Joe Gomez‘ injury, and also getting immediate dividends to put Thiago into the lineup at half-time despite the ink barely drying on his contract with the club!

GK Alisson, 7 — Such was Liverpool’s dominance, and the lack of shots, that the Brazil international didn’t have a save to make in the first half. Yet he had to be sharp on a couple of occasions after the break, including an impressive stop to deny Jorginho‘s penalty in the 75th minute that could have made for a tricky final quarter-hour.

DF Fabinho, 7 — Is there a reason why he can’t play in the back four every week? Performed his role with aplomb, reading the game well alongside Van Dijk and proving just as tough to beat in one-on-one situations. One notable challenge to deny Timo Werner on the break, with the score 0-0 in the first half, showed his confidence and comfort level.

DF Virgil van Dijk, 7– Typically confident at the back, he did little wrong as per usual to keep things tight and prevent Chelsea‘s counter-attack via Werner.

DF Andy Robertson, 6 — Hustling and bustling effort down the left, but not as pinpoint with his crosses as he can be. Fortunate that Chelsea’s limitations didn’t force him into too much work on the defensive side of the ball.

MF Naby Keita, 6 — Worked tirelessly as is his remit in midfield before being withdrawn after the hour mark in favour of fresh legs.

MF Jordan Henderson, 6 — A commanding performance from the skipper, who not only dominated in the middle but displayed an excellent range of passing. He was unlucky to get hooked at the break when he was replaced by new boy Thiago Alcantara at the break, although it was precautionary given complaints of a tight thigh.

MF Georginio Wijnaldum, 6 — Few players in the Premier League can match the Dutchman’s work rate and effort on both sides of the ball. A quiet afternoon from an individual point of view, but did his job admirably from start to finish.

FW Mohamed Salah, 6 — Salah was involved early on, linking well and bringing others into play. Had one shot blocked and then a penalty shout waved away after he was seemingly upended by Mateo Kovacic. He linked well with Firmino again when Liverpool took the lead, playing a neat one-two with the Brazilian who then crossed for Mane. Industrious and busy in the front three.

FW Roberto Firmino, 7 — The Brazilian was unlucky not to put Liverpool ahead when his close-range effort was cleared off the line by Marcus Christensen. He then played a crucial role as Liverpool took the lead, crossing for Mane to put the visitors ahead.

FW Sadio Mane, 9 — The star man on the day, Mane’s constant presence around the attacking third paid dividends with two fine goals, one as a result of his great positioning and the other thanks to his persistence and positivity in pressuring Kepa to make a costly mistake. Took both goals well and came close to completing what would have been a well-deserved hat trick.

MF Thiago, 8 — Made a surprising debut for the Reds at half-time of what was a 0-0 game at Stamford Bridge and was an immediate upgrade in midfield, keeping possession ticking over nicely and also creating plenty of chances with his passing range and vision. Was lucky that Alisson denied Jorginho’s penalty, which was awarded after Thiago tripped Werner in the box with 15 minutes left.

MF James Milner, 6 — Replaced Keita on 64 minutes and continued Liverpool’s aggressive press from midfield as required. Some sloppy touches prevented him from creating a couple of scoring chances.

FW Takumi Minamino, N/R — Came on too late to make an impact, replacing Firmino in the 86th minute.