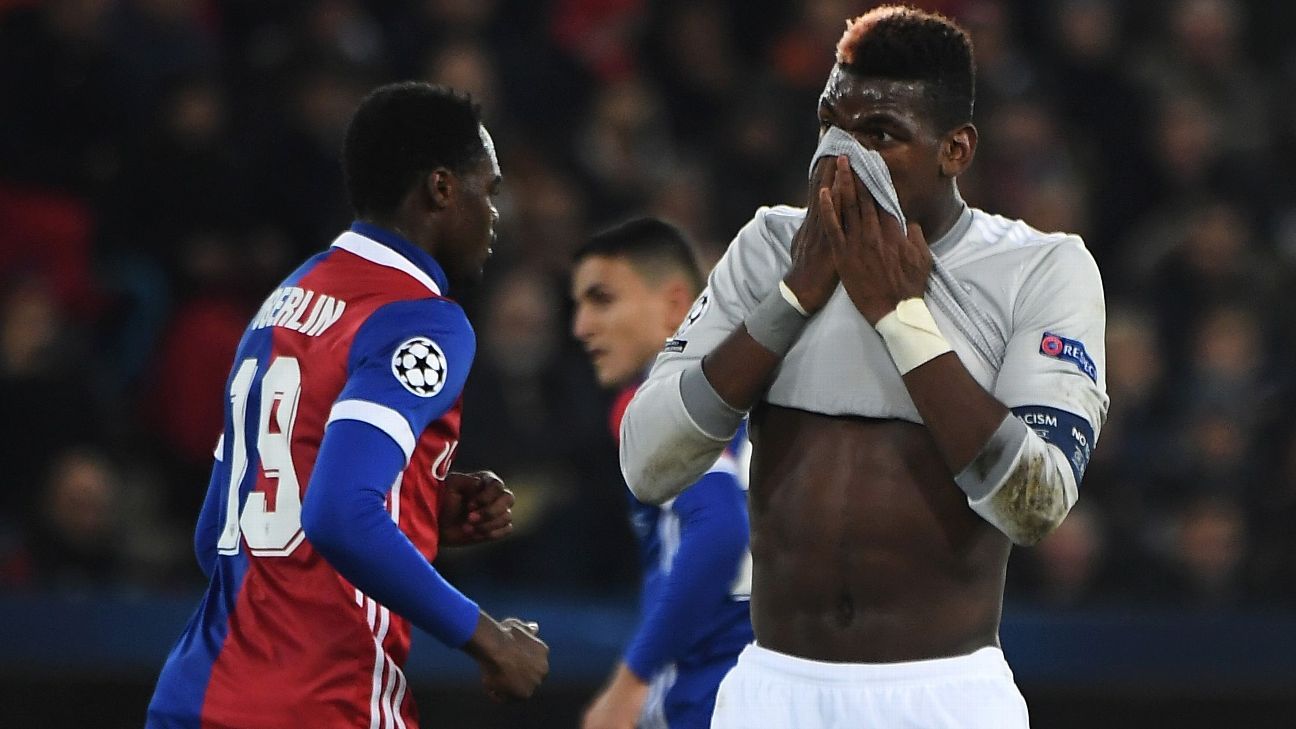 
It’s the morning after the night before in Basel and the last of the 1,500 Manchester United fans are making their way home, sore heads and all. The team had to rush back to Basel’s airport by the Rhine where France, Germany and Switzerland meet, to beat a midnight flight curfew. That meant no stopping to talk to journalists in the mixed zone.

They made the flight back to Manchester and were spared images of the joyous FC Basel team celebrating on the front pages of Thursday’s Swiss newspapers.

For the second time in as many games at home, Basel have beaten United, one of the giants of football. The team seven points off the top of the Swiss league, which had managed to score in all 14 previous home games against English clubs but who’d won just one of their previous seven Champions League home games, might even reach the knockout stage of the Champions League.

United will too, though you wonder what will happen when this Jose Mourinho side comes up against a top class opponent. The United fans will be there as ever, draping their red, white and black tricolours over whichever away end, but there are mixed feelings about the team they support. Nobody expects United to be lifting a fourth European Cup in Kiev in May.

United have a couple of world-class players. The best is Paul Pogba, but Real Madrid have four or five Pogba-class players. That’s why they’ve been the best team in the world for most of the last four years. United have two — the other is goalkeeper David De Gea, who Madrid will keep trying to sign.

United without Pogba is like coffee without caffeine, Morrissey without Marr; Ron Atkinson’s United without Bryan Robson; Liverpool without Steven Gerrard a decade ago. Good, but seldom great.

United have a lot of 7/10 players at the highest level; decent, sound professionals. Nice lads, too. But obsessed winners like in previous years, characters so driven that they’d fall out with each other for weeks because of a positioning error in games and then spend weeks trying to make up for it? That remains to be seen.

The mood is always flatter after a defeat — and an 89th minute defeat at that. That doesn’t happen often to Mourinho’s sides, which play to the last. But it happened in Switzerland’s second biggest city, after Mourinho made seven changes from Saturday’s 4-1 win over Newcastle.

The mood isn’t helped by Manchester City’s excellence either and while it’s easy to cherry-pick past United teams, plenty of games under Sir Alex Ferguson were dire, including the last visit to Basel in 2011 which saw the team lose 2-1 and get eliminated from the Champions League.

That was when Roy Keane made comments on television which annoyed Ferguson, who wasn’t the only one to feel Keane’s ire on that trip. A few hours before the match, former player Andy Cole was surprised to hear his former captain complaining that he’d not been invited to a concert with Cole and Gary Pallister the night before.

“Coldplay,” said Keane. “You all went to see Coldplay.”

A singer called Cole Page had been on United’s executive trip with Cole and Pallister and Keane had got his wires utterly crossed.

United had done well in Europe this season, winning all four matches so far. The first half was fine in Basel too, with the away side dominant and creating chances. Mourinho thought United could have been 5-0 up, but teams have to take their chances in football’s top competition and Romelu Lukaku el at didn’t take theirs.

That first half domination meant nothing when a far less impressive United looked ragged against a young, inexperienced team in the second half, especially after Pogba went off.

Much depends on how Mourinho deals with this unexpected defeat. Former United coach Brian Kidd, now at Manchester City, used to approach players on the team coach after matches when they’d played poorly and tell them that he’d had plenty of bad games and that George Best used to have them too — but people didn’t talk about them.

“What matters is how you come back from them,” Kidd would say. “Don’t let it get you down too much, that’s what Sir Matt would tell us.”

There’s no reason why United can’t bounce back against Brighton on Saturday. Their injury situation is better than it has been all season and nobody would be surprised to see the team hit four again, especially if Pogba plays. Without him, United are significantly weaker.

There are positives. Marcus Rashford, if he keeps his feet on the ground, could become top class. Anthony Martial — if he applies himself fully — too. There are solid team players: Nemanja Matic, Antonio Valencia (and how he is missed when he doesn’t play); Lukaku will (from past form) always get goals; Zlatan Ibrahimovic continues to make an impact; Marouane Fellaini will perform a role. Phil Jones is a good defender when fit and Marcos Rojo can be satisfied with his comeback in a virtually new defence where left-back remains the side’s biggest problem position. Sergio Romero is an excellent No.2. Portuguese goalkeeper Joel Pereira, who was on the bench in Basel, is too good to be a No.3. De Gea didn’t look impressed at not featuring on Wednesday evening.

A top four finish in the Premier League seems comfortably within their grasp. That is the priority, that is progress. Cups have been won too. The wretched away record in Europe that blighted Louis van Gaal’s spell has been fixed, but this team is still lacking great moments and great matches, that’s why Newcastle at home was so enjoyable last Saturday. The game was helped by the Geordies’ attacking mentality, spurring United into attacking and coming from behind.

But was the Basel fan in the main stand who, half way through the second half, shouted: “Come on Man United, play some football!” that misguided?