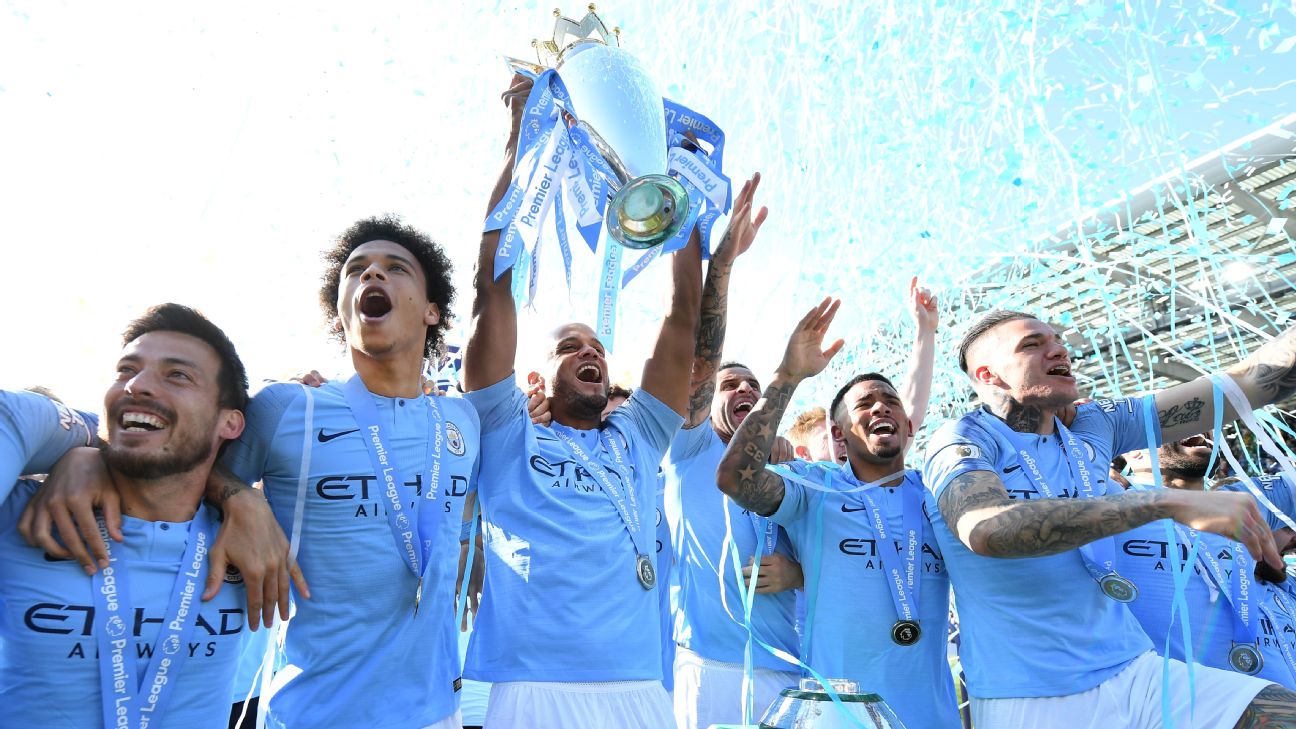 
Had Manchester City blown it? Glenn Murray had just headed Brighton into the lead in the 27th minute, and anyone seeking final-day drama had their hook. City had cracked at the worst possible moment; they had lost their nerve just as the hard work seemed to have been done; they had made a season’s excellence count for nothing and Pep Guardiola would face familiar accusations of overcomplicating at a moment that demanded clarity.

Those would have been the headlines, the think pieces, the pub discussions if that sole piece of slack defending from a corner had helped send the Premier League trophy to Anfield. But this City team is special. They had not fallen behind in a top-flight game since January and perhaps that was exactly what they needed here, on a sunny south coast afternoon against carefree opponents, the widespread assumption being that they would cruise home by doing what they usually do.

The close-range header from Murray jolted the reigning champions. Somewhere, perhaps in their deepest subconsciouses, had they persuaded themselves that the final chapter of this story could simply write itself? Maybe no amount of meticulous preparation, of cajolement from the tireless Guardiola, could completely mitigate for human nature. In hindsight, you wonder how anyone could have seriously doubted that they would respond. Straight forward they went from the restart, Aymeric Laporte‘s pass finding David Silva, whose sublime one-touch flick around the corner, freed Sergio Aguero to apply the inevitable. The job had yet to be completed but in the spell of 83 seconds, it was as if a year’s worth of pressure had bottlenecked before dissipating as quickly as it had arrived.

“It was the hardest and most satisfying Premier League ever,” said captain Vincent Kompany, speaking after extricating himself from the delirious bundle into which City’s players threw themselves at full-time. “It was the toughest title I have won in my career so far,” said his manager. Eventually their 4-1 win had seemed easy, as so much does for this team, but they are the first to stress that nothing ever has been like that.

It was one thing winning the 2017-18 title by a street; it was quite another to be pushed within a point of failure by an outstanding Liverpool side and, if last season’s title was hallmarked by the extravagant genius of their football, it was a less tangible quality that hauled them over the line this time. Guts. That is what City showed in abundance during the 14-game winning run that eventually saw them over the line. They had recorded five 1-0 wins in their previous 10 top-flight matches before this afternoon; it doubled the number of victories by that scoreline in their 103 league fixtures prior to that. “Mixing artistry and industry,” the City PA announcer bellowed towards the away end during a rapid-fire summary of their success. It was a sound assessment. They may have fallen short in Europe by the finest of margins but, domestically, it is hard to think of a facet they have yet to show.

As usual, though, Guardiola did it his way. Riyad Mahrez had not played a minute of football since City’s Champions League semi-final, first-leg defeat at Tottenham four and a half weeks ago. How typical, then, that he would make a selection that bordered on the perverse: bringing the Algerian in while Leroy Sane and a fit-again Kevin De Bruyne began on the bench. As City toiled through that opening quarter on an hour, with Mahrez looking uncomfortable in his starting position on the left and Raheem Sterling finding little joy behind Aguero, the suspicion was that Guardiola’s tweak had backfired and minds flicked, too, to the last-minute penalty Mahrez had ballooned at Liverpool in October.

But in the 63rd minute it was Mahrez, deceiving Lewis Dunk with a delicious feint, who drilled their third goal high past Maty Ryan to effectively put the outcome beyond doubt. The goal was eerily similar to a crucial winner Mahrez scored for Leicester at Watford three years ago, when the Foxes were closing in on their own title win. He was the man for the occasion here as well, standing tall and delivering when it mattered. From their squad players to their main men, City have made it an irresistible habit.

“It’s a combination of a great group of players, great staff and an incredible desire to overachieve,” Kompany said. The Belgian defender was replaced four minutes from time to a generous ovation from all sides of the ground. It had the feeling of a swan song although there is no indication, as yet, of his or the club’s plans for next season. Over the next couple of seasons City will face the challenge of replacing the old heads, all doubted at different points in Guardiola’s tenure, who have stood up like giants this term: Kompany, Aguero, the absent Fernandinho. The 2018-19 campaign became a stunning encapsulation of the winning mentality they have forged.

Once they were finally back in the dressing room, City’s players enjoyed the beers that had been laid on and launched into a raucous rendition of Oasis’ “Wonderwall” led by band member and die-hard City fan Noel Gallagher himself. Guardiola, meanwhile, was already smelling a repeat performance a year from now.

“It will be tough, but we will be stronger,” he said. “When you win two in a row, it is incredible. I have a feeling next season that we can come back and be who we are right now.”

They were looking down the barrel but, faced with the unthinkable, this City team’s identity became clearer than ever.