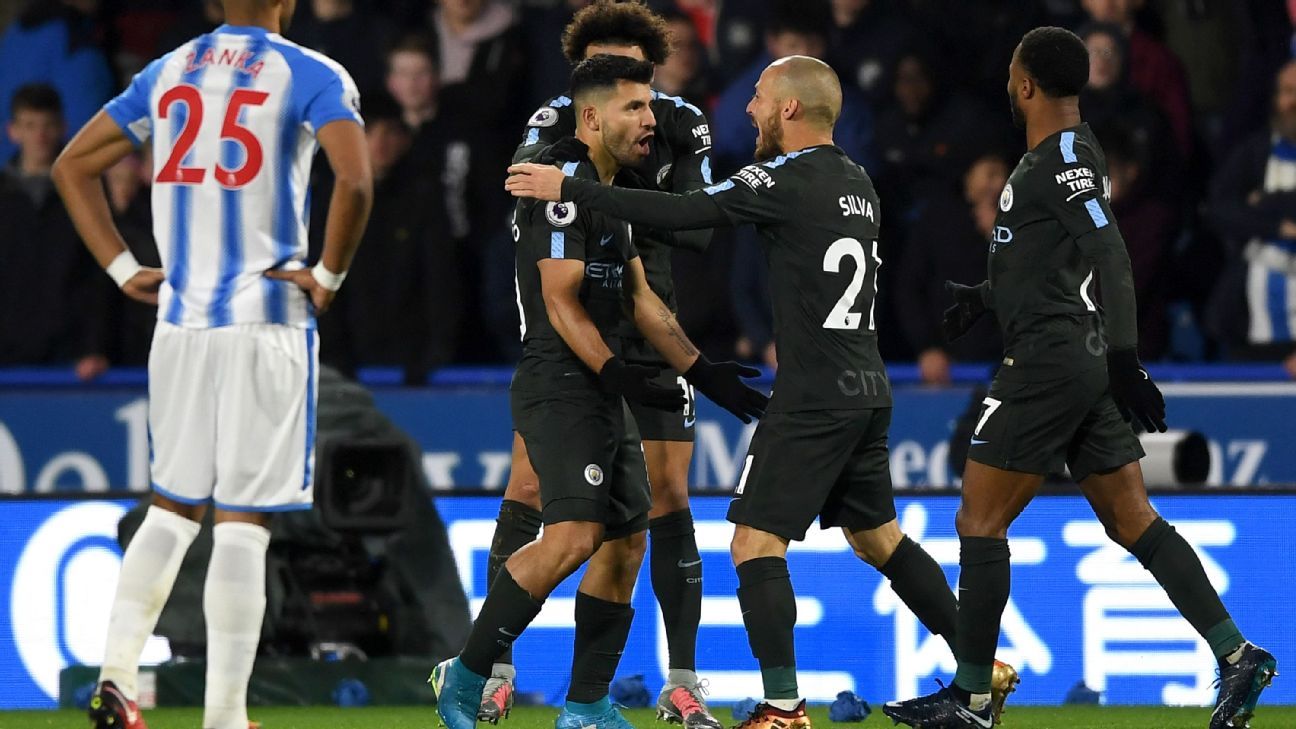 
Nobody really expected Huddersfield Town to stop Manchester City’s eternal run of victories, but you could almost hear the sighs of disappointment around the country when Raheem Sterling finally broke the Terriers’ brave resistance.

That’s 11 victories in a row for Pep Guardiola’s side, a daunting record indeed. For those of us who like a close title race, it’s all a bit of a shame. Manchester United have an incredible home record; Arsenal are demonstrating reserves of fortitude that we never knew they possessed; Chelsea are still knocking around somewhere. But no-one seems able to get close to City, who are still eight points clear of second.

Comeback of the weekend

Roy Hodgson’s Crystal Palace certainly can’t be accused of throwing in the towel. They struck deep into injury time to salvage a draw against West Ham last month and they did it again to beat Stoke 2-1 on Saturday. After their unfortunate draw against Everton last week, and a spirited effort in defeat against Spurs before the international break, that’s four decent performances on the spin from Palace. They’re still bottom, they still have the worst goal difference in the league, but don’t be deceived: With a welcoming run of fixtures, they could be close to hauling themselves out of this.

Has any club in Premier League history ever gone from such buoyant positivity to such profound misery as quickly as Everton? You cannot concede the sort of goals they shipped in the 4-1 defeat to Southampton and expect to stay in the Premier League. Rudderless and hopeless, they’re drifting towards the Championship and need to wake up and get a grip before it’s too late. It’s been over a month since they sacked Ronald Koeman and they’re still yet to decide on a replacement. Ideally, you’re supposed to identify the replacement before you sack the incumbent …

Tender finish of the weekend

Has a ball ever crossed the line with more tenderness than Salomon Rondon’s finish for West Brom in the 1-1 draw against Spurs on Saturday at Wembley? Having outmuscled Davinson Sanchez, the Venezuela striker simply stroked the ball past Hugo Lloris. It was so delicate, it was nearly sensual. It was less of a strike and more of a Crazy Golf shot, straight through the windmill’s sails and into the hole. More of this sort of thing, please.

Jose Mourinho used to be the master of the press room, skilfully leading journalists precisely where he wanted them with tasty sound bites and purposefully distracting tangents. It was deft and subtle. But is his heart still in it? “I wouldn’t be surprised if today some of the pundits say we play with too many attackers,” the Manchester United manager announced after a drab 1-0 win over Brighton. “I wouldn’t be surprised. But if they say that, I think they would be right.” Hmm … I think he’s trying to tell us something. Do you think he wants us to say that he played too many attackers?

I’d leave him alone for a bit …

Pity the first journalist who had to approach Sean Dyche on Sunday. When Burnley met Arsenal in October 2016, Arsenal won courtesy of a controversial last minute Laurent Koscielny goal. When Burnley met Arsenal in January 2017, Arsenal won courtesy of an injury time Alexis Sanchez penalty. So you’ll never guess what happened this weekend. Yep. Arsenal won 1-0 courtesy of an injury time Sanchez penalty. If Dyche goes on to manage for another 20 years, he’ll never relax against Arsenal until the final whistle is blown, the lights are off and everyone’s gone home.

Of course he meant it. The look of delight, the same look an eight-year-old wears when they discover a shiny new bike under the Christmas tree, on Willian’s face that was attributed to surprise, was simply pride at a job well done. You see, Willian had sensed that Simon Mignolet had drifted off his line, he didn’t even need to look up to ascertain the Belgian’s position, he just felt the suspect vibration through the invisible strands that bind us together in the universe. That’s his story and he’s sticking to it.

Contrast of the weekend

Hats off to Watford this weekend, not just for their fine 3-0 victory at St James’s Park, but for paying out £2,000 for a fleet of taxis to get approximately 50 stranded supporters to the game on time. The fans were stuck at a service station when their coach broke down, but the club leapt to the rescue, which is lovely because if you’re going to miss a game, you want it to be a stinker, not a memorable 3-0 thrashing.

Perhaps this is something for Chelsea to consider, given that so many of their fans were stuck at Liverpool South Parkway Station on Saturday when a chartered train left without them. They got home on a replacement bus at 6 a.m. the next morning.

Disconcerting slide of the weekend

It’s bad enough that Newcastle have lost four games on the bounce, but the fact that three of those defeats have been in games you would expect the Magpies to at least secure a draw in makes this all the more worrying. Watford are no mugs, they’ve spent the season proving the preseason doubters wrong (again, sorry), but they had this game in the bag after an hour. You’re not supposed to be able to do that at St James’s Park. Newcastle need something to change the mood. They need to conclude this takeover as quickly as possible.

One to watch next weekend

Just how good are Watford? Much better than we thought, certainly. But are they good enough to make a sustained challenge for the Europa League places. Or maybe even more? On Tuesday they’ll take on Manchester United and on Saturday they’ll play Tottenham, with both games at Vicarage Road. If they can pick up more than two points from that omnibus, we may have to start taking Marco Silva’s men very seriously.