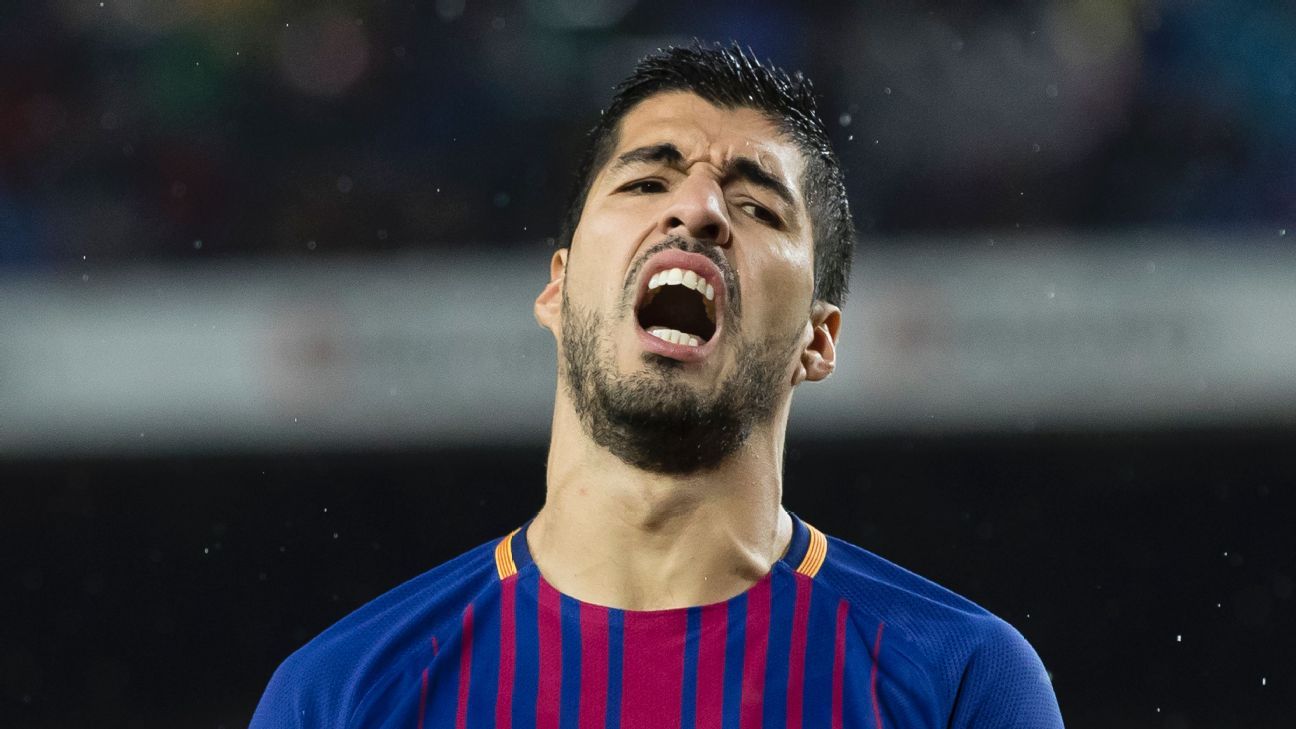 
One day, not long after he had signed for Barcelona, Luis Suarez got a call from Liverpool. On the other end of the phone was Mario Balotelli, who had a favour to ask.

Things weren’t going well for him at Anfield but he thought that there may just be a way of turning them around. He’d found an old pair of Suarez’s shin pads at the club’s Melwood training ground; they were personalised, with pictures and number printed on them, and Suarez had won the Golden Shoe wearing them. Balotelli could do with a bit of that rubbing off on him — quite literally — so he rang and asked if he could have them. Suarez said yes.

Right now, he might be tempted to call Balotelli and ask for them back. In an interview with Suarez carried out by the Catalan papers El Mundo Deportivo and Sport this week, the opening question was the question everyone is asking; it is also, Suarez admitted, one that he has been asking himself.

What’s happening to you?

The Uruguay international, his country’s all-time top scorer, twice European top scorer with two different clubs and top scorer in three different countries, the only player to break up Lionel Messi and Cristiano Ronaldo’s eight-year stranglehold on the Pichichi award and the only striker other than them to ever reach forty La Liga goals, hasn’t scored for 459 minutes.

“I’ve been asking why the ball doesn’t want to go in,” Suarez said. He also admitted that he had reached the point where somehow, deep down, he knew it wouldn’t. There was a chance against Malaga where he says he was laughing as he took a shot that he knew wouldn’t go in when once-upon-a-time it might: the futility of it all proved funny. Funny strange and funny “ha ha.” That’s why he could be seen passing when once he would have shot. And even if it is Messi you’re passing to, that’s rarely a good sign for a striker. Nor, though, is it a new one or a permanent one. Suarez admits the same happened at Liverpool too. And maybe that’s the thing.

Of course, he’s not laughing most of the time. The frustration grows; some fury, too. You think you can see it in his eyes, his body language. Maybe you even start to wonder if one of those moments is coming but no, it’s not. Messi’s presence and shared responsibility ensure it and reinforce the idea that Suarez is not costing teammates, nor is he culpable for a collapse or a damaging defeat, which is why continued victories matter. It is not just words when Suarez says “I don’t go home angry when I haven’t scored; I feel bad when I haven’t helped the team.” It feels worse when you don’t help but actually harm the team. When, even if it’s irrational, it feels like they’re losing because of you.

“It’s not anxiety,” Suarez insists. “If I was anxious, I would get the ball near the half-way line and try to go round three, four or five players and I would be shooting all the time.” Passing the ball while you wait for the phase to pass makes more sense, even if it is a symptom of something wrong.

The question is when will that phase pass? And is there any way of accelerating its arrival, of identifying the problems and resolving them? The questions recur: when the next goal is coming, and why is it taking so long?

There are reasons that, on the face of it, help to explain Suarez’s drought, tangible variables to add into the equation. The striker has a meniscus injury in his knee and having chosen to avoid surgery because that would mean a longer recovery time, he’s struggled for fitness as a result. At times he has looked sluggish, even a little heavy: not in the best shape for scoring goals.

The mechanics of the team have changed too and significantly so. Suarez no longer has Messi to his right (or behind) and Neymar to his left. Ousmane Dembele, who provided the pass for him to score against Juventus, suffered a significant injury during his first league start.

“If you have a winger to the left or right, you tend to play a bit more static and in short spaces between the two centre-backs,” Suarez says. “But when you don’t have a left wing, you drop in there more.” Further from goal, in other words, and the stats show that he is indeed further from goal. He also admits to falling into the trap, laid by force of habit, of looking for Messi (now in an even more central role) even when his teammate is marked. Yet that distance is not everything, nor is it definitive; nor is the deference, either. Suarez is getting chances too, but not always taking them.

Suarez is a more tactically minded player than is often assumed and there is an awareness about how the pieces fit together and how it all works (or doesn’t) that might help, while the international break comes as an opportunity to reduce the load, deal with his injury and give it a little time. “Let’s see if this break can help me and I can get fully sorted with the knee,” he says.

Fitness is fundamental but the doubts don’t end there. Nor do the explanations. It may be legitimate to wonder whether Suarez, whose 31st birthday is in January, is entering into a different and difficult phase of his career. Last season, too, he missed opportunities and unlike so far this season, some of them were genuinely costly. You could pick out three or four key errors that might have changed the destiny of the league title.

The thing is, if that adds weight to the idea that this may be a deeper problem, perhaps even a decline, missed chances were not new last season either. And there is something about his shape and the way he runs, chest ahead of his feet, body inclined, that can make his bad moments look really bad. Worse, probably, than they actually are. Suarez never saw himself as an aesthete; he talked about not being able to do what Neymar and Messi did, about getting out their way. Often, he appeared to bundle through and score; when he doesn’t score, he appears just to bundle. And he won’t always score.

He hasn’t always scored. When Suarez first broke into the Nacional team, aged 18, he couldn’t find the net for love nor money. He recalls the whistles and the insults from the stands: “peg leg” and “donkey” were among the nicer things they called him. There’s a game against Atletico River Plate that sticks in his mind: by his calculations, Nacional had 13 chances and he missed nine of them. There are still fans in Montevideo, he says, who come up to him and admit: “I thought you were never going to score goals.”

He did from there, of course. Lots and lots of them. But that didn’t mean there weren’t other runs when it looked like he might never do so again. This is Suarez’s worst run since he joined Barcelona but as he joked, “at least there are a few of us” — he has only three league goals but it’s still more than Antoine Griezmann, Ronaldo or Karim Benzema — and it’s not an entirely new experience. Which may be one of the reasons why even if it doesn’t always look like it, he’s calmer this time; it’s why he could laugh against Malaga. He knows it’s not eternal, however much it feels like it.

As Suarez says in his autobiography: “Then, almost by chance a bad run can suddenly end. I’ve come to realise that the best thing to do is not to look for it, that the bad run will end naturally.”

Not that it’s easy to do, or that the frustration doesn’t boil inside. But the run does end eventually. For Suarez, it has so far, at least. And what goes for him probably goes for pretty much all of them. “When one goes in, lots more will,” he said this week.

When Suarez first signed for Barcelona, it took him a month to score — it came against APOEL in the Champions League — and eight league games to get a goal. Some close to him back then thought that nevermind too angry, he wasn’t angry enough; in a potential parallel to this campaign, things didn’t really click until Messi suggested he move inside while Messi went right. By the end of the season, he had 25 goals and a treble, scoring in Manchester, Paris and Berlin. The season after, he got 59; last season it was 37.

At Liverpool, where he got 61 goals in his last two seasons, there were bad spells too. Usually, Norwich came to his rescue — poor John Ruddy suggested that he stay away next time — but they were there. And then, one day, they weren’t. One run ended with a shot that he admits wasn’t even hit right; two more followed immediately. Something shifted and he started scoring. Luck was on his side; fate had favoured him. He’d tried to tempt it when the ball was not going in and he couldn’t understand why. “You change boots, you change your routine, you train differently, you go out onto the pitch in a different order…”

Maybe you find an old pair of shin pads belonging to someone else and you put them on. Maybe you call and ask if you can keep them. Maybe, like wearing Dead Shot Keene’s boots, it works. Or maybe it doesn’t: Balotelli only scored one league goal all season with Suarez’s pads. That has nothing to do with it, of course. Everyone “knows” that. But here’s the thing: maybe none of it does, or maybe all of it does, in some small way.

One day, the ball goes in again. And you still can’t put your finger on why.

Could Van Dijk’s injury end Liverpool’s Premier League title hopes? History is not on their side
Manchester United’s Harry Maguire brushes off talk of club crisis
Lionel Messi made his Barcelona debut 16 years ago today. A lot has happened since then
Everton are top of the Premier League and primed to end decade of derby futility vs. Liverpool
Man United’s transfer window have fans expecting the worst