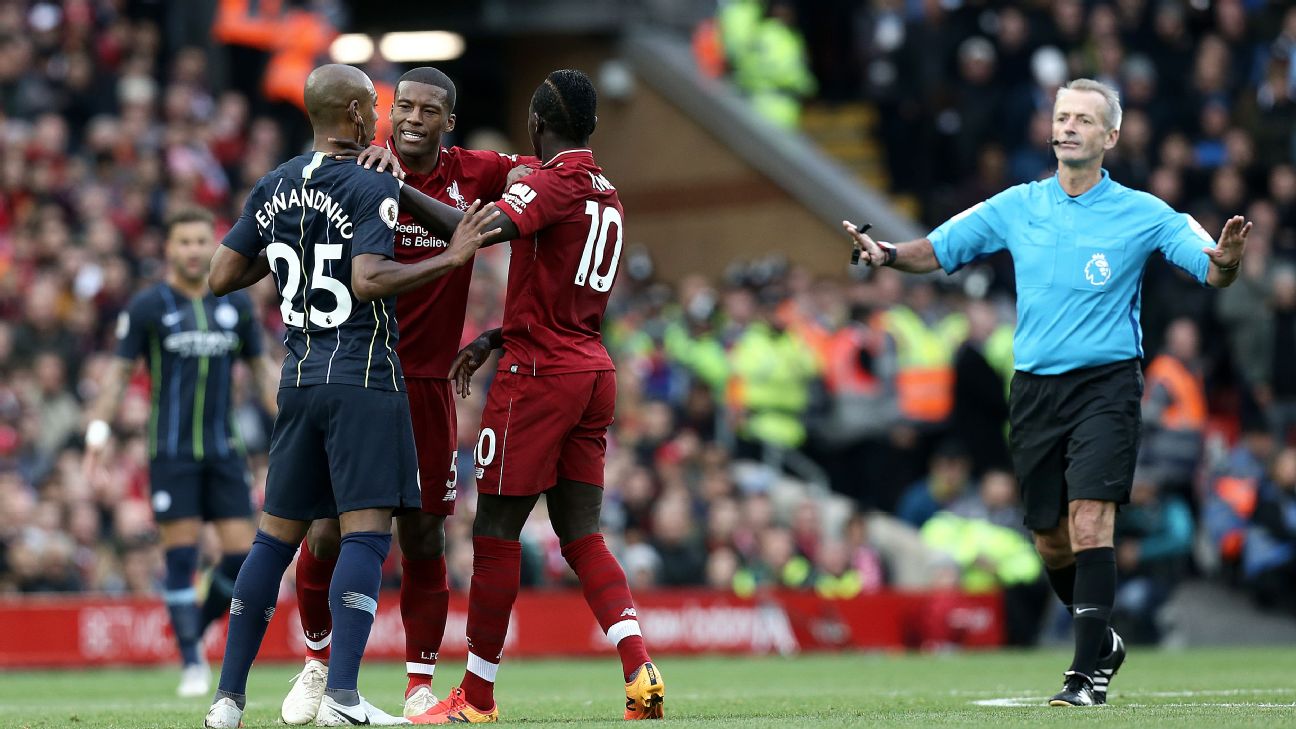 
Liverpool vs. Manchester City has become the biggest game in English football. The two clubs have pulled away from the pack to battle it out for the major honours and Sunday’s clash at Anfield promises to have a huge impact on the Premier League title race. Jurgen Klopp’s Liverpool, champions of Europe, go into the game with a six point lead over City at the top of the table, having made an unbeaten start to the 2019-20 season. Only Manchester United have been able to take points off Liverpool so far this term, drawing 1-1 at Old Trafford last month.

Man City, who completed a domestic treble of the Premier League, FA Cup and Carabao Cup last season, have made a shaky start to this campaign, surprisingly losing to Norwich and Wolves, but they travel to Anfield knowing that a win will move them to within three points of Liverpool and potentially inflict a major psychological blow on Klopp’s men. However, a defeat could set Liverpool on their way to a first top flight title since 1990.

So where will the game be won and lost? And what are the key issues, not only for the 90 minutes, but the title race as a whole?

JUMP TO: Who needs the points the most? | The Anfield factor | How can Man City stop Liverpool? | Where are Man City vulnerable? | The key battle | The 95 minute man | Who wins?

THE RACE SO FAR

Liverpool have raced clear after winning 10 of their 11 games, scoring 25 goals and conceding nine. City, meanwhile, have won eight, drawn one and lost two of their 11 games, but their firepower has seen them hit 34 goals, with 10 conceded at the other end. Within that run, City recorded their biggest-ever top division victory with an 8-0 defeat of Watford at the Etihad.

Injuries have hit City harder than Liverpool, who won every game in the absence of first-choice goalkeeper Alisson Becker during the Brazilian’s two-month spell on the sidelines with a calf injury. By contrast, at the Etihad, the long-term loss of centre-half Aymeric Laporte with a knee ligament injury has been compounded by defender John Stones also missing a large chunk of the season so far. He’s back now, which is good news for Pep Guardiola’s defensive options, but City’s No. 1 keeper, Ederson, is a serious doubt for the clash after coming off with a thigh injury at half-time during the team’s 1-1 draw with Atalanta in the Champions League this week, leaving backup Claudio Bravo (and hopefully not Kyle Walker) to slot in.

But the story of the title race has been Liverpool’s ability to score crucial goals in the dying stages of games. Without late winners against Leicester and Aston Villa, and a point-saving goal by Adam Lallana at Manchester United, it would be a different story. Indeed, what the Reds have demonstrated this season is that they’ve learned how to win even when they’re trailing, even when they’re not playing at their peak. But it’s their newfound mettle that impresses most: 10 of their 31 points this season have been won after going behind, including seven in their last three games (against Man United, Spurs and Villa). You can’t count out Klopp’s men until the final whistle blows.

WHO NEEDS THE POINTS MOST?

The obvious answer is that both teams need the win, for different reasons, but the reality is that City simply cannot lose. The prospect of falling nine points behind Liverpool would feel like a decisive blow in their attempt to win a third successive title.

Bigger leads than nine points have been overturned in the Premier League, but Liverpool are looking so formidable this season that it would take a major collapse for them to concede such a healthy advantage. It’s hyperbole to say this match could decide the title, but it’s about as big as it comes for a clash in the first half of the season. City simply can’t afford to lose, but a win to close the gap to three points would shatter Liverpool’s aura of invincibility and jump-start the title race.

No team exploits home advantage quite like Liverpool. Just ask Barcelona about the power of Anfield following their 4-0 destruction in last season’s Champions League semifinal second-leg. Liverpool have gone 45 games without a Premier League defeat at Anfield, a run which stretches back to a 2-1 loss against Crystal Palace in April 2017.

City came close to ending that streak 13 months ago, only for Riyad Mahrez to miss a late penalty during last season’s 0-0 draw, but Anfield is unquestionably a major element of Liverpool’s armoury in the title race. The home crowd motivates their team like few others and Klopp and his players have tapped into their relationship with the supporters to make Anfield a unique environment in the Premier League.

And just to hammer home the difficulty of winning at Liverpool, City have a miserable record at Anfield. They have not won there since May 2003 and have been beaten on 15 of their 22 Premier League visits to the stadium. They also lost a Champions League quarterfinal at Liverpool in 2018.

HOW CAN CITY STOP LIVERPOOL?

Despite appearing so formidable, there are weaknesses in Liverpool’s team. The only problem for Man City is that very few opponents have been able to take advantage of them.

City possess the players to do that, though, and Guardiola will have noted how Manchester United nullified Liverpool’s full-backs, Andy Robertson and Trent Alexander-Arnold, during last month’s draw at Old Trafford. United manager Ole Gunnar Solskjaer deployed the pace of Marcus Rashford and Daniel James on the flanks to force Alexander-Arnold and Robertson into more defensive duties than they usually have to take on, and the tactic worked because it prevented the pair from breaking forward and delivering the crosses that have become a huge part of Liverpool’s attacking gameplan.

If City can do the same and keep the two full-backs in their own half of the pitch, it will go a long way to cutting off the supply line to Liverpool’s forwards. The loss of Leroy Sane to a long-term knee injury is a blow for City as this game would have been perfect for the German winger, but Raheem Sterling and Mahrez can do the same job.

WHERE ARE MAN CITY VULNERABLE?

Guardiola was desperate for a new centre-half this summer following the departure of former captain Vincent Kompany to Anderlecht, but with City restricted to targeting British defenders due to a full quota of foreign players in their squad, the club were unable to find the right man. That failure has left City short of quality and depth at centre-half following the loss of Laporte to injury.

The unconvincing Nicolas Otamendi has been City’s only fit senior centre-half at times this season, with Guardiola having to deploy midfielders Fernandinho and Rodri alongside the Argentine, and the team has looked vulnerable as a result. Opponents such as Norwich have successfully targeted City’s lack of height and the uncertainty at the back this season; Liverpool will do the same.

The return to fitness of Stones will help, but Guardiola has not thrust him straight back into the team, which hints at his concern over the England defender’s concentration levels. But even if Stones and Otamendi line-up together on Sunday, it will be an area of weakness for Liverpool to target.

Both teams have an array of attacking talent, but what happens on Sunday is more likely to be about who wins the midfield battle between Liverpool’s Fabinho and City’s Fernandinho rather than whether Sadio Mane, Mohamed Salah or Sergio Aguero score a spectacular goal for their side.

After a slow start at Anfield following his arrival from Monaco in the summer of 2018, Fabinho has become a key cog in Klopp’s team. He controls the tempo of the game for Liverpool, provides a shield for the back four and allows his midfield partners to push forward and support the attackers in advanced positions. His value to Liverpool was underlined against Aston Villa last week when Klopp left him on the substitutes’ bench to ensure he did not pick up a yellow card that would have ruled him out of the City game.

But while Fabinho is important to Liverpool, he has yet to provide the long-term consistency and mastery of his position that Fernandinho has achieved at City. The 34-year-old remains the conductor of Guardiola’s team, despite the summer arrival of Rodri from Atletico Madrid. He is also the master of the tactical foul, which enables the game to be broken up, preventing opponents from breaking quickly.

If Fernandinho ends up in City’s defence again this weekend, it will be a major bonus for Liverpool because City aren’t the same when he isn’t in midfield.

If you want to watch two players in this game, make it Mane and Salah.

No player has made a bigger impact on this season than Liverpool forward Mane. He is the man City have to stop. The Senegal forward has scored six league goals, one more than Salah, but he has also won two crucial penalties, against Leicester and Tottenham, because of his sheer persistence and determination. You can bet Guardiola is worried. Last weekend he accused Mane of diving, after the forward was booked in the first half against Aston Villa; Mane shot back, saying that he will probably be watched more carefully by Sunday’s referee because of Guardiola’s “clever” comments.

Salah continues to be viewed as Liverpool’s biggest attacking star, but he tends to operate in short bursts, often going quiet for long periods of the game before suddenly coming to life, in sharp contrast to Mane who is always alive, constantly chasing the ball and making runs into dangerous positions.

Salah and Mane are a perfect blend, but Mane is irrepressible at times and City will have to watch him from the first kick until the final seconds of stoppage time.

KLOPP vs. GUARDIOLA: The mind games

The two managers have taken a back seat as their two sides have slugged it out for the biggest honours over the past couple of seasons, but Guardiola’s suggestion last week that Liverpool have benefited from “diving” might just have sparked a new dimension in the relationship between the pair. Klopp bit back by claiming, prior to the Champions League clash with Genk, that he wasn’t “in the mood” to talk about City.

Has Guardiola decided to up the ante by engaging in so-called mind-games with Klopp, by focusing on the perceived negative elements of the Liverpool team?

Liverpool are the in-form team who have everything in their favour going into this game. They have the Anfield factor, they are unbeaten in the league this season and City travel to Merseyside without Laporte and also David Silva, who misses out through injury.

But City are a team of champions and the likes of Sterling, Aguero and Kevin De Bruyne would walk into any team in the world. City possess the tools to go to Anfield and win, yet history is not on their side. They certainly need the win more than Liverpool, and this will be a test of the home side’s title credentials.

However, with such attacking quality and strength of character, Liverpool should just edge it 2-1.