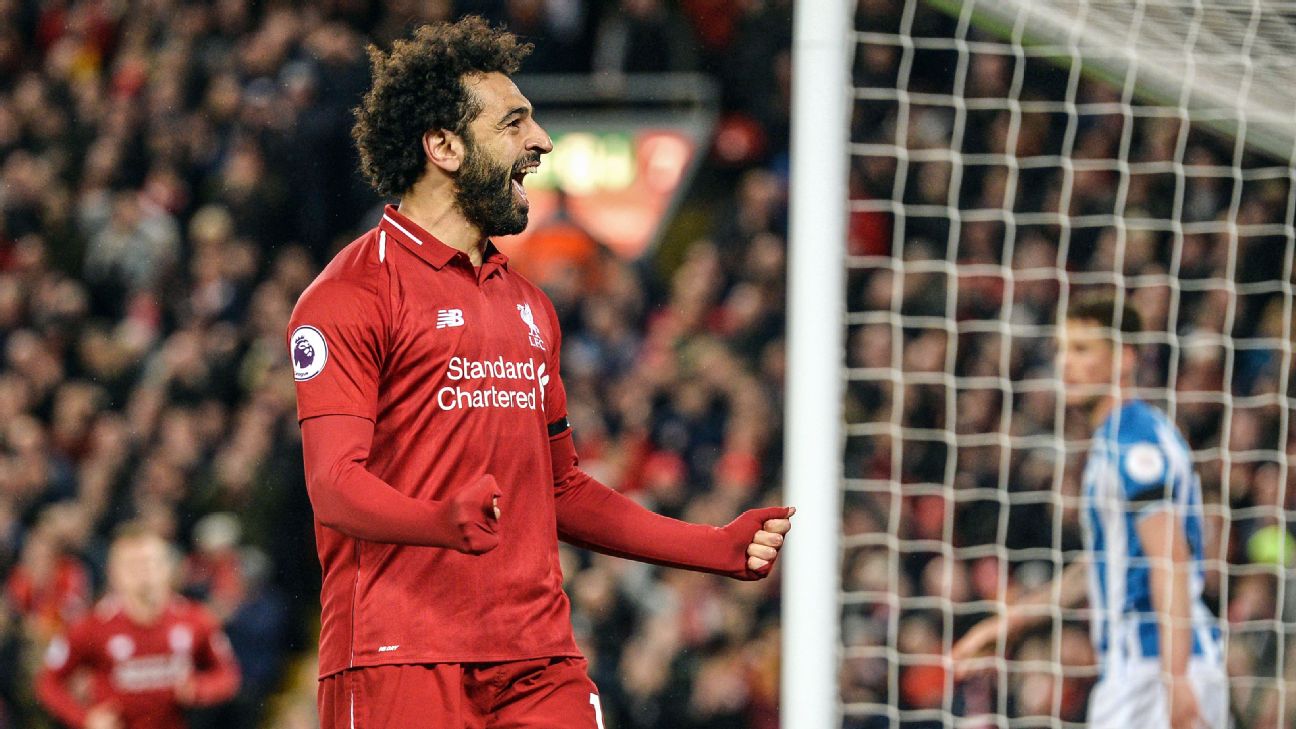 
The Premier League transfer window is open. You can click here to review all the latest transfers and keep up to date with all the latest gossip below.

Transfer window grades | When does the window open in Europe? | QUIZ: Which club should you join?

The Liverpool star was the joint Golden Boot winner in England along with teammate Sadio Mane and Arsenal’s Pierre-Emerick Aubameyang, and the outlet reports that manager Zinedine Zidane sees Salah as the perfect player to partner with Hazard and Karim Benzema in what would be an impressive attacking trio.

Gareth Bale looks certain to be headed out of Madrid this summer — along with a number of other high-profile names — and the Mail says, “Zidane believes Salah’s pace and movement would inject some real dynamism into his side …”

Of course, any move for the Egypt international will be met with stiff resistance from Jurgen Klopp and Liverpool, who are unlikely to want to sell, but perhaps an offer worthy of a new-era galactico could persuade the Premier League runners-up to let Salah go.

09:00 BST: Alvaro Morata has he wants to spend the rest of his career at Atletico Madrid, but added he might still have to return to his still parent club Chelsea sooner or later.

Spain international Morata, 26, joined Atletico in an 18 month loan deal in January 2019, however Chelsea may be able to recall him before that and his contract at Stamford Bridge runs until 2022.

“I don’t know, that is about contracts, I just care about going onto the pitch to play,” Morata said when asked about the situation at an event on Thursday in Madrid. “What is clear is I want to stay here at Atletico, and will do everything possible to keep playing here, for the rest of my career.”

The situation is complicated by Chelsea appealing a two window transfer ban imposed by FIFA, and their first choice centre-forward Gonzalo Higuain expected to return to Juventus when his loan spell ends next month.

08.30 BST: Benfica have increased their bid to sign Barcelona goalkeeper Jasper Cillessen to €15m, according to Portuguese outlet Record.

Barca reportedly turned down Benfica’s initial offer of €12m for the keeper. According to Record, Benfica executives will travel to Barcelona to have a meeting with their Barca counterparts to seal the deal. Cillessen, 30, has also been linked with Porto and Valencia.

The Netherlands international joined Barca from Ajax in 2016 as a replacement for Claudio Bravo but has primarily been used as a back-up to Marc-Andre ter Stegen. Cillessen has made two league appearances for Barca this season and is tied to the Catalan giants until June 2021.

08.00 BST: Portuguese side Sporting CP are preparing a bid for Club America’s Colombia international Mateus Uribe, a source has confirmed to ESPN.

The bid is expected to come early next week and is set to be around the $10 million mark for a player who has played 62 Liga MX games for Las Aguilas — currently semifinalists in the 2019 Clausura playoffs — and featured for Colombia at the last World Cup.

Uribe has already been linked with a move to Boca Juniors this summer, with a source saying that the Argentine giants had made a bid of $5 million plus an unnamed player, but that the initial offer was rejected by America.

Bayer Leverkusen striker Julian Brandt has attracted much attention from clubs such as Tottenham Hotspur and Liverpool, but the Champions League finalists might miss out on the young Germany star, who could stay in Bundesliga.

Brandt is believed to be available for a release clause of just £21.5 million, and Sky Sports reports that Borussia Dortmund might be the favourites to nab Brandt.

The report also suggests that he could stay at Leverkusen should they get a result against Borussia Monchengladbach in the season finale and thus shore up Champions League play.

The 36-year-old Brazilian stalwart prefers an offer from England, according to the Daily Mail, and if not, then a new two-year deal from PSG.  The Ligue 1 champions, however, are frustrated with the ex-Barcelona man and are willing to offer only a one-year extension.

Alves previously attracted interest from the likes of Chelsea, Manchester City and Manchester United before he signed with PSG in 2017. But there seems to be a long shot if any of the Big Six would come calling.

– Mundo Deportivo is reporting that Barcelona are keeping tabs on three Premier League attackers, despite their interest in Atletico Madrid’s Antoine Griezmann. The story says Barca could move for Manchester United’s Marcus Rashford or Arsenal’s Aubameyang or Alexandre Lacazette in case their reported move for the Atleti striker falls through.

– David Accam has been traded from Columbus Crew SC to 2020 expansion team Nashville SC for $450,000 in allocation money, according to a report on MLSSoccer.com. Accam, who was just traded to the Crew from Philadelphia Union one week ago, will officially join the team on Jan. 1, 2020, and become the fourth player on Nashville’s first MLS roster along with Derrick Jones, Cameron Lancaster and Daniel Rios.

Coronavirus: No timescale on Kante Chelsea return to training – sources
La Liga given green light to restart on June 8 by Spanish prime minister
How one text message began a downward spiral for a ‘billion-dollar’ footballer
Italy’s Chiellini admires Luis Suarez for World Cup 2014 bite: ‘Malice is part of football’
Bayern's Thiago to miss top game at Dortmund through injury