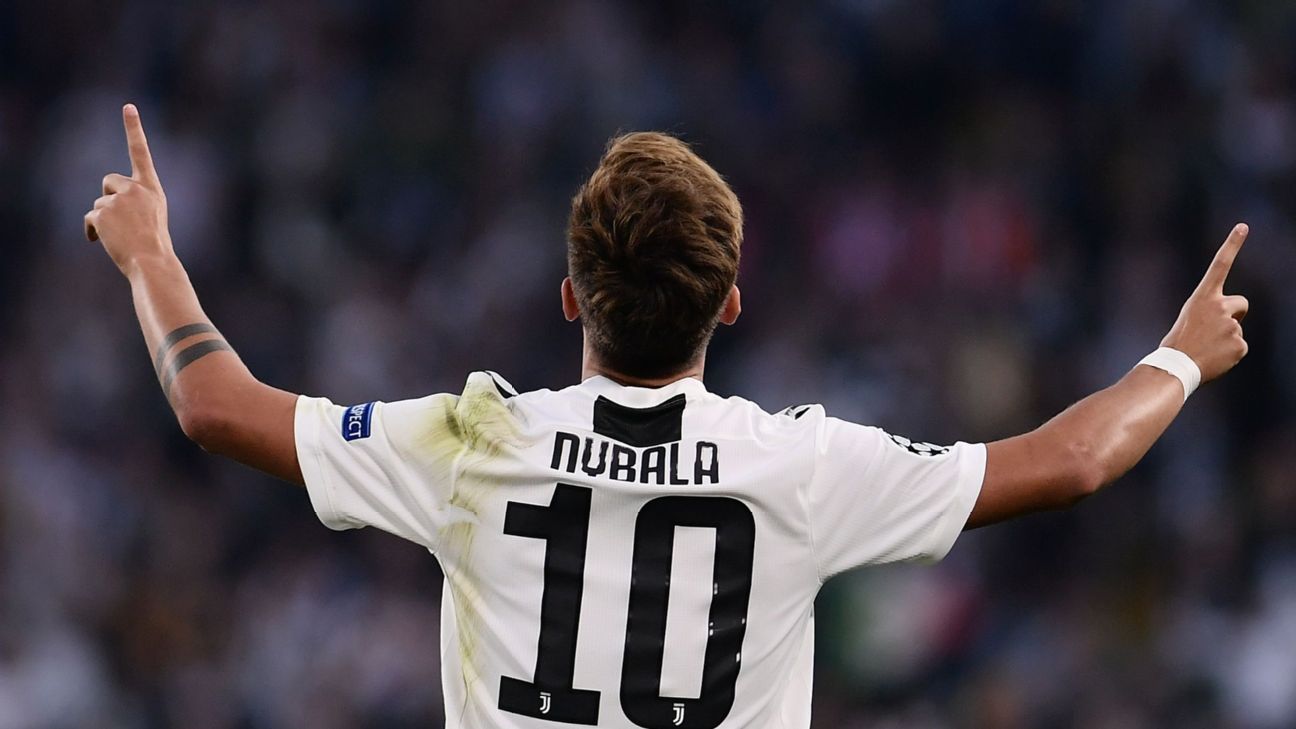 
The Premier League transfer window has closed, but the rest of Europe remains open for business. Plus, it’s never too late to look forward to January! Click here to view the latest transfers and keep up to date with the latest gossip below.

The Daily Mail claims Paris Saint-Germain and Juventus will hold talks in the coming days over a deal for Juve striker Paulo Dybala.

PSG sporting director Leonardo is set to meet with Dybala’s agent imminently, with the former hoping that a deal can be completed as early as Wednesday.

The 25-year-old was linked with a transfer to Manchester United, and was close to completing a move to Tottenham Hotspur on the final day of the Premier League transfer window, before the Serie A champions pulled the plug at the eleventh hour.

A deal is still there to be done with the Serie A champions, however, with Juventus bosses hoping to use the money generated by the Argentine’s sale to fund a move for Inter Milan’s Mauro Icardi.

There is believed to be some distance in the clubs’ respective valuations of former Palermo forward Dybala, but PSG are hoping to tie up a deal worth around £73 million.

11.07 BST: Juventus have been trying to move on centre-back Daniele Rugani and Tuttosport claims that Roma, Monaco and Barcelona are all interested in signing him.

10.39 BST: Bild reports that a potential deal to take Mario Mandzukic from Juventus back to Bayern Munich is now off after the club landed Ivan Perisic and Philippe Coutinho on loan.

All very well, but having lots of wingers and only Robert Lewandowski up front could come back to haunt them.

Valencia revealed last week that Rodrigo had come close to joining Atletico but the deal did not materialise. However, Rodrigo’s future at Valencia is still up in the air with Superdeporte claiming Valencia president Peter Lim wants to sell the Spain international to bring not just for the money, a reported €60m, but to allow South Korean winger Kang In Lee to have a bigger role in the team.

Speaking after his team’s 1-0 win over Getafe on Sunday, Simeone told reporters: “We can’t talk about Rodrigo because he’s at Valencia CF. We have to speak about the players that are here and work with those that we have until the end of the transfer window.”

09.31 BST: Solskjaer was also asked ahead of tonight’s match at Molineux about Paul Pogba‘s future at Manchester United.

With two weeks to go before the European deadline, there is still speculation surrounding the midfielder amid interest from Real Madrid. The France international reignited talk of a move to the Bernabeu by saying there was a “question mark” over his future after the 4-0 win over Chelsea, but Solskjaer insists Pogba will remain a United player this season.

“You [the media] always put question marks around Paul,” Solskjaer said. “I don’t think it’s odd saying enjoy playing, I have fun with my teammates, I enjoy what I’m doing, I love my job and enjoy the game.

“There’s not one press conference that I’ve not answered a question about Paul Pogba — 80 percent of what he said was that he enjoyed that game and his time here. I’ve got absolutely no concerns on Paul. For me, yeah he’s going to stay.”

A Barca statement revealed the details of the move: “Bayern Munich will pay €8.5m and the player’s wages. The agreement also sees an option to buy for Bayern fixed at €120m.”

Though Bayern might not be too happy with that…

Bayern Munich’s statement on the Coutinho deal: “The parties have agreed not to divulge the financial details of the agreement”

Barcelona’s: “Bayern Munich will pay 8.5m euros and the player’s wages. The agreement also sees an option to buy for Bayern fixed at 120m euros”

08.51 BST: Paris Saint-Germain left Neymar out of their squad for the second consecutive week on Sunday, and the move backfired on coach Thomas Tuchel as the French champions were stunned by a 2-1 defeat at Rennes.

After the match, Tuchel said: “Neymar will not leave without recruitment, it is not possible. That is clear. If he stays, we will have a player who wins one-on-ones. We lacked acceleration and timing. There were small situations where space was opened up, but we did not act decisively.”

08.25 BST: Manchester United turned down loan enquiries for Chris Smalling and Phil Jones on deadline day but sources have told ESPN FC they are still listening to offers for Marcos Rojo.

The Argentina international saw a move to Everton collapse on deadline day but Fenerbahce, AC Milan, Marseille and Monaco remain interested in securing a loan deal with an obligation to buy before the European deadline on Sept. 2.

“I do have too many centre-backs to keep everyone happy,” Solskjaer told reporters ahead of Monday’s Premier League trip to Wolves.

08.00 BST: Mario Balotelli has joined his hometown club Brescia on a free transfer after the striker chose to join them over Brazilian side Flamengo.

Balotelli, who was released by Marseille at the end of last season, returns to Italy for his third stint after playing for Inter, where he won three league titles, and AC Milan.

The 29-year-old Italy international will be presented at the Stadio Mario Rigamonti later on Monday, with media reporting he had signed a three-year deal with the club, who are back in the top flight for the first time since 2011.

The new league season begins this weekend but Balotelli must wait to make his debut as he serves a four-match ban after getting a straight red card in his final game for Marseille against Montpellier in May.

Reports at AS claim Real Madrid are in pole position to pip La Liga rivals Barcelona to the signing of Paris Saint-Germain forward Neymar, with the Spanish publication claiming a deal could be clinched in a matter of days.

It is believed talks between the two clubs have intensified in the last few hours, with negotiations centring around which Madrid players will head to the French capital as part of the deal.

PSG had previously demanded Brazilian youngster Vinicius Jr head to Le Parc des Princes as a makeweight in the transfer, but after Madrid bosses vehemently rejected that proposal, the likes of James Rodriguez, Raphael Varane, Isco and Karim Benzema entered the fray.

While reports claim that former Barcelona star Neymar would favour a return to Camp Nou, the 27-year-old is not put off by the prospect of moving to the Catalan giants’ most bitter rivals.

Roma may have tied Edin Dzeko down to a new long-term contract at the Stadio Olimpico, but reports claim the Giallorossi are interested in bolstering their attack with the signing of Chelsea’s Michy Batshuayi.

The 25-year-old appears to be out of the first-team picture at Stamford Bridge, with new Chelsea manager Frank Lampard favouring both Olivier Giroud and Tammy Abraham for the lone striker role, leaving the former Marseille man pondering his long-term future.

Although no official contact has been made between the Serie A and Premier League counterparts, it is believed that Lampard is open to letting the striker leave west London — despite being unable to replace the player because of a season-long transfer ban.

A move for the Belgian hinges on the future of Roma’s Patrik Schick, with the Czech Republic international reportedly the subject of interest from a host of clubs in Germany.

– Fiorentina sporting director Daniele Prade has confirmed his side are interested in a move for former Bayern Munich winger Franck Ribery, says Calciomercato, but claims his side can’t compete with clubs in Russia and the Gulf Coast when it comes to wages. 36-year-old Ribery is a free agent after leaving the Allianz Arena at the end of last season.

– Stoke City loanee Scott Hogan is hoping he can earn a permanent deal at the Bet365 Stadium, reports The Telegraph, after the Republic of Ireland international scored against Derby County at the weekend — his first goal for the Potters since signing from Aston Villa in the summer.

– After previously being linked with a move to Wolverhampton Wanderers this summer, Calciomercato has claimed that AC Milan and Ivory Coast midfielder Franck Kessie will remain at the San Siro for the next year at least