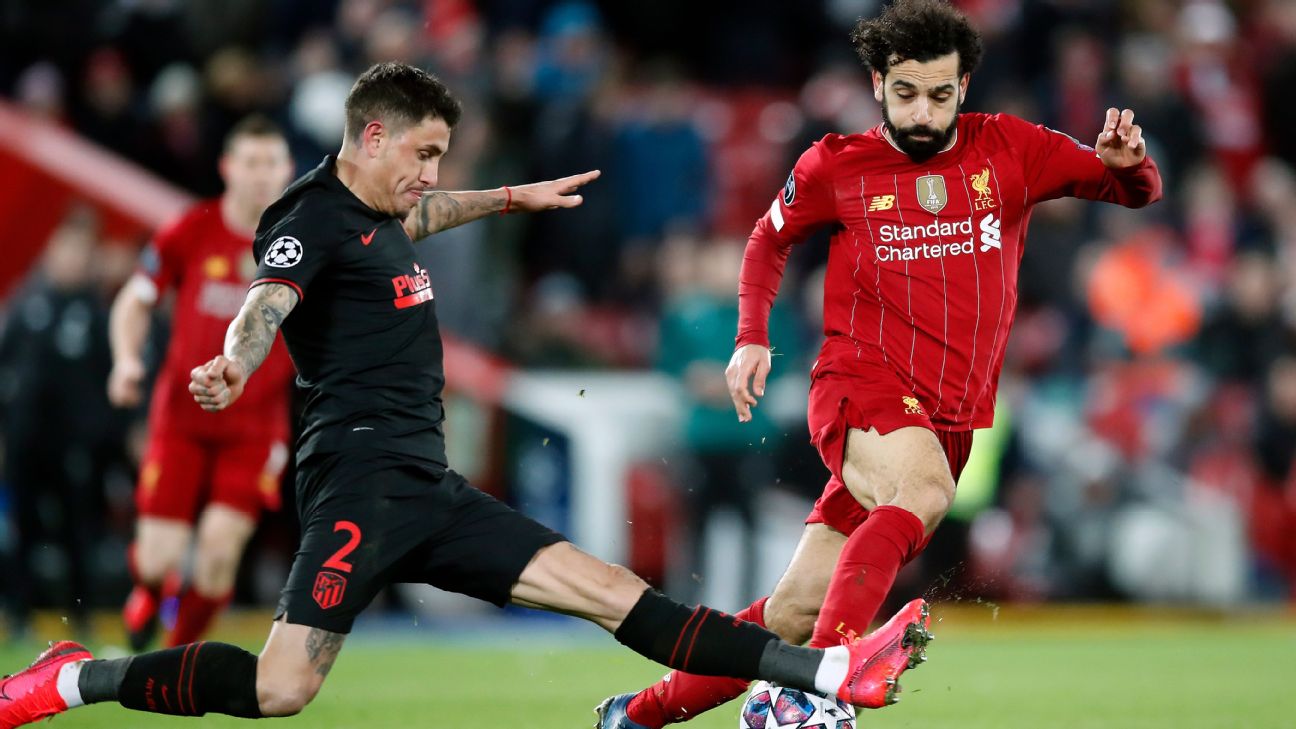 Jurgen Klopp is looking to strengthen his squad for next season, and AS are suggesting the German boss has lined up three possible replacements for centre-back Dejan Lovren: Atletico Madrid’s Jose Maria Gimenez, Inter Milan’s Alessandro Bastoni and RB Leipzig’s Dayot Upamecano.

Lovren is out of contract in 2021 but is expected to target first-team football elsewhere this summer, and Klopp wants a player who is as comfortable as Virgil van Dijk and Joe Gomez in the air and on the ball.

Gimenez is the perfect fit, though his contract runs out in 2023 and has a buy-out clause of €120 million. However, the Uruguay international has had an injury-hit season and has played only 16 times, including a cameo role at Anfield when Atletico stunned the Champions League holders. Gimenez might consider his options if he continues to struggle for first-team football.

Eagle-eyed readers will have seen Upamecano’s name on these pages linked with several clubs across Europe, while 20-year-old Bastoni has impressed so much at Inter that he has replaced Diego Godin at the San Siro.

Meanwhile, with Lovren looking likely to leave, he could have his pick of Lazio, Tottenham Hotspur and Arsenal in the summer, with the Italian side joining the north London rivals in the hunt for his signature.

The Croatian’s contract expires in 2021, but with Liverpool on the hunt for a new centre-back, La Gazzetta dello Sport reports that Lovren won’t struggle for options when the 2019-20 season finally comes to an end.

Lazio enquired about Lovren’s services in January but were unwilling to pay the €20m asking price. The Italian club are expecting the price to have dropped, however, as he continues to play second fiddle to Van Dijk and Gomez and as Liverpool grow increasingly eager to sell.

The 32-year-old is said to be keen for a new experience before he hangs up his boots, which suggests he might favour a move away from England.

08.42 GMT: Borussia Dortmund sporting director Michael Zorc has warned that “this summer will be unpleasant” amid the ongoing coronavirus crisis.

The German club have strongly been linked with players such as Birmingham City midfielder Jude Bellingham and Paris Saint-Germain wing-back Thomas Meunier. But Zorc told kicker that “there is a lot of uncertainty in all clubs,” and added: “We first must manage the crisis situation.”

Dortmund in January brought in midfielder Emre Can from Juventus and Norwegian wunderkind Erling Haaland and, with no income over the next few weeks or even months, BVB have, for now, put all transfer activity on hold.

“We don’t even know when we’ll be able to play again,” Zorc said and warned: “This summer will be unpleasant.”

08.00 GMT: Barcelona tried, and failed, to get Neymar back last summer. Yet sources have told ESPN that the Spanish champions have a bold plan to reunite the Brazilian star with Lionel Messi at Camp Nou this summer.

Sam Marsden, Moises Llorens and Eduardo Fernandez-Abascal tell the story of how FIFA article 17 works, how it’s been used in the past and how Barcelona hope to use it to their advantage for one of the most stunning transfer heists the sport would ever see.

– Inside Barcelona’s audacious plan to get Neymar back

Chris Smalling is so keen to stay in Rome that he’s willing to ignore overtures from Arsenal and take a pay cut, reports Sky Sports Italia.

Smalling has impressed in the Italian capital following his loan switch from Manchester United, and both the player and his family are settled off the pitch, which means he’s prepared to lower his wages to stay where he is.

The 30-year-old is due back in Manchester when his loan deal finishes in June, but the Reds will sell if Roma are prepared to part with £32m.

Arsenal are also monitoring the situation as they continue their search for a centre-back.

Smalling has spent 10 years at Old Trafford and has amassed 323 appearances in that time.

– Manchester United are interested in signing 34-year-old defender Diego Godin this summer, according to Corriere dello Sport. Godin has been pushed out of the Inter Milan first team by Bastoni, and the Uruguayan looks set to be on the move just one year after joining Inter from Atletico.

– Juventus, Manchester and Barcelona are all tracking Paris Saint-Germain’s highly rated youngster Edouard Michut, according to Calciomercato. The midfielder has been dubbed “the new Marco Verratti” thanks to his technical ability in a deep-lying role. The 17-year-old is yet to sign professional forms at PSG, and Barcelona have already sent scouts to watch him. Juventus could lead the pack, though, thanks to their positive relationship with PSG.