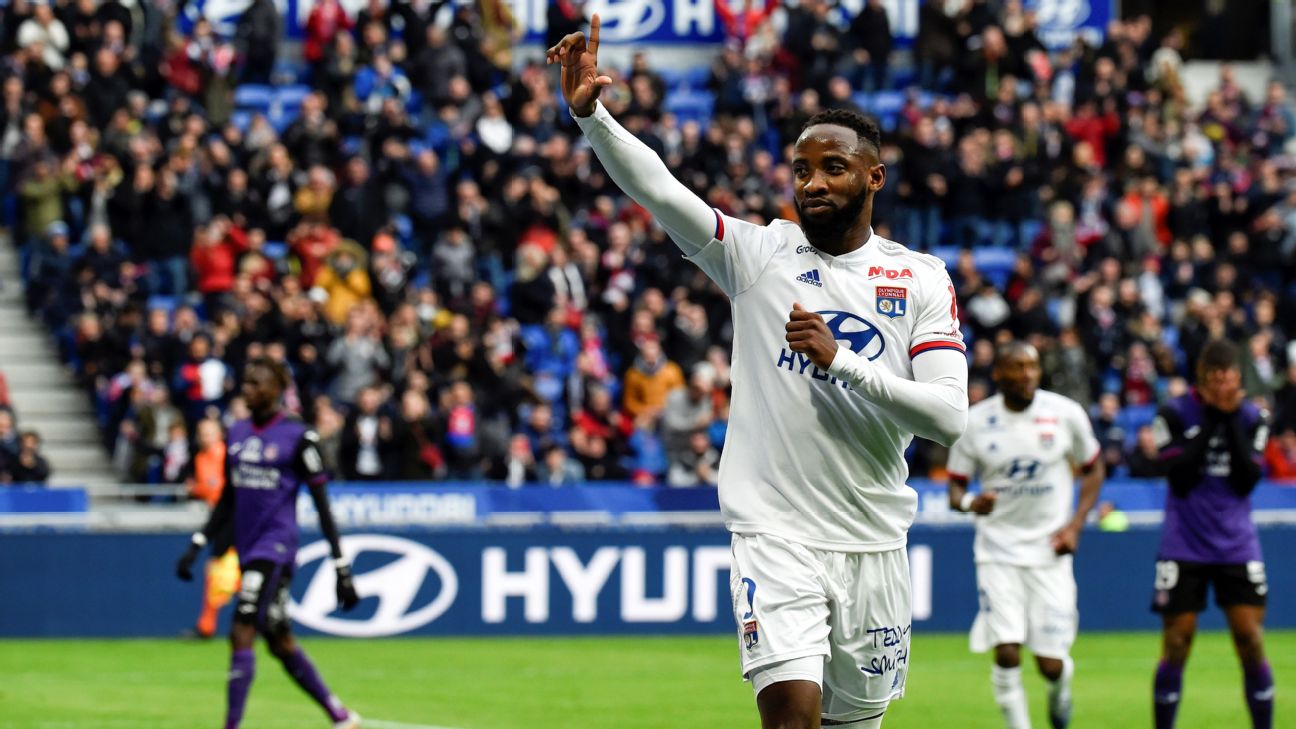 The winter transfer window is closed, but now it’s time to look ahead to the summer! Here are the new rumours floating around following the Jan. 31 deadline day.

The summer scramble to secure the services of Moussa Dembele seems to have already begun after Lyon’s president admitted that the club would “sell the players who want to leave.”

That news has reportedly been received with glee at both Old Trafford and Stamford Bridge, with the Sun reporting that Jean-Michel Aulas’s admission would set things off at both clubs. The 23-year-old was the subject of a €40m offer from Chelsea during the January transfer window but Lyon didn’t budge. Now Frank Lampard’s side are expected to try for a second chance as soon as possible.

Chelsea, though, will face some domestic competition in the form of Manchester United, with Ole Gunnar Solskjaer’s side also keen on bringing Dembele in and are willing to spend €70m says the Daily Star.

The former Celtic goal machine, who began his career at Fulham, has been in typically prolific form this season and may well be keen on a return to England after proving himself in both the Scottish and French leagues. Solksjaer reportedly watched Dembele twice in January and switched his attention to the French star after losing out on Erling Haaland, who has been off to a remarkable start at Borussia Dortmund. The race is on.

12.36 GMT: El Desmarque reports that Real Madrid star Isco is on the radar of Arsenal, Chelsea and Manchester City.

Isco, 27, could be sold as Real try to land Kylian Mbappe from Paris Saint-Germain. While he could also be included as part of that deal, with PSG landing the Spain international as well as at least €150m.

Arsenal need some creativity, especially if Mesut Ozil departs; Chelsea just signed Hakim Ziyech from Ajax for €40m, so that seems unlikely; while City will need to replace David Silva, who is due to leave the club when his contract ends this summer.

11.57 GMT: Manchester United’s Paul Pogba wants to leave the club in the summer, but United have set a price of around €100m (£83m) says the Guardian.

Pogba, 26, hasn’t played since Boxing Day due to injury but would be open to return to Juventus next season, according to his agent Mino Raiola.

United had previously been keen to recoup £150m for the France midfielder, so the price drop seems like an effort to get as much as they can given how obvious it is that he’s keen to depart.

11.12 GMT: Tottenham could be set to sell Eric Dier as the midfielder/defender/full-back is stalling over a new deal, says the Daily Mail.

Dier’s contract expires in 2021 and he’s unhappy about his lack of game time this season, but chairman Daniel Levy won’t want another Christian Eriksen situation, so if he doesn’t sign up then we can expect him to be sold.

Emmanuel Adebayor receives a hero’s welcome as he arrives at the airport near Asunción.

He is joining up with former teammate Roque Santa Cruz at Paraguayan club Olimpia 🇹🇬🇵🇾⚽️pic.twitter.com/TokIsdFItC

10.15 GMT: Weird story from Sky Sports here, claiming that “Borussia Dortmund winger Jadon Sancho is focused on this season with the German side, amid growing interest in him from Europe’s top clubs.”

Sancho, 19, has Liverpool, Manchester City, Chelsea and Manchester United all keen on him, as well as Barcelona and Bayern Munich from Europe. The winger is worth £120m and has the continent’s top clubs all chasing him, so we’re sure it’s great to know that he “remains committed to Dortmund this season.” Especially seeing as he can’t move anywhere until July 1.

09.31 GMT: Real Madrid are prepared to compete with rivals Barcelona to sign Inter Milan forward Lautaro Martinez in the summer, sources close to the player have told ESPN.

Martinez — who has scored 16 goals in all competitions this season — would be available for €111m in July under a clause in his contract with the Serie A club.

There has been concern at the Bernabeu at a lack of goals from the Madrid forward line this campaign, with an over-reliance on Karim Benzema and €60m summer signing Luka Jovic struggling to adapt to Spanish football.

09.03 GMT: Nicolas Otamendi says he intends to see through his Manchester City contract that runs until June 2022 amidst reports he would love to play for River Plate.

Otamendi’s friend, Martin Sendoa, revealed to Tyc Sports that the Argentina international is “dying to play for River.”

Otamendi told Argentine radio station La Red): “Martin is my friend but not my agent. My agent is Jorge Mendes … I have two years left on my contract with City. I’m very happy and my focus is here and to complete it [contract].

“My family and my children are happy. We will see. I’m a River fan but I’m happy here and we have important challenges coming up. I’m focused on the club. I haven’t spoke to anyone at River.”

08.29 GMT: Levante have told Barcelona they will only be able to sign their striker Roger Marti if his €30m release clause is met, according to Marca.

The Spanish forward has reportedly become the leading candidate to replace injured Ousmane Dembele at Barcelona. However, Levante have told Barca assistant sporting director Ramon Planes they have no intention of entering negotiations for the sale of Marti.

Roger, 29, is the club’s leading scorer with 10 goals in 22 league games this season. His contract with Levante runs until June 2023.

08.00 BST: Manchester United midfielder Paul Pogba would be open to return to Juventus next season, according to his agent Mino Raiola.

Pogba, 26, has not played a game since Boxing Day due to an ankle injury and has been linked with a move away from Old Trafford. Raiola, who in December said the France international would not leave the club, has now hinted that Pogba could make a move back to Italy.

“Italy is like home for Paul,” he told reporters. “He would not mind going back to Juve but we will see what will happen after the Euros. “Paul wants to play at the best level but he can’t escape by Manchester United if they are in a difficult situation.”

RB Leipzig defender Dayot Upamecano is the latest option to emerge for Manchester City, according to the Manchester Evening News.

It’s no secret that Pep Guardiola has had trouble finding suitable replacements on the backline following the exit of Vincent Kompany, the injury woes of Aymeric Laporte, and the struggles of John Stones and Nicolas Otamendi.

Now it is being reported that French youngster Upamecano will be on the radar of the Premier League champions. But as is the usual case, they’ll have to fend off the likes of Real Madrid and Barcelona for the 21-year-old’s signature. The Bundesliga side’s asking price for Upamencano? The cool, reasonable price of £50 million.

Juventus are ready to tempt Willian with a move to Serie A as soon as the transfer window opens this summer.

That’s according to the Daily Express, which claims that Willian’s current refusal to sign a new one-year deal has given the green light to Juve to try their luck with the inspirational Brazilian.

The winger apparently wants a two-year deal but Chelsea aren’t budging — which has given the Turin giants hope that they can take the 31-year-old from West London to Northern Italy when he becomes a free agent at the end of the season.

Willian has played 31 times for Chelsea this season, scoring five goals so far including both strikes in the 2-0 win at Tottenham in December.

– The Daily Express claims that Tottenham Hotspur are ready to raid Norwich for both Ben Godfrey and Max Aarons this summer in a double swoop that could cost as much as £80m. The Canaries rate defender Godfrey at £50m, while putting a pricetag of £30m on midfielder Aarons, but Spurs are reportedly willing to splash some cash as Jose Mourinho reshapes the squad.

The report states that Tottenham won’t be the only ones going for Godfrey. Other potential suitors include Arsenal, Borussia Dortmund, and Lyon. But Spurs are giving Mourinho a £120m warchest, which could provide them with the inside track on the duo.

– Juventus have joined the chase for Birmingham’s teenage prodigy Jude Bellingham, according to Daily Mail. Man United and Chelsea have expressed interest in him and now it seems that Italian champions have joined an increasingly lengthy list of clubs looking to lure the 16-year-old from St Andrews before he’s even old enough to buy a pint.