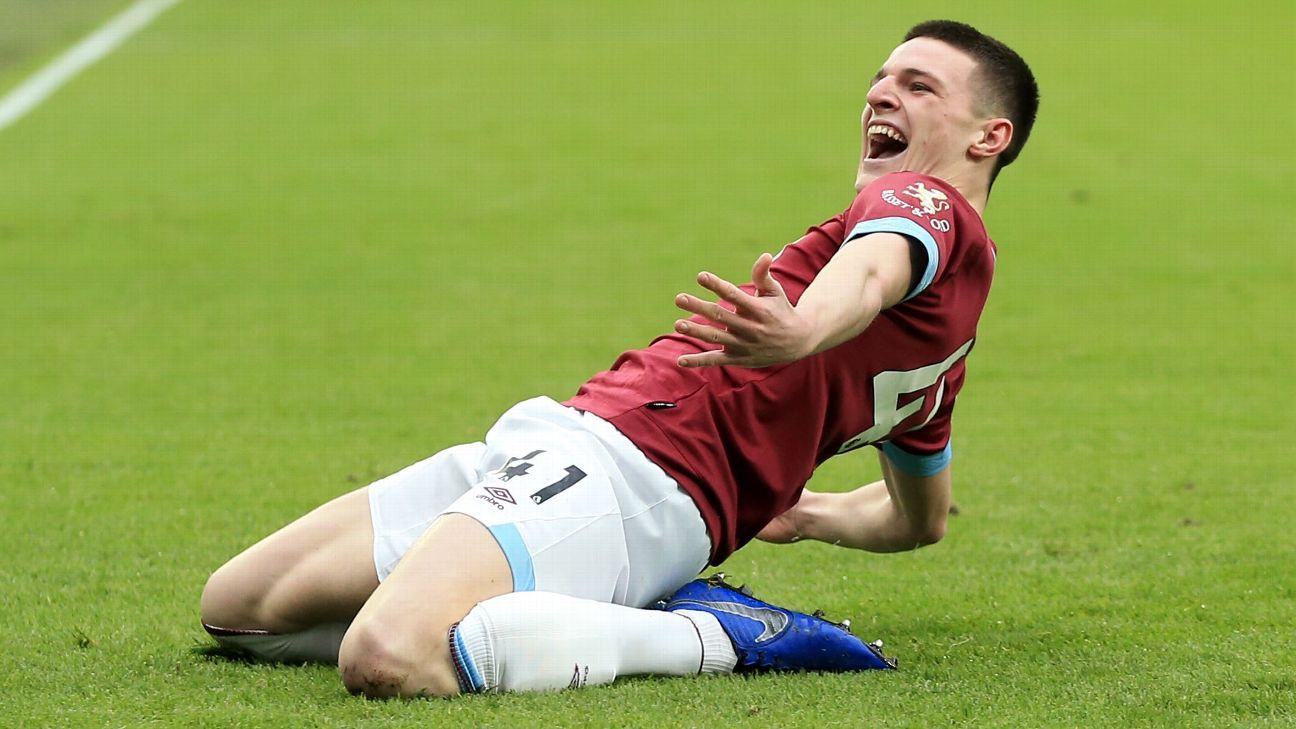 TOP STORY: Rice could be headed back to Chelsea

Chelsea are keen to add West Ham United’s defensive midfielder Declan Rice to their squad for next season, according to Sky Sports.

Chelsea released the England international as a youth player after eight years at the club in 2014, but they are keen to bring him back and add his consistency to their squad. Rice has arguably been the Hammers’ most impressive performer this season, contributing two assists in 29 Premier League games before the coronavirus pandemic halted domestic proceedings.

Rice has four years left on his contract at the London Stadium and so could come at a high price, but Chelsea are keen to add his anchoring abilities to protect their back four.

Rice is close friends with Blues midfielder Mason Mount and so would be keen on a move back to Stamford Bridge, the duo having already played together for England.

12.00 GMT: Odion Ighalo is facing an uncertain future at Manchester United with his loan deal set to expire on May 31, sources have told ESPN.

The striker moved to Old Trafford in a short-term transfer from Chinese side Shanghai Shenhua on the final day of the January window.

As things stand, the Premier League are committed to finishing the season even if it means playing games through the summer and beyond. But unless Ighalo’s loan can be renegotiated, the Nigeria international will have to leave on May 31.

Tottenham Hotspur’s Harry Kane has a big decision to make this summer, and ESPN FC’s Ale Moreno believes it is time he took the leap to a bigger club.

Rose, 29, moved to St James’ Park at the end of January for the remainder of the season, playing six matches before the coronavirus crisis saw the campaign suspended indefinitely.

The England international’s contract at Spurs is due to expire in June 2021, but I Sport claims that the London club would be willing to sell for a price in a similar way that saw Christian Eriksen depart for Inter Milan in January for €20m with just six month left on his deal.

09.58 GMT: Boca Juniors want to Paris Saint-Germain’s Edinson Cavani to partner Carlos Tevez in attack, according to Ovacion in the striker’s native Uruguay.

Cavani, 33, is out of contract in June and saw a move to Atletico Madrid fall through in January.

PSG teammate Leandro Paredes is reportedly playing a role in the move by selling the idea to Cavani through his infectious passion for Boca.

Despite the fervour surrounding Boca and their mythical Bombonera home, remaining in Europe remains Cavani’s priority.

Also, in order for it to come to fruition, Boca would also need to extend Tevez’s deal, which is also up in June.

09.22 GMT: As Barcelona look to make use of Article 17 of FIFA’s transfer regulations in their audacious bid to re-sign Neymar from Paris Saint-Germain, ESPN FC’s Gab Marcotti gives an explanation of this little-known rule.

08.46 GMT: Bayern Munich full-back David Alaba has switched agents amid reports of interest from European top clubs such as Manchester City, Barcelona and Real Madrid. The 27-year-old has been with Bayern since 2008 when he joined the club from Austria Vienna as a 16-year-old.

Having been an essential part of the club’s senior team since 2010, bar a short loan with Hoffenheim, the defender appears open to a move from away from the Allianz Arena, where he is under contract until 2021.

Amid rumours that some of Europe’s biggest clubs have made Alaba a transfer target, the Austria international chose to be represented by Pini Zahavi in the future.

However, the Israeli “super agent,” who played a part in Neymar’s world-record $222m transfer from Barcelona to Paris Saint-Germain, also represents Bayern attacker Robert Lewandowski for whom he negotiated a new contract at the Allianz Arena.

08.00 GMT: Real Madrid are looking to strengthen their attack for next season, and newspaper Marca claims that Erling Haaland is their number one target.

Madrid need competition for top scorer Karim Benzema, with other current alternative Mariano Diaz — who scored his first goal of the season in this month’s Clasico — also likely to depart this summer.

Marca reports that the club are prioritising a European forward, with their three non-EU player slots occupied by Vinicius, Rodrygo and Eder Militao — and they say that puts Haaland at the front of the queue, ahead of the likes of Inter’s Lautaro Martinez.

Haaland, 19, has scored twelve goals since signing for Borussia Dortmund for €20m in January. Last week his agent Mino Raiola said Haaland “will be at Dortmund for the necessary time… I don’t think he’ll leave Dortmund this summer.” 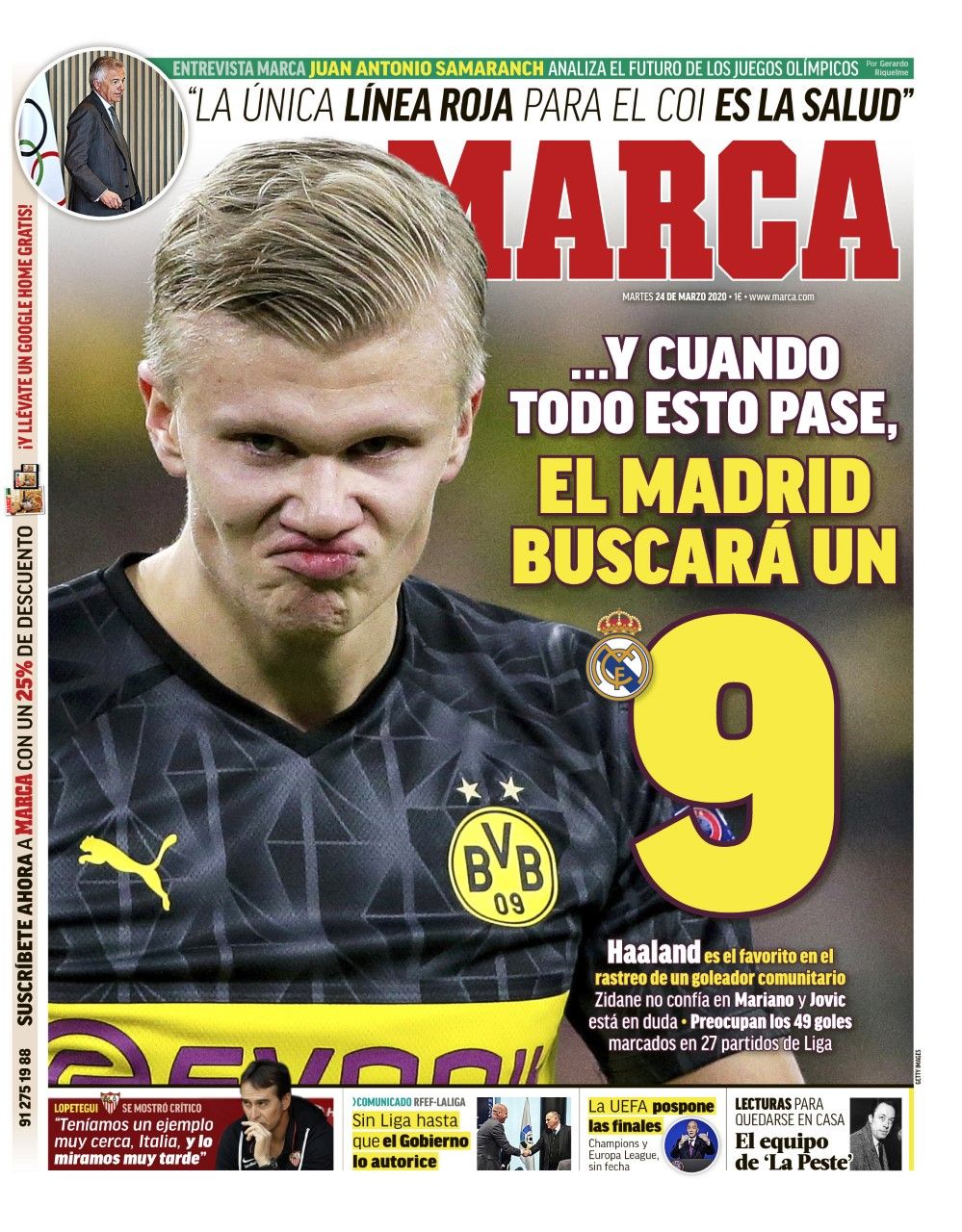 Bayern Munich have used the enforced break in the season to sound out Barcelona for goalkeeper Marc-Andre ter Stegen, according to Sport.

The German’s contract ends in 2022, but he is stalling on signing an extension. Similarly, while Bayern had looked set to extend Manuel Neuer‘s contract before the coronavirus outbreak stopped play in Germany, the club have now change direction and instead have considered a change between the posts. Neuer’s extension is being further complicated by the player’s tense relationship with club president Franz Beckenbauer.

Neuer is 33 and has suffered from a range of injuries in the past few seasons. Ter Stegen is six years his junior and is widely considered one of the best goalkeepers in the world.

More news from west London tonight: While Goal have been suggesting that Chelsea are closing in on Leicester City’s Ben Chilwell, as reported here earlier, Sport suggests that the Blues are instead looking at Brazilian full-back Alex Telles.

The reason for the change in target is the price Leicester City appear to be demanding for the defender, who could cost the Blues in the region of €90 million. Chelsea are wary of how much Manchester United had to pay to land Harry Maguire last summer.

In contrast, Telles is valued at around €40m. His contract runs out in 2021 and so Porto are likely to sell to avoid losing him for nothing next summer.

Telles, 27, is also a target for Barcelona, who are looking to the prospect of a busy summer under boss Quique Setien.

Sport suggest that if Frank Lampard is unsuccessful in his bid to sign Telles, a third option could be Getafe’s Marc Cucurella, who could cost as little as €25m.

– Transfer Grades: All the big moves rated
– When does the transfer window reopen?
– All major completed transfer deals

– Manchester United will sign striker Odion Ighalo for up to £15m this summer after the loan player’s existing stay runs out on May 31, says the Daily Mail. Ighalo’s temporary move from Shanghai Shenhua is set to end earlier than most loan deals, and while United are hoping to extend the deal should the season continue into June and beyond, as expected, it looks like they’re also prepared to make the move a permanent one. With four goals in eight games, it’s little wonder.

– Napoli are keen to sign Lazio’s star striker Ciro Immobile, reports Calciomercato. Immobile is on 27 goals for the season, just nine behind Gonzalo Higuain‘s all-time record, and his form has been attracting admiring glances from all over Europe. Napoli were said to be interested in Immobile when he left Sevilla in 2016, and they lead the chase now, though the striker’s contract runs until 2023.