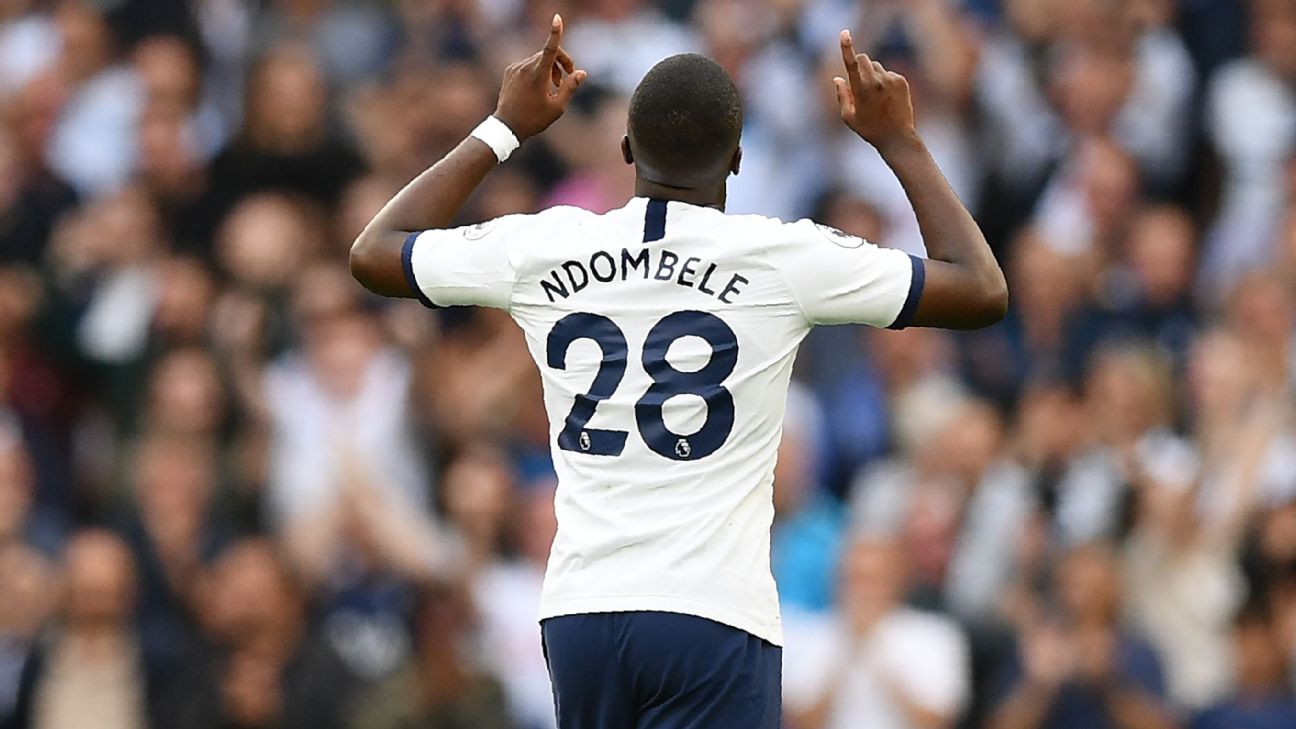 Barcelona have reignited their interest in Tottenham Hotspur midfielder Tanguy Ndombele, according the Mundo Deportivo.

The Catalan sport daily reports that Ndombele, 23, was being considered as a transfer target last season when he was catching attention with his performances in the Champions League with Lyon.

The France international instead moved to Spurs, but he has had regular struggles with his fitness since his club-record £53m transfer to north London as well as dealing with the mid-season change of manager from Mauricio Pochettino to Jose Mourinho, who was recently critical of the powerful midfielder’s condition.

The Mundo Deportivo report adds that Ndombele is one of two options for Barca, who are also considering a move for Napoli midfielder Fabian Ruiz as they look to move Ivan Rakitic and Arturo Vidal out of the squad this summer.

12.20 GMT: Real Madrid have put their summer transfer plans on hold — leaving possible moves for Paul Pogba or Lautaro Martinez up in the air — with uncertainty over the financial impact of the coronavirus, sources have told ESPN.

The full effect of COVID-19 on the club’s income, with La Liga suspended indefinitely and a state of emergency declared in Spain until at least 11th April, is yet to become clear.

Sources have told ESPN that Real Madrid’s squad building plans for next season have been paused until they have a better idea of when the 2019-20 season could restart and be completed, if at all.

Even with his contract expiring in 2021, ESPN has been told that Manchester United still value Pogba at over €100 million, and Madrid would not be willing to go that far, given other transfer targets.

The German side have suggested privately they could lose Sancho this summer but will demand a fee of around €130 million for the 20-year-old, who has scored 14 Bundesliga goals this season.

United are at the head of the queue after Solskjaer made the England international one of his primary targets as he looks to revamp his forward line.

Sources have told ESPN that United have become notorious for dragging their feet in negotiations and risk losing out to a rival unless they, according to one source, “get their act together quickly.”

11.17 GMT: ESPN FC’s Julien Laurens believes that Arsenal striker Pierre-Emerick Aubameyang, linked with Barcelona and Manchester United in recent months, holds all the cards when it comes to his future.

10.39 GMT: Marca is expecting a busy summer at the Bernabeu despite the current suspension of La Liga, outlining “seven pieces of homework” for Real Madrid to resolve before next season.

The paper’s front page declares that “signing a goal scorer is a priority” after Luka Jovic has failed to convince, while Madrid are also looking to make decisions on the future of Luka Modric — whose contract expires in 2021 — and whether Martin Odegaard should return early from his Real Sociedad loan.

Other items on the agenda are the future of Achraf Hakimi, who has spent the last two seasons at Borussia Dortmund, signing Donny Van de Beek from Ajax, Alphonse Areola continuing as reserve goalkeeper, and whether Dani Ceballos should be sent on another loan or sold.

09.58 GMT: Germany’s 2014 World Cup final Mario Gotze has seen his career has come to a standstill, and the midfielder has fallen from grace at Borussia Dortmund.

Talks over a new contract at the Westfalenstadion have long ended and the27-year-old will be available on a free transfer in the summer.

Sport1 reports that Bayer Leverkusen are loosely interested in Gotze, who has also been linked with a switch to Inter Milan.

09.24 GMT: Napoli defender Kalidou Koulibaly has ling been one of Europe’s most sought-after centre-backs — could this be the year he finally makes his big move? If so, he’ll have his pick of destinations, according to ESPN FC’s Julien Laurens.

08.41 GMT: Tottenham Hotspur defender Jan Vertonghen has spoken about the big decision he has to make about his future as his contract at the club winds down.

Vertonghen, 32, has just a few months remaining on his Spurs deal, and told Belgian TV show De Kleedkamer that his post-retirement plans will also come into play as he makes a call on what to do next.

“I’m in a process right now that I have to grab a piece of paper and write down the pros and cons of the options I will have soon,” he said.

“And also, very importantly, which competitions and prizes I still want to win. I don’t want to regret anything in my career.”

Vertonghen has been linked with a move to Inter Milan, where he would reunite with former Spurs playmaker Christian Eriksen, who was also his teammate at Ajax before they moved to Spurs.

08.00 GMT: With a lack of takers for Germany international Kai Havertz amid the coronavirus crisis, the midfielder could remain at Bayer Leverkusen for another season and agree to a new contract with a release clause below €100m, kicker reports.

The Champions League club initially held out for a fee in the €120m region, but already prior to the current crisis Havertz, under contract until 2022, was not subject of a bidding war by European top clubs despite all the 20-year-old’s talent.

Although Leverkusen have already spent parts of the planned Havertz windfall, the club, owned by pharmacy giant Bayer, do not fear to run into financial difficulties.

Sporting executive Rudi Voller told kicker: “We have the best German player of the next ten years with Kai. I don’t have any reason to worry about Bayer.”

Manchester United believe they can bring Jadon Sancho to Old Trafford this summer, that’s according to the Daily Mirror.

The deal will cost them £120 million, a fee that is putting off other would-be suitors including Liverpool, Chelsea and Spanish giants Barcelona and Real Madrid.

Sancho left Manchester City for Borussia Dortmund in 2017 for just £8m, but now it looks as though the exciting attacking winger could return to the city for a far bigger fee. The player himself is said to favour United where he can line up alongside England teammate Marcus Rashford, and where he is guaranteed more game time than, say, Liverpool.

United are desperate to land a marquee signing and they have long courted a player considered one of Europe’s hottest properties.

The Mirror suggests that United are willing to spend more than the £89m they paid for Paul Pogba in 2016.

Griezmann to be given No. 7 shirt at Manchester United

United would appear to have their tails up, for Mundo Deportivo are also reporting that the Reds lead to the race to sign Antoine Griezmann, a player they think is the perfect fit for the No. 7 shirt currently occupied by Alexis Sanchez.

Barcelona are reportedly ready to sell the Frenchman for £90m and United are preparing an ambitious bid. Griezmann has failed to impress at Camp Nou and, despite the fact he’s only been there for one season, the club are looking to cash in so they can revamp their squad.

Griezmann was linked with a move to United in 2017 but he instead opted to stay at Atletico Madrid, then under a transfer embargo, until Barca paid his £110m release clause.

But now United are confident of landing a big name and they’re willing to dangle the carrot of the famous No. 7 shirt, soon to be vacated by Sanchez, a player United expect to move on permanently.

Vidal to join Inter in the summer

Inter were keen to land the midfielder in January but failed as a result of Barca’s change in management following the appointment of Quique Setien. However, the situation has now changed. Barcelona need to sell players to lower costs and bolster their own spending funds, and the Chilean would make space for some needed income.

Moreover, Inter hold the key to the striker Barca really want, Lautaro Martinez, so any business they can do to help facilitate this deal is likely. This is perhaps why Corriere dello Sport are suggesting Barca are offering up to five players for the signing of Martinez, offering Arthur Melo, Jean-Clair Tobido, Carles Alena and Nelson Semedo as well as Vidal.

If Vidal goes alone, he is likely to cost between €10-15m, and both player and Inter boss Antonio Conte are interested on the deal going through.

– West Bromwich Albion will make loan star Filip Krovinovic a permanent signing this summer… if they’re promoted to the Premier League. The Croatia international has been in fine form this season since joining from Benfica, scoring two goals and registering four assists in 31 games. Benfica are expecting around £11m for the midfielder, though Daily Mail reports that the Baggies will try to negotiate the price down.

– Napoli are looking to sign both Layvin Kurzawa and Thomas Meunier from Paris Saint-Germain, according to le10sport. The duo are both out of contract in the summer and Napoli boss Gennaro Gattuso is said to be a big admirer of both players. Meunier has already turned down overtures from Inter Milan and sources have told ESPN that he is close to signing for Borussia Dortmund. Kurzawa has previously been linked with a move to Arsenal.