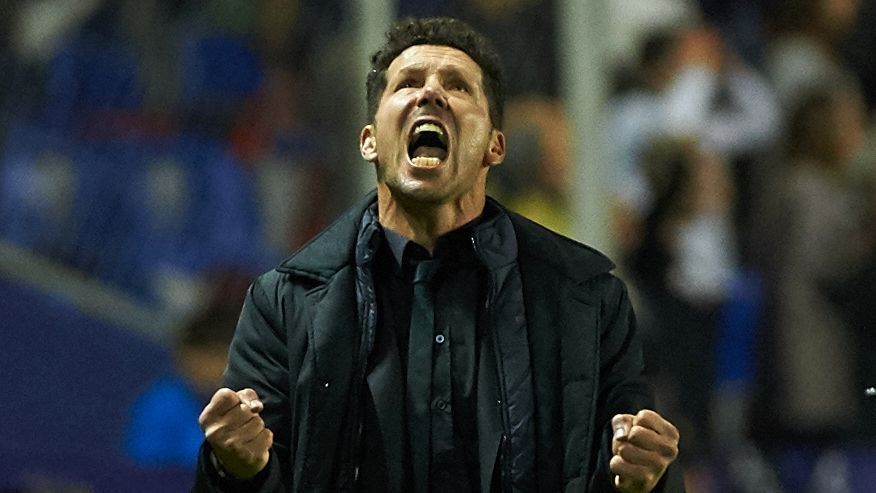 Simeone’s side were ahead on five minutes through Levante defender Rober’s own goal, with Kevin Gameiro accepting another gift on the half hour mark from the home defence.

Gameiro got his second of the game just before the hour mark, with Antoine Griezmann quickly following with two smart finishes in three minutes as a previously goal-shy Atletico shredded a sorry Levante defence.

After a week in which his team had drawn 0-0 at home to Real Madrid in La Liga, and beaten Roma 2-0 in the Champions League, the Rojiblanco coach told the postgame news conference that a general improvement in play was now being rewarded and he expected further improvement to come.

“These last three or four games the team has been improving, in intensity and pressing and creating chances,” Simeone said.

“Today the team’s potential in attack, above all with Griezmann and Gameiro, was present in full. The forwards are more relaxed, and that is renewing their spirits, and bringing positive energy.

“We played well against Roma, especially the second half, and from the start today. This will help us to keep improving.”

After his club’s first win at Levante’s Ciutat de Valencia stadium in over a decade lifted his team to third place, above Real Madrid on goal difference, Simeone said he had no preference for a result across town on Sunday when leaders’ Barcelona visit second placed Valencia’s Mestalla ground.

“I am only interested in Atletico Madrid winning here, at a ground we had not won for a long time. This was a very important game for us to win.

“I was most impressed by the work of the group. They all want to keep improving, the big players and the youngsters all competing and making it more difficult for me all the time.”

Atletico have not been beaten in any of their first 13 La Liga games this season, the longest run in the club’s history. Simeone said the key was facing each match in the same way, including Wednesday’s Copa del Rey last 32 second leg at home to third tier Elche.

“We do not think where we are playing, we always have the same intensity and motivation to win,” he said. “We must just think about our day to day, and next for us is Elche.”

Everton are top of the Premier League and primed to end decade of derby futility vs. Liverpool
Lampard hints frustration at Chelsea’s goalkeeper errors
Bale set for Tottenham start vs. West Ham, ‘a different player’ than at Real Madrid
Juventus to bump ahead of Arsenal for Lyon’s Aouar
Manchester United’s Harry Maguire brushes off talk of club crisis