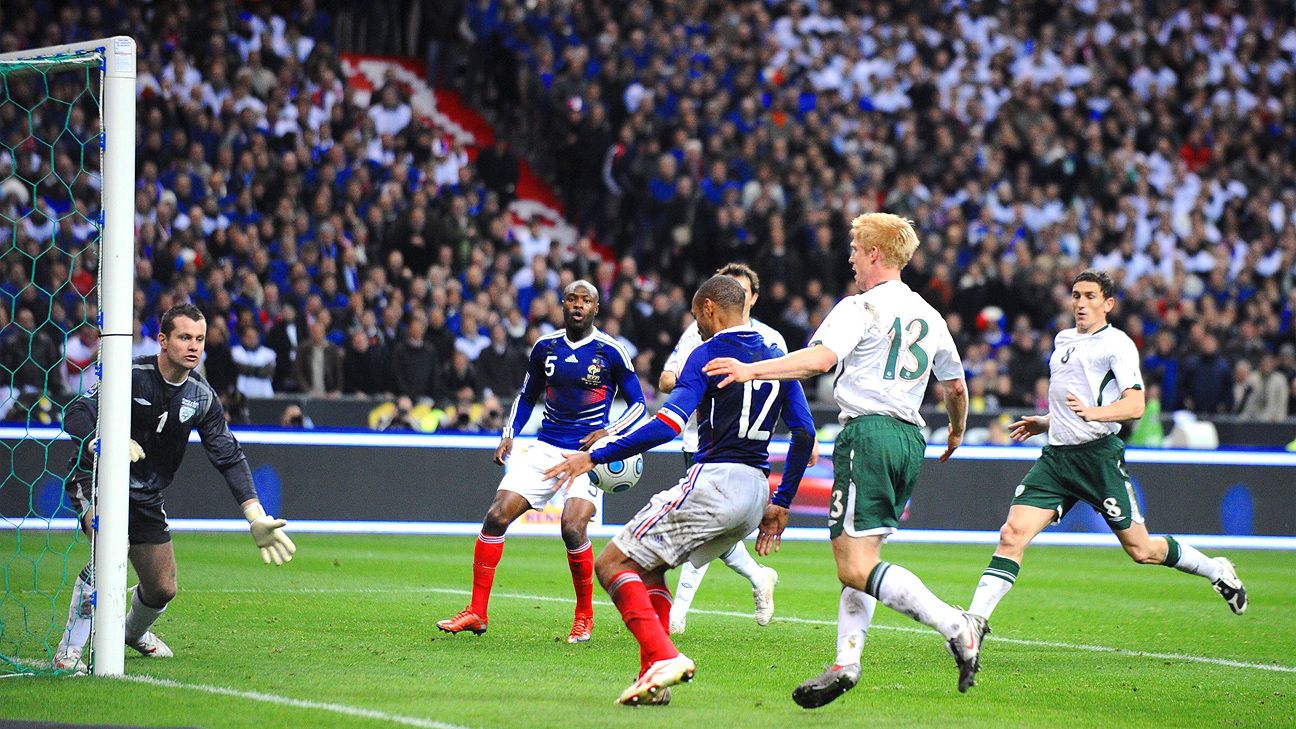 
The sense of injustice still burns, eight years on, for Kevin Kilbane. The former Republic of Ireland midfielder insists he has moved on from the moment that Thierry Henry ended his, and his country’s, hopes of a place at the 2010 World Cup with his infamous handball in Paris, but the bitterness remains.

“Football moves on and you have to move on,” Kilbane told ESPN FC. “You go back to your club, get on with life and move on, but when you look back and reflect on your career, yeah, there is a sense of bitterness and disappointment to go out of the World Cup the way we did.

“I had played at a World Cup, in 2002, but that didn’t make it easier. Having already experienced one, I wanted to go to another. The funny thing is, I was not bitter at Thierry for what he did. Things happen on a football pitch, but what really riled me and the other lads was the referee [Swedish official Martin Hansson] for being so arrogant about it.

“We knew something had happened, but he just wouldn’t listen. He just put his hand in front of his face and waved us away.”

Eight years on from that tumultuous night in the Stade de France, when Henry’s intervention enabled William Gallas to score the extra-time goal which cancelled out Robbie Keane’s first-half strike and secured a 2-1 aggregate victory for the French in their playoff, the Republic are on the verge of World Cup qualification once again.

Martin O’Neill’s team face Denmark over two legs — the first in Copenhagen on Saturday — and there is cautious optimism within the Irish camp of a first appearance at the World Cup since Kilbane and Co. reached the second round in Japan & South Korea 2002 before losing on penalties to Spain.

Ireland have a long and chequered history in the playoffs, dating back to a failure to qualify for the 1966 World Cup, but in more recent times there have been as many ups and downs.

None have been quite as painful and controversial as the elimination by the French, however.

“I’ve bumped into Thierry a couple of times since that night,” Kilbane said. “The subject didn’t come up the first time, but I was doing some television work during Euro 2016 and as I left the studio, Thierry came in to cover a later game, so we had a bit of a laugh about it.

“Everybody remembers the picture of Thierry with his arm around Richard Dunne after the game, with Thierry trying to console Dunney, telling him that he didn’t mean it. But come on, hang on a minute. He celebrated it, he knew what he was doing. You can’t give it the nice guy image all the time after what he had done.

“Despite all that, though, the bitterness is not directed at Thierry. Damien Duff said recently that he would have done the same in that situation and that’s the reality.”

Eight years earlier, Kilbane and Ireland tasted the flipside of playoff emotions, when Mick McCarthy’s team made it to the 2002 World Cup with a 2-1 aggregate win against Iran, which involved a daunting trip to Tehran for the second leg following a 2-0 win in Dublin.

“It was a really hostile atmosphere in Iran, something different to what we had experienced before,” Kilbane said. “We had given ourselves a cushion by winning 2-0 at home and we played really well out there to see it through.

“They scored late on to win the second leg 1-0, but we dug in and got the result to take us to the World Cup, which was massive. I had played and lost in playoffs against Belgium and Turkey, in 1997 and 1999, so it was fantastic to win one and qualify for a World Cup, but the big thing in 2001 was that we won the first leg.

“I think that is the key for the boys this time against Denmark — make sure you are still in the game after the first leg. Everyone inevitably points to the Henry handball as the decisive factor in 2009, but for me, our downfall was losing the first-leg at Croke Park.

“We didn’t play our game and ended up losing to a late Nicolas Anelka goal. It gave us a mountain to climb in Paris. In Iran, we had the lead and were able to hold onto it, so it’s crucial that we come back from Copenhagen with something.”

Success against Denmark will see the Irish qualify for successive tournaments under O’Neill and his assistant, Roy Keane, but Kilbane admits the sense of optimism makes him nervous.

“We always used to capitalise on our billing as underdogs, but Martin has got rid of that tag,” Kilbane said. “So people are quietly confident of a result against Denmark, but that worries me a little bit.

“Martin and the players have shown they can get big results when necessary, though. They have beaten Germany and Italy when they had to, did the same against Wales last month and they were very comfortable in beating Bosnia in the playoffs for Euro 2016.

“It will be tight against Denmark; Ireland will be very well organised at the back, but goals have been a problem for us. The big question is whether Martin will go with Daryl Murphy up front or Shane Long, who hasn’t scored now for quite a long time.

“It might boil down to Robbie Brady or James McClean coming up with a spark of creativity to make the difference, but Ireland are definitely in with a shout, especially if the tie is still in the balance for the second-leg in Dublin next Tuesday.”

Messi not at his best this season
Liverpool boss Klopp baffled by VAR, upset at injuries in Merseyside derby draw
Rashford, Fernandes both 9/10 as Man United pour on the style late
Bale set for Tottenham start vs. West Ham, ‘a different player’ than at Real Madrid
Manchester United’s Harry Maguire brushes off talk of club crisis