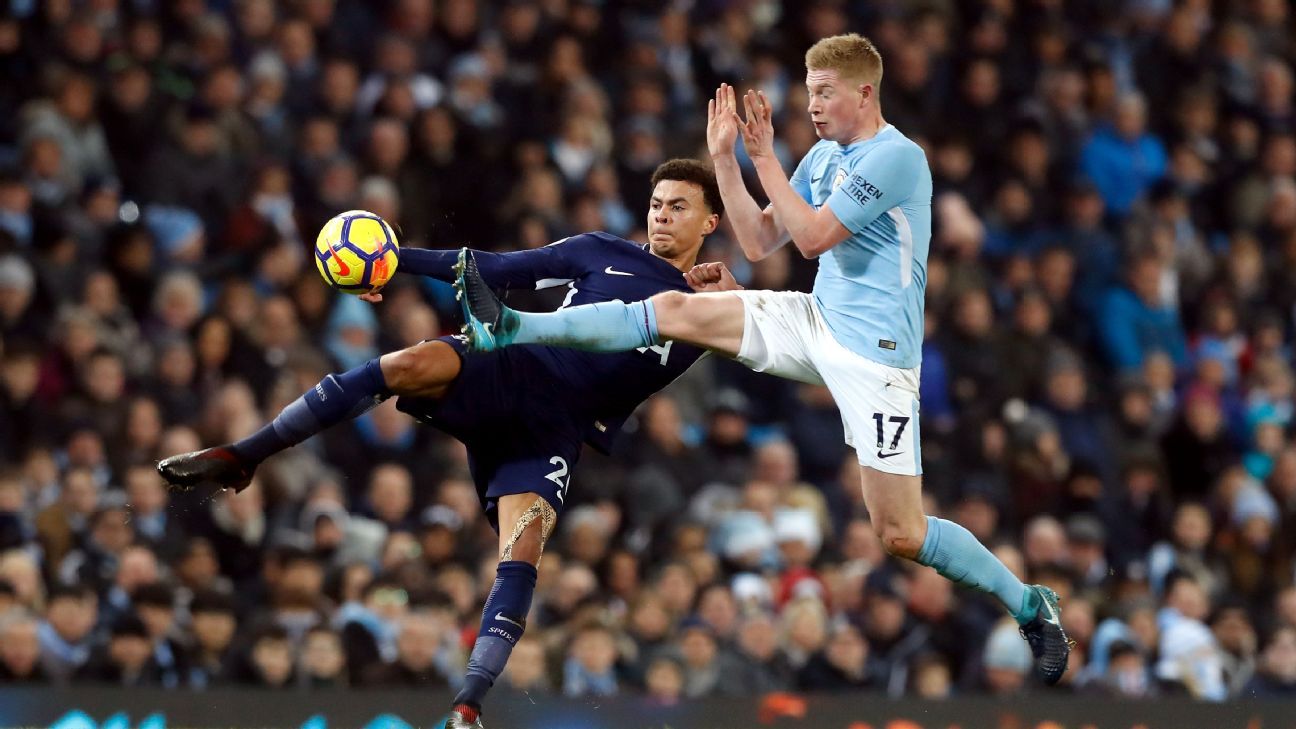 
MANCHESTER, England — There was a two-minute period during Manchester City’s 4-1 demolition of Tottenham Hotspur, which summed up what Dele Alli is and what he could — perhaps should — become. For the 21-year-old, the future can be seen in Kevin De Bruyne and Alli needs to watch the Belgian international closely to avoid his own talent going to waste.

With the clock on 67 minutes and Alli clearly frustrated by his team’s failure to compete against the runaway Premier League leaders, he threw himself into a challenge on De Bruyne with a combination of malice and recklessness.

The studs on Alli’s right boot caught his opponent just above the ankle, but referee Craig Pawson displayed leniency and only issued a yellow card for a challenge that probably merited a red. De Bruyne, perhaps relieved at avoiding injury, was diplomatic about the challenge after the game, despite slow motion replays showing it to be dangerous.

“I am a split second before Dele and it happens,” De Bruyne said. “It’s part of football.”

Tottenham manager Mauricio Pochettino, when asked whether his player was lucky avoid a sending off, ducked the question.

“I am not going to talk about individuals and names today because it is not fair,” he said. “Our collective performance was not how we expect. We were poor.”

Not for the first time in his career, though, Alli allowed his emotions to get the better of him. However, moments after taking out his frustrations, De Bruyne made him and Spurs pay; Alli could only watch as the City man, having received treatment, returned to score the home side’s second goal after a powerful break into the Spurs penalty area.

The goal, and the manner in which it was scored, was nothing new for De Bruyne; the 26-year-old has taken his game to a new level this season and he is already the outstanding candidate to win the Premier League’s player of the award.

Moreover, he is displaying the maturity that comes with experience, and his career is developing at speed under Pep Guardiola. By contrast, Alli has yet to find that same quality.

It is perhaps inevitable, given his age, that he will still suffer growing pains, but Pochettino has referenced his concerns over Alli’s development more than once this season, and it is when he is overshadowed so emphatically by the likes of De Bruyne that those concerns come into sharper focus.

De Bruyne is five years older than and the early part of his career was not without its challenges, most notably under Jose Mourinho at Chelsea. He suffered difficult days out of the spotlight before moving to Wolfsburg to rebuild his confidence.

But that was almost a case of “out of sight, out of mind,” and Alli does not have that luxury at Spurs. He has proven himself to be a class act in Pochettino’s team over the past two seasons, become an England regular and he showcased his talent and potential on the very highest stage during his two-goal performance in a Champions League victory against Real Madrid last month.

But since running rings around the European champions at Wembley, he has struggled to make any kind of impact. He has not scored since that game — his last league goal was on Oct. 22 — and the frustrations, which come to the surface when he is not playing well, are evident again.

Having missed Spurs’ first three Champions League games through a suspension incurred for a red card against Gent last season, Alli clashed with Ashley Young during a game against Manchester United in October, and this spiteful challenge on De Bruyne was another example of his inability to control himself.

He was substituted with six minutes left at the Etihad, but there was no petulance on this occasion; maybe he knew that he was lucky to still be on the pitch at all.

He is an outstanding talent, but Alli is beginning to look lost, and what happens next will be crucial for his career. Perhaps he has had his head turned by the prospect of a big move elsewhere, but the indiscipline is increasing and he will not progress as he should if that continues.

Alli scores goals, has the energy and power to run from deep and already has a track record for delivering in the Premier League. But at some point, he has to take the next step and produce as regularly as De Bruyne does for Man City.

He too was headstrong as a youngster, as Mourinho discovered, but look at him now: De Bruyne does not allow his game to be overshadowed by petulance and indiscipline. Given that, Alli could do worse than modelling his game on the man he attempted to kick out of one on Saturday.