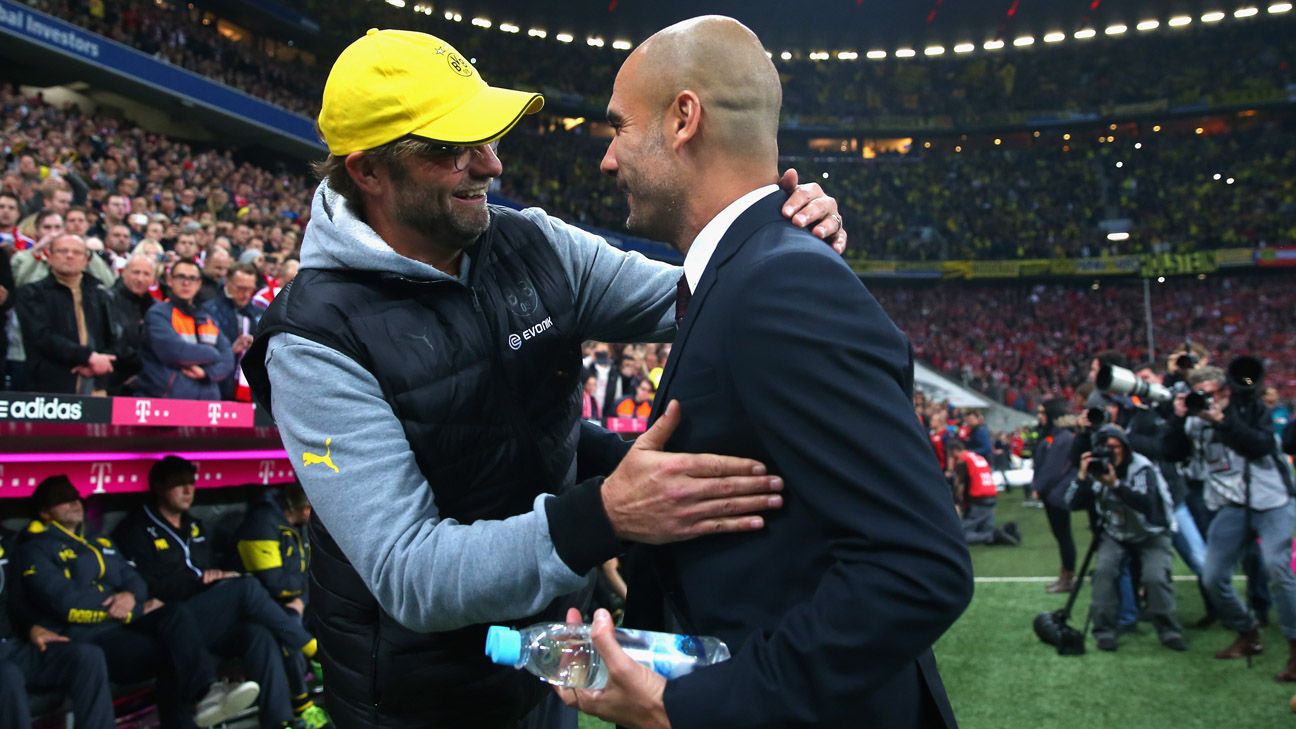 No manager who has managed more than 10 matches against Guardiola has a better record than Klopp, with the German boss winning six of their 12 meetings — a superior record than such luminaries as Jose Mourinho.

Klopp and Guardiola’s rivalry started in the Bundesliga — at Borussia Dortmund and Bayern Munich respectively — and has been renewed in the Premier League with their contrasting styles almost always producing fireworks on the pitch.

Here is the pair’s head-to-head record, which Klopp leads 6-5-1 over Guardiola after his most recent win in the rivalry.

Jürgen Klopp improves to 6-5-1 in head-to-head meetings with Pep Guardiola.

The 6 losses vs Klopp are Guardiola’s most vs any manager. pic.twitter.com/c32NyYF4MA

Guardiola, fresh from his post-Barcelona break in New York, arrived at Bayern with high expectations but his new side came up short in his first competitive game. Dortmund’s Marco Reus scored a brace and an own goal from Daniel Van Buyten and an Ilkay Gundogan strike saw Klopp’s men avenge their Champions League final defeat three months earlier. First blood to Klopp.

With Bayern four points clear at the top of the Bundesliga, Guardiola’s side arrived at the Westfalenstadion with all eyes on Mario Gotze. After his £31.5 million move from Dortmund to Bayern, Gotze played the pantomime villain, receiving jeers so bad from the yellow wall that he ended up warming up in the tunnel. However, he had the last laugh, opening the scoring early in the second half. He refused to celebrate, but late goals from Arjen Robben and Thomas Muller wrapped up Bayern’s first league victory over Dortmund in seven meetings since February 2010.

More transfer controversy between these two sides preceded their meeting in Munich, with Robert Lewandowski announcing in January that he would move to Bayern at the end of his Dortmund contract. Lewandowski was benched against his future side, but Dortmund came out 3-0 winners at the Allianz Arena with goals from Henrikh Mkhitaryan, Marco Reus and Jonas Hofmann. It marked the first time since November 2011 that Bayern had suffered back-to-back defeats. Tensions boiled over, with Rafinha sent off for putting a hand in Mkhitaryan’s face. Guardiola’s side had already secured the Bundesliga title, but a sorry episode nevertheless.

In the time before goal-line technology, controversy ensued in the 64th minute of the German cup final when Mats Hummels’ flick-on was headed goalward by Lewandowski. Dante cleared, but replays showed the ball had narrowly crossed the line — though they also showed Hummels was offside. Both were missed by the officials, and the game remained goalless until Robben found the target in the second half of extra-time, while Thomas Muller struck with the final kick of the game to secure a domestic league and cup double for Guardiola in his first season.

Lewandowski lined up against his former club at the first time of asking, but it was not a happy reunion for the Poland striker as he saw Dortmund beat Bayern to the Supercup for the second straight season. Mhkitaryan and Pierre-Emerick Aubameyang’s goals enough to hand Klopp a third win over Guardiola.

Klopp’s side were injury ravaged when they visited the Allianz Arena, but they took the lead through Reus only for Lewandowski to equalise before Robben converted from the spot to secure victory. The result saw Dortmund, seen as the only team in the Bundesliga who could possibly challenge Bayern for the title, drop into the bottom three as Klopp continued to suffer a horrendous final season in charge.

Lewandowski added to Klopp’s woes, scoring the winner on his first Bundesliga return to Dortmund. A short while after this defeat, Klopp announced that he would leave Dortmund at the end of the season, guiding the club to an eventual seventh placed finish in the league, while Guardiola secured his second straight Bundesliga title.

In their final clash in Germany, Klopp’s Dortmund stunned Guardiola’s Bayern to reach to cup final on penalties. Lewandowski scored for the third successive game against his former club before Aubameyang equalised, and in the shootout, Philipp Lahm, Xabi Alonso, Mario Gotze and Manuel Neuer all missed to hand Dortmund victory. Klopp’s reign ended on a low, however, as they lost the final to Wolfsburg.

After a post-Dortmund break, Klopp replaced Brendan Rodgers at Liverpool. The following season, Guardiola joined him in England when he took charge of Manchester City. In their first Premier League meeting, Georginio Wijnaldum’s eighth-minute strike at Anfield gave Klopp the perfect ending to the year. The result put Liverpool four points ahead of City in second — the first, and only time, Klopp has ended a calendar year ahead of Guardiola in the league. However, they were still six points behind leaders Chelsea.

Liverpool had dropped off the pace by the time the two teams met at the Etihad. City Tottenham were both ahead of Liverpool at this point with the Reds’s hopes for the title all but over. Still, it was a thrilling match in the only league contest between Klopp and Guardiola to end in a draw. James Milner scored from the spot against his former club to hand Liverpool the lead before Sergio Aguero pegged them back, but both sides missed golden opportunities to win the game, with Aguero and De Bruyne squandering chances before Adam Lallana produced a miss of the season contender in injury time, somehow scuffing Roberto Firmino’s ball into the box when it looked easier to score.

It was a horror show from Liverpool after the international break. Coming off a 4-0 victory against Arsenal, Liverpool’s defence were all over the place as City romped to victory in a result that took Guardiola’s men top of the Premier League. Mohamed Salah missed a great chance early on and then at 1-0 down Sadio Mane clattered City goalkeeper Ederson as they both chased down a bouncing ball. Mane caught Ederson in the face with his boot as the City keeper attempted to head the ball away, and referee Jon Moss showed no hesitation in brandishing a red card. From there on in, it was one way traffic — Klopp’s decision to swap to a back three not helping matters at all.

A Premier League classic as City’s chances of emulating Arsenal’s 2003-04 “Invincibles” were crushed. City, 15 points clear at the top of the table, conceded early, Alex Oxlade-Chamberlain beating Ederson with a low driven shot. Leroy Sane capitalised on an error from Loris Karius to level the scores before half-time. After the break, nine emphatic minutes brought brilliant goals from Firmino, Mane and Salah to stun Guardiola and City. Late goals from Bernardo Silva and Gundogan ramped up the tension, but a late Aguero miss saw City’s 33-game unbeaten run come to a crushing end.