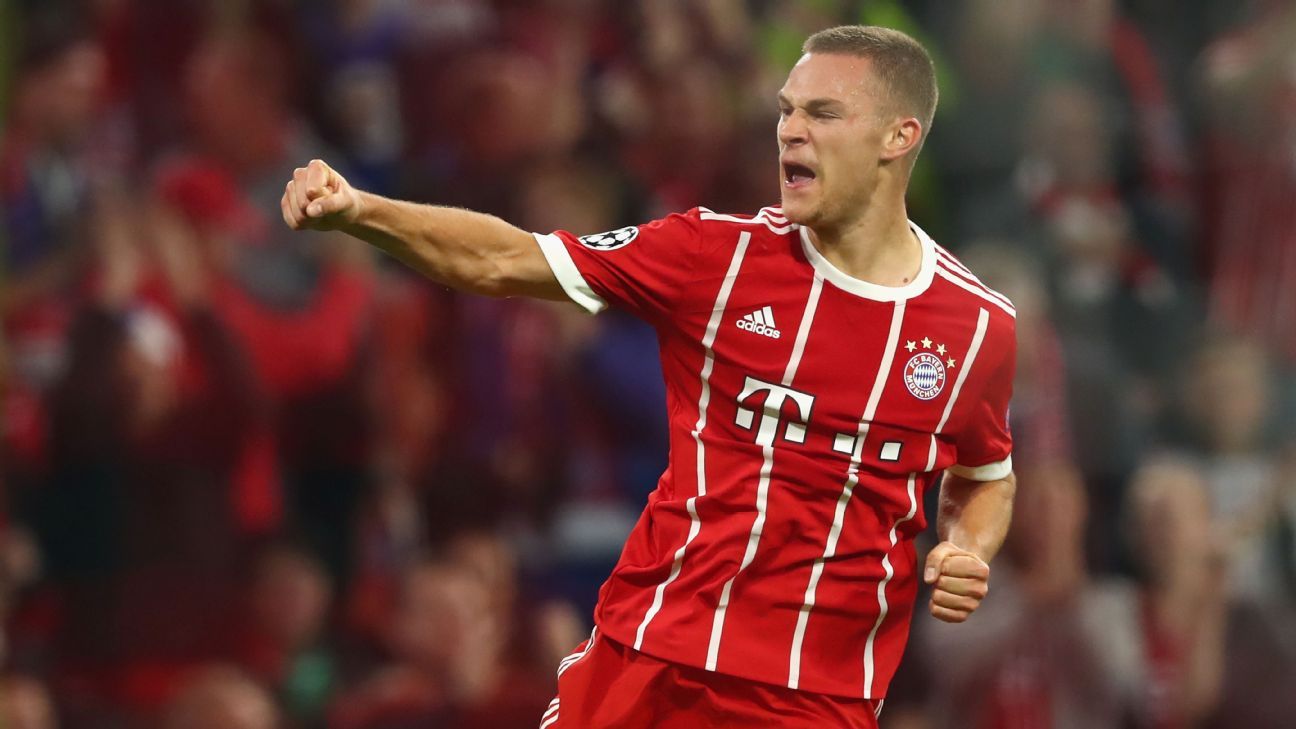 
MUNICH, Germany — Joshua Kimmich’s involvement in the 1-0 away win at Hamburger SV on Saturday is best summed up as “flawless but marginal.” The 22-year-old Bayern Munich right-back featured only as a 10-second substitute at the Volksparkstadion and never once touched the ball.

He clearly didn’t mind. Sitting in the club canteen at Sabener Strasse the next morning, Kimmich smiled and joked about his micro-appearance.

Since veteran coach Jupp Heynckes took over the team following the dismissal of Carlo Ancelotti in late September, the mood inside the club has markedly lifted, helped by three largely routine wins on the trot (5-0 vs. SC Freiburg, 3-0 vs. Celtic and the narrow success at a spirited HSV). Like most players, Kimmich immediately benefitted from the combination of order, calmness and tactical dedication that Heynckes, 72, reinstalled in the Bavarian capital. But in truth, the player’s sharp improvement in form predates the veteran coach’s fourth spell in charge of the German champions.

The former RB Leipzig trainee has easily been Bayern’s most impressive and most consistent servant throughout this testing season, starting and finishing every game (before that abridged SV outing) while scoring three goals, providing four assists and creating more chances (25) than anyone else in the league. Bayern Executive Chairman Karl-Heinz Rummenigge wasn’t exaggerating when he recently declared that Kimmich was “further along at his age than Philipp Lahm was at the time.” (The recently retired captain and World Cup winner had played only a handful of matches for Bayern by November 2005, following a loan to Stuttgart and a serious knee injury.)

Kimmich accepts such plaudits with reluctance. “It’s not easy to speak about your own performances,” he said, “but I’m very happy that I’ve played every minute so far this season, yesterday aside. The season before, I didn’t play so often, and I didn’t play in the important games. Now I do, and I want to pay back [the trust] with good performances.”

One can still sense the frustration Kimmich felt during the 2016-17 season, when Lahm was firmly ensconced on the right side of defence and Ancelotti found little space for the young Germany international in the centre. After a breakthrough campaign under Pep Guardiola, who played Kimmich as either a midfielder or a centre-back, as well as his starting role as right-back for Germany at Euro 2016, Kimmich found himself with the reserves, treading water. He had half-anticipated a set-back — “as a young player, you can’t always have positives” — but got so impatient toward the end of the campaign that sources close to him hinted at his possible departure.

A line by Guardiola in praise of the player’s remarkable versatility (“with this boy, you can go anywhere”) suddenly sounded like a threat: Kimmich had so many options to go abroad that the prospect of spending another year on the sideline at the Alianz Arena was distinctly unappealing.

While he insists that the thought of leaving Munich “never” entered his mind, the Bayern board were sufficiently worried to make their wishes known to Ancelotti: Kimmich had to play on the right side of defence. Ancelotti agreed, and once restored to the starting XI, Kimmich duly played with the kind of verve and power that few of the more established names could muster, even if it wasn’t quite enough to save Ancelotti’s job.

Kimmich won’t say a bad word about the recently departed 57-year-old. Asked to comment on Rummenigge’s recent assertion that “the coach and the team didn’t quite fit together,” he diplomatically replied that Rummenigge was better placed to answer that question and maintained that “we had a lot of good games in the past [under Ancelotti]” before results took a turn for the worse this season.

“It’s normal in football that there’s sometimes a change [when you don’t win].”

Nevertheless, it’s telling that Kimmich described the training regime under Heynckes as “very focussed” and full of “intensity.” Some Bayern players had privately complained to the bosses that Ancelotti’s sessions were a bit too relaxed.

With the 2013 treble winner back in charge as an emergency care-taker, Kimmich is confident that the tide has turned. Bayern have yet to reach anywhere near the levels they showed before Heynckes’ retirement and during the Guardiola years, but there are at least clear signs of improvement. There’s more emphasis on structured wing play, for example. Kimmich and Arjen Robben, the duo on the right, look almost as exciting as a double act as Lahm and Robben had done in their pomp.

Now, by a quirk of the fixture calendar, Kimmich’s former club now stand in the way of a full-blown Bavarian renaissance. Third-placed Leipzig will host Bayern in the second round of the DFB Pokal on Wednesday night and then travel to Munich for a Bundesliga showdown on Saturday. Both games will tell us a lot about the resilience of the Heynckes bounce and the progress of Leipzig, who weathered a tricky start of their own to find a rich vein of form in recent weeks. “These are two very important games for us,” Kimmich said.

When he last travelled to Saxony at the tail end of last season, Kimmich met up with his former flat-mates Yussuf Poulsen and Diego Demme in the Bayern team hotel before the match. It’s hard to imagine that Heynckes, a stickler for discipline, will allow a similar rendezvous ahead of the weekend’s kickoff. The rising Bayern star and his former colleagues will have to reacquaint themselves on the pitch instead, but based on his superlative showings so far, Kimmich might well enjoy the visit more than they will.