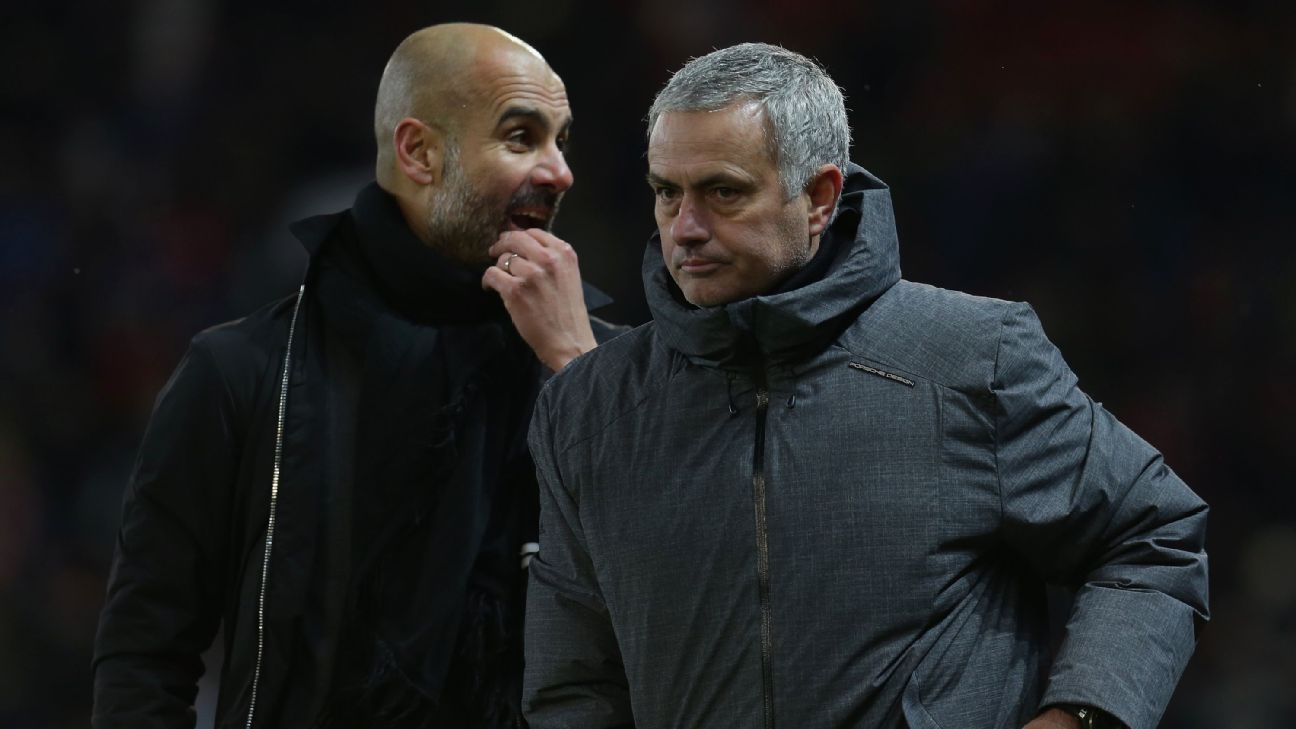 
Irrelevance is not a word you generally associate with Jose Mourinho or Pep Guardiola, especially when two of the world’s most celebrated coaches go head-to-head, but more than 10 years after their rivalry erupted on the touchlines of Madrid and Barcelona, have we now approached the moment when Jose vs. Pep doesn’t matter?

The two will meet for the 23rd time as head coaches on Sunday — Guardiola leads 10-7, with six draws — when Tottenham host Manchester City and both men are sharing a downward trajectory for the first time.

Some might argue that 2016-17, their first season as rivals in Manchester, was a low point, but although United and City slugged it out for fourth place in the Premier League, Mourinho guided United to the EFL Cup and Europa League and Guardiola was laying foundations for a record-breaking City side.

They were still the biggest names in the game, even if the hostility of their time as direct rivals in Spain with Real Madrid and Barcelona had been dialled down. And whenever a Mourinho team faced a Guardiola side, it mattered because it was a game that would have a direct impact on something tangible — a title race, a cup tie or even, as in that first year at Manchester, a place in the Champions League.

But this latest clash will feel like an encounter between two men, and teams, who don’t know where they are heading. City go into the weekend an incredible 19 points behind leaders Liverpool, with their hopes of winning a third successive title over save for an unprecedented collapse by Jurgen Klopp’s team. And Spurs, having appointed Mourinho following the sacking of Mauricio Pochettino in November, sit in sixth position, six points adrift of the top four less than a year after reaching their first Champions League final.

Having just guided City to a third successive EFL Cup final and with his team still in the FA Cup and Champions League, Guardiola is on course to win more silverware. But the emergence of Liverpool under Klopp over the past two years has now placed Guardiola and his City team in the shade. That is reflected in ESPN’s FC 100, where Klopp and Guardiola at No. 1 and No. 2 respectively (Mourinho, having spent much of 2019 out of work, has slipped out of the top 10).

Liverpool won the Champions League last season and are on course to win the Premier League title this time around. The point of reference in English and European football is Klopp’s Liverpool, and Guardiola must find a way to haul the pendulum back.

As for Mourinho, it has been a while since he was in the conversation when it comes the big prizes. He has not won a Premier League since guiding Chelsea to the title in 2015 and his last Champions League win was a decade ago, when Inter beat Louis van Gaal’s Bayern Munich in the 2010 final.

Like Guardiola, Mourinho is still alive in the Champions League, with Spurs facing a tough round-of-16 tie against RB Leipzig next month, so he could yet roll back the years by winning the tournament for a third time this season. But he is firmly in the underdog bracket in terms of winning club football’s biggest prize, so don’t spend too much time contemplating the Portuguese celebrating glory in Istanbul come May.

His challenge now is all about proving he still has what it takes, at 57, to become a major force in the game again at Tottenham. Spurs are ambitious, with a world-class stadium and players the envy of the best clubs, but Mourinho does not have the riches he had at Chelsea or Real Madrid or the historical power that comes with managing a club like Man United or Inter.

Guardiola has much more in his favour because City will always back their manager with substantial funds in the transfer market, but the question over Guardiola is whether he possesses the drive to build again at the Etihad Stadium. At Barcelona and Bayern Munich, his intensity led to exhaustion and he will need all the energy and inspiration he can find to overhaul Liverpool and Klopp.

The hunters have become the hunted, years after Mourinho reeled in Arsene Wenger and Sir Alex Ferguson when he arrived as a new coaching superstar at Chelsea in 2004, just before Guardiola did the same to Ferguson in the Champions League and Mourinho in Spain.

Sunday’s subplot is two men searching for a way back to the top. Never before has there been so much doubt and insecurity between them on the touchline.