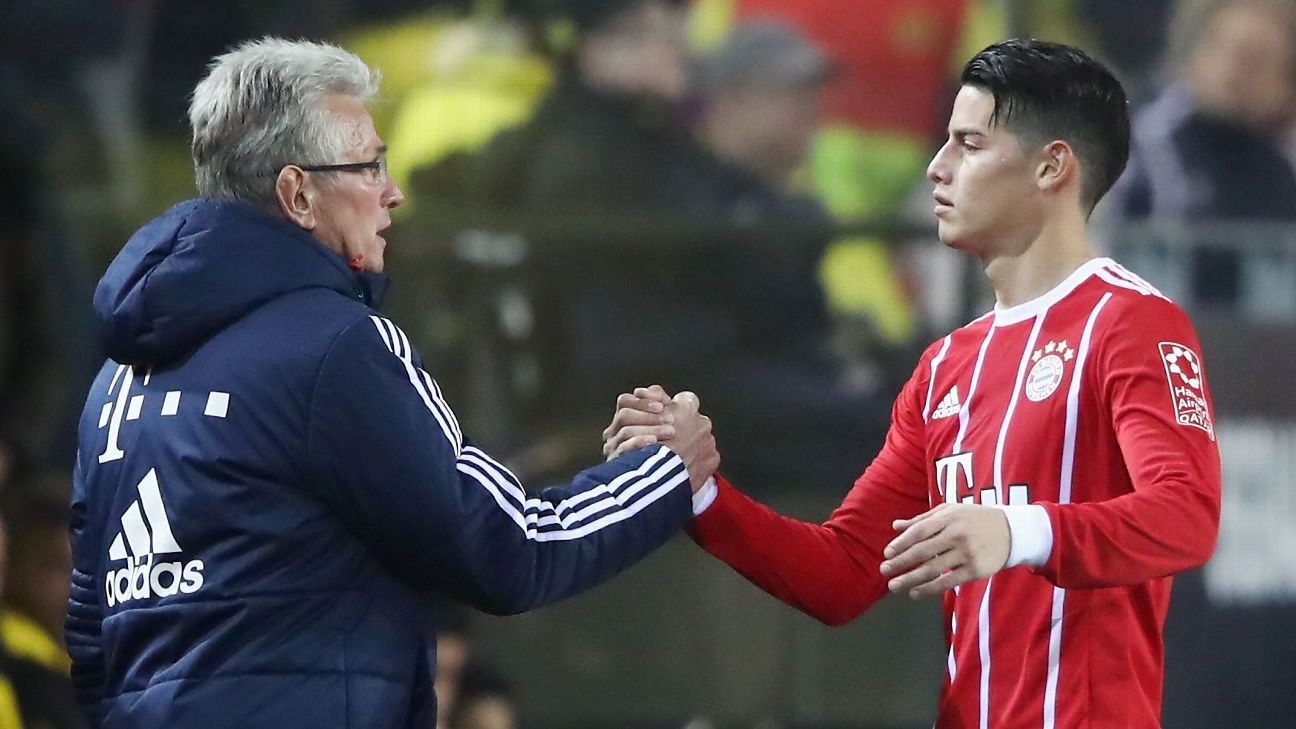 
Facing an uncertain future after the shock exit of Carlo Ancelotti, James Rodriguez has become a mainstay for treble-seeking Jupp Heynckes at Bayern Munich.

Lured to Bayern by Ancelotti, his former coach at Real, Rodriguez signed a two-year loan deal last summer — with the Bavarians securing the option to make the deal permanent from Real Madrid in 2019.

However, he made a rocky start to life in Germany under his old mentor’s tutelage. The Colombia international picked up a hamstring injury in Bayern’s preseason Audi Cup defeat to Liverpool on Aug. 1, meaning a long wait for his competitive debut as a substitute in the 2-0 loss at Hoffenheim on Sept .9 — incidentally, Bayern’s only defeat in the Bundesliga this season under the Italian.

He was hooked by Ancelotti at half time in the embarrassing 3-0 defeat at Paris Saint-Germain later that month. The thumping loss spelled the end for the Italian and amid reports of dressing room unrest, Ancelotti was shown the door the next day.

Heynckes, in a shock move by the Bayern hierarchy, arrived at the start of October. Speaking at his unveiling as Bayern coach for a fourth term, Heynckes highlighted the problems the Colombia star was encountering at the time: “James Rodriguez doesn’t speak German. German football is very different to football in South America. It is a very difficult situation for a young player.

“However, he should know that he can count on my support and my help because I like technically gifted players. And I believe he has a lot of talent.”

Undoubtedly, communication has been the key to Heynckes turning around James’ flagging fortunes.

A fluent Spanish speaker, formerly of Bilbao, Tenerife and Real Madrid, Heynckes can speak the player’s language. It’s also no surprise that the likes of Javi Martinez and Arturo Vidal have also returned to top form under the man known as “Don Jupp.”

Rodriguez’s left foot is a tremendous weapon to have in the armoury and his corners are always dangerous. More evidence promptly came last Sunday as he provided two delightful second half assists as Bayern came from behind to beat lowly Werder Bremen 4-2.

Robert Lewandowski headed home from a fierce Rodriguez corner before Thomas Muller grabbed his 100th league goal after a cute pass as Bayern stretched their lead to 16 points at the top of the Bundesliga.

Heynckes hailed the Colombia international’s contribution since arriving in the summer, but believes even better things are ahead.

“Overall, James has developed very well at Bayern,” he said.

“He has not only become a regular in the team but also provides impetus to our play. Not only that, he is ready to fight and run for the team. He has fantasy and is an amazing player. Today he was very good but he can play even better.”

Thanks to Rodriguez’s magical left-foot, Bayern are now a serious danger from set pieces — a threat that had been disregarded a little since the days of Pep Guardiola. A total of 14 of Bayern’s 44 league goals this season have come from set plays — almost 32 percent, their highest percentage in six years — since Heynckes last spell in charge.

Rodriguez has scored three goals and provided six assists in 11 Bundesliga starts and has featured in every Champions League game too. His magnificent delivery for Corentin Tolisso’s header in the 3-1 revenge against PSG last month was a thing of beauty.

Deemed surplus to requirements at Real, Ancelotti’s final signing is looking an inspired piece of business by the treble-seeking Bavarians.