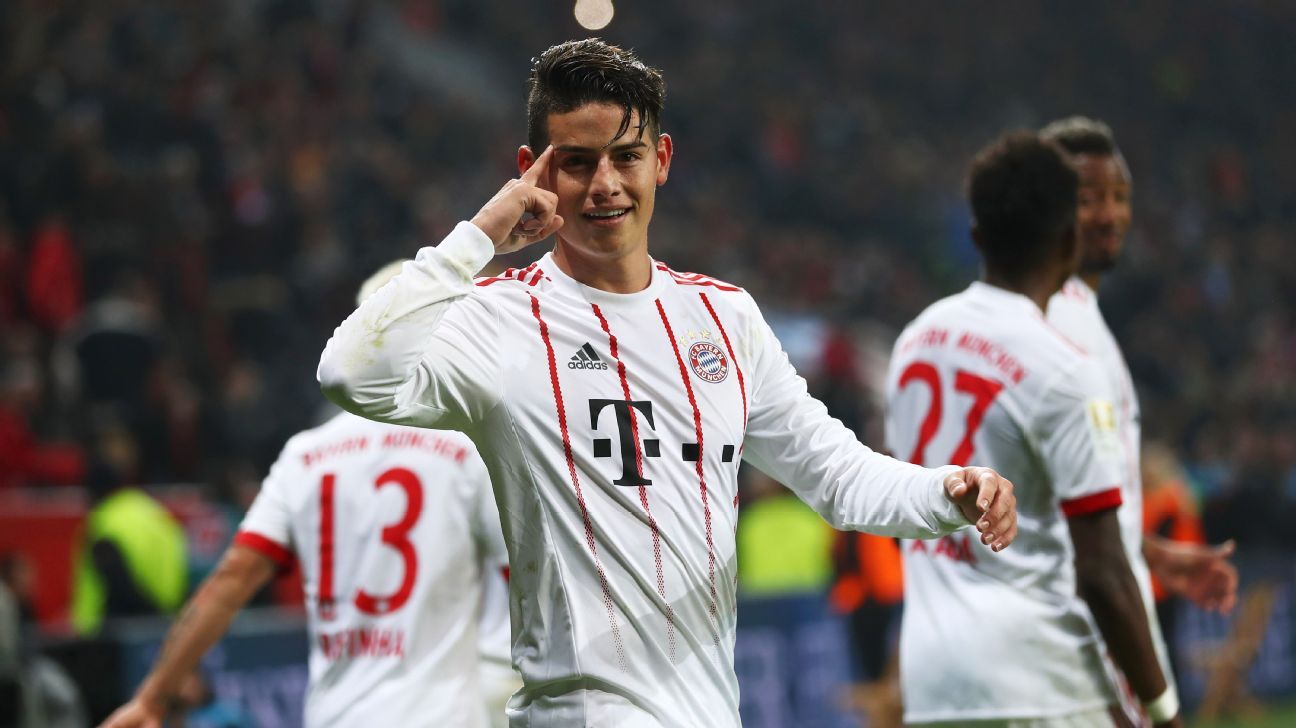 
Returning to Bundesliga action after winter hibernation, Bayern Munich stretched their advantage at the top to 14 points with a 3-1 win at Bayer Leverkusen, courtesy of goals from Javi Martinez, Franck Ribery and James Rodriguez. Kevin Volland’s deflected shot on 71 minutes proved no more than a consolation for the home side.

Bayern’s sixth-consecutive Bundesliga title looks a mere formality, starting as they mean to go on after the winter break and ending Leverkusen’s 12 game unbeaten run with the mercurial Ribery notching his first league goal of the season.

Bayern made heavy weather of it after going 2-0 up and would have been dragged level if not for a brilliant saving tackle by Jerome Boateng.

8 — Delivered a first league win in Leverkusen since the last time he visited as Bayern coach back in 2013. Missing two of his best players in Mats Hummels and Robert Lewandowski, victory will be very sweet against the side Heynckes coached between 2009-11.

GK Sven Ulreich, 7 — Hardly tested but when called upon Bayern’s player of the month for December fulfilled his tasks with authority.

DF David Alaba, 7 — Teamed up with Ribery on the left-hand side as he has done for much of the last decade. Caught the eye more in the first half before concentrating on defence late on.

DF Niklas Sule, 6 — Replaced his Germany teammate Hummels in the starting XI and headed narrowly wide from a corner as Bayern repeatedly exposed Leverkusen’s Achilles’ heel from set pieces. Sule had his problems against the pace of Leon Bailey but it’s all part of the learning curve.

DF Rafinha, 6 — A valuable squad member who continues to prove his versatility, filling in at right-back for Joshua Kimmich. However, the Brazil international can offer little of the German Wunderkind’s attacking verve and forward surges. After seeing yellow for a clumsy foul on Julian Brandt on the stroke of half-time, Rafinha did well to escape further censure.

MF Javi Martinez, 7 — Brilliant in the first half, crowned as he rammed home the opener from a corner after 32 minutes. He followed up with a bullet header which fizzed narrowly wide five minutes later. He fizzled out in the second half, with some uncustomary lapses and gave away the ball too often.

MF Arturo Vidal, 7 — Full of purpose against his former employer where he spent four years between 2007-11. Always a threat from corners, playing his part in the opening goal scramble before Martinez bundled the ball home.

MF Franck Ribery, 7 — Largely anonymous before coming to life on the hour mark, dispatching a sure finish to double Bayern’s lead and notch a precious his first goal of the season in his 10th Bundesliga game. Good timing from Ribery with his contract up in the summer and the former France international saying he’d like to finish his career in Bavaria.

MF James Rodriguez, 9 — At the heart of Bayern’s best work throughout, setting up Ribery’s goal with an intuitive first-time pass and curling in a delightful free kick in added time to secure the three points. James is proving an excellent acquisition by the departed Carlo Ancelotti.

MF Arjen Robben, 5 — One of his quietest ever games in a Bayern shirt as the Dutch master slowly builds up to full fitness after another injury enforced absence.

MF Thomas Muller, 6 — Bayern’s captain toiled feverishly with little end product and picked up a harsh yellow card for a foul on Volland in his own penalty box.

MF Kingsley Coman, 6 — Equally as quiet as the man he replaced Robben.

FW Sandro Wagner, N/R — Replaced Ribery with 11 minutes remaining for his first game in a Bayern shirt game since appearing as a 19-year-old over 10 years ago for Bayern Munich.