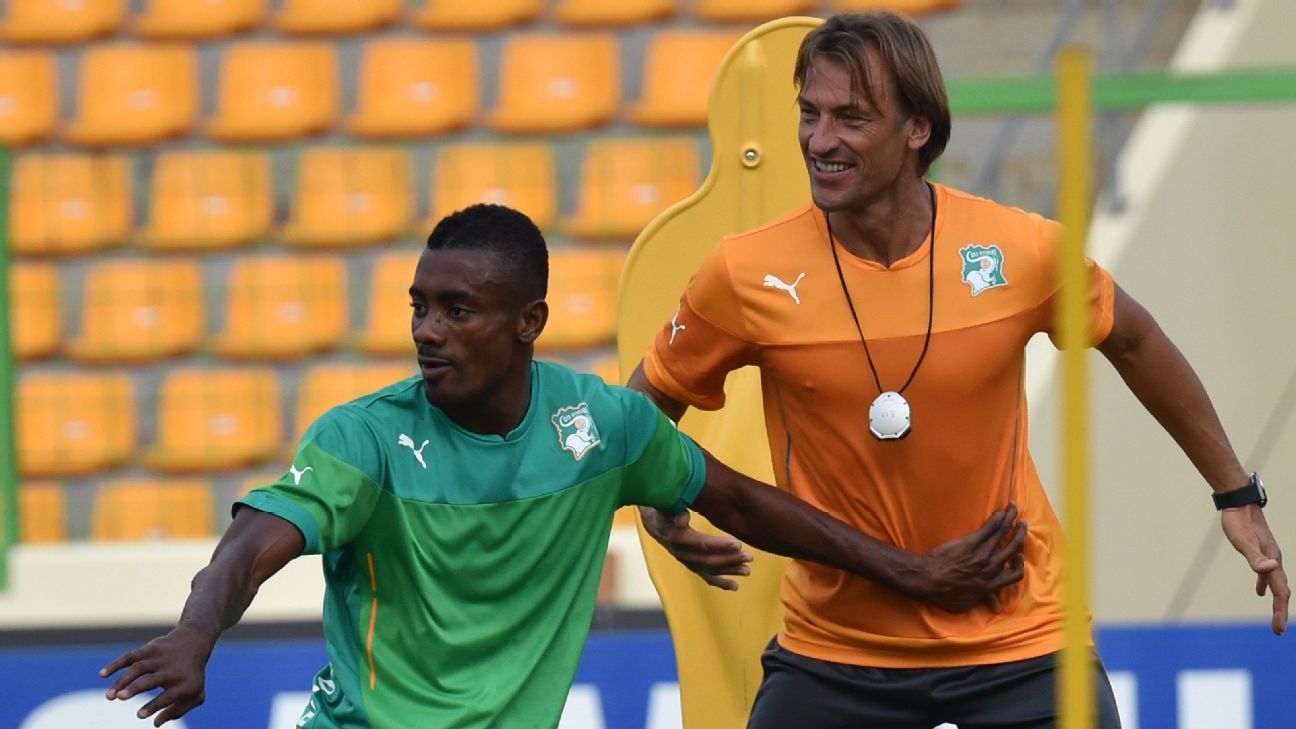 
Ivory Coast forward Salomon Kalou has told ESPN FC he sees Morocco coach Herve Renard as being “a bit like [Jose] Mourinho” in the way he is trying to use mind games ahead of next month’s crucial World Cup qualifier between the two nations.

A goalless draw with Mali earlier this month left Ivory Coast in need of three points in their final World Cup qualifier against Morocco at the Stade Felix Houphouet-Boigny in Abidjan.

Kalou scored decisive goals in the tense two-legged playoff over Senegal in 2013 that Ivory Coast won 4-2 on aggregate to qualify for the last World Cup in Brazil. Renard was appointed coach of The Elephants after that tournament, and the following year led Kalou and Co. to a long-awaited second triumph in the African Nations Cup.

Kalou moved to Chelsea in 2006, during Jose Mourinho’s first spell in charge at Stamford Bridge, and the 32-year-old says he can see similarities between the two sides.

“It will be interesting [meeting Renard],” Kalou said of Morocco’s coach, who guided Ivory Coast to a first Africa Nations Cup trophy since 1992.

“He has a mental game going on. A bit like Mourinho. He will try to play this kind of game with us because he knows us very well. But I don’t think that will play a part. We have a good relationship with him, but we have to win.”

Ivory Coast have not scored in their last two meetings with Renard’s Morocco, picking up a point in a goalless draw in the reverse fixture in November 2016, and in early 2017 suffering a 1-0 defeat and elimination from the African Nations Cup.

Morocco have not played at a World Cup since the 1998 tournament in France, and Kalou praised his former boss for doing a “fantastic job” with the Atlas Lions. But, he added: “Hopefully, it won’t be against us.”

After Kalou retired from international football earlier in 2017, new Ivory Coast coach Marc Wilmots convinced him to return to try to help his country reach next summer’s finals in Russia.

Kalou, who has won his 100th cap since his return to the national team, once again hopes to provide the magic for Ivory Coast and score the decisive goal against Morocco next month.

“Everywhere I go, I try to score important goals because if you lose 4-2 and you score two goals, for me that’s not what I like,” he said. “When the team needs the point, I want to score. Or when we need it to go to the World Cup, score! That’s the kind of goal I really like.

“I already did it last World Cup. Scored the goal for Ivory Coast to go to the World Cup in Brazil. I hope, I wish that I can do it again.

“When you’ve already played two [World Cups], you want to play the third. It would complete my international career if I played Russia 2018.”

Following the World Cup campaign, which may or may not end in Abidjan in November, Kalou will focus on his club career and retire from international football.

“Yes. Definitely. I only came back to go to the World Cup,” he said, adding that his big dream remains to finally score a hat trick for his country after already keeping the match ball at Feyenoord, Chelsea, Lille and Hertha.

He said: “The only hat trick I haven’t done is with my country. That’s what I am looking forward to do.”

Transfer Talk – Barcelona lead Juventus in chase for Wolves’ Adama Traore
Liverpool boss Klopp clashes with Carragher over no Van Dijk replacement
Ruben Dias could fix Man City’s defensive woes despite being young for a central defender
Barcelona vs. Real Madrid clasico not just a football rivalry
Barcelona and Real Madrid have their issues, but who needs to win El Clasico more?