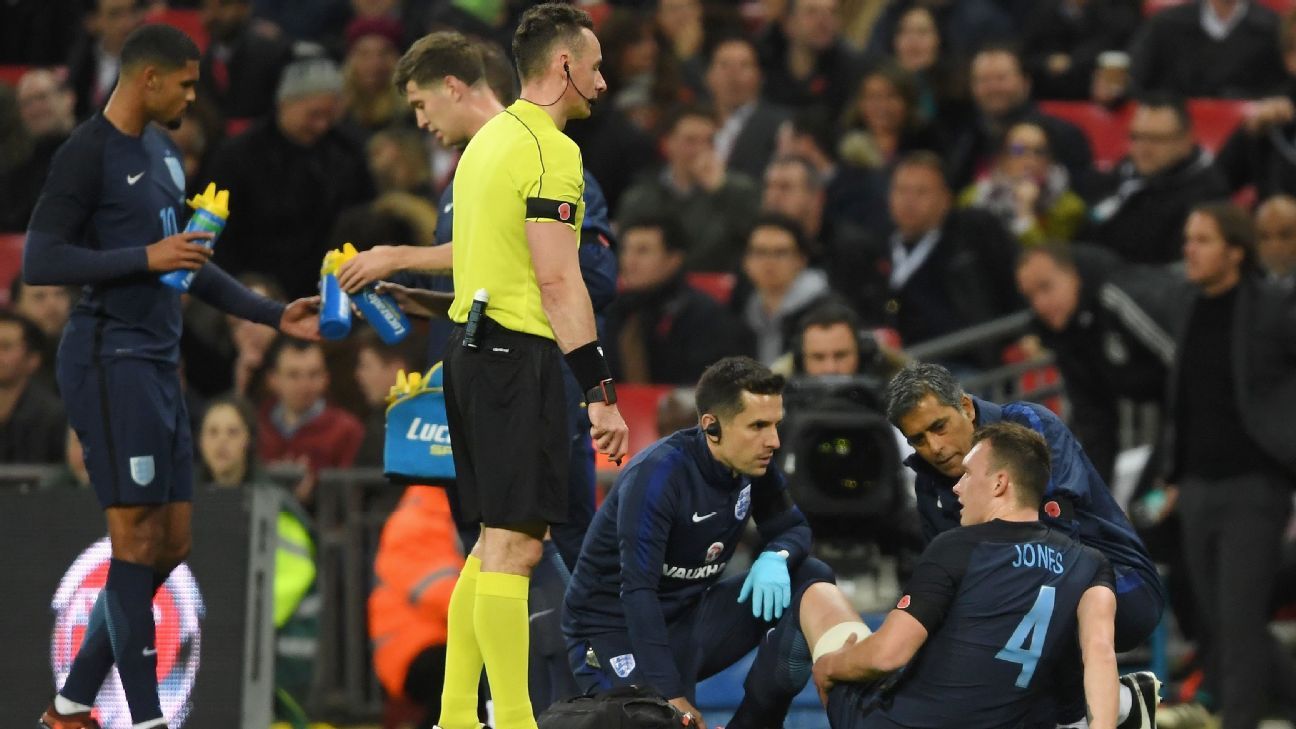 
Dominic Solanke, Lewis Cook and Angus Gunn have been drafted into the England squad for the first time after Phil Jones became the eighth player to withdraw from Gareth Southgate’s group.

World Cup preparations kicked off with a promising goalless draw against holders Germany at Wembley on Friday, with five-time champions Brazil providing the opposition on Tuesday.

Centre-back Jones will not be involved, however, after the centre-back was forced off midway through the first half against Germany and he has returned to Manchester United for treatment, leading Southgate to bolster his squad with three England Under-21 players.

Solanke, Cook and Gunn got the nod after helping Aidy Boothroyd’s Young Lions continue their unbeaten start to their Euro qualifying campaign with a 2-0 win over Ukraine.

Liverpool striker Solanke opened the scoring in Kiev, continuing the fine international form that saw him win the Golden Ball as England lifted the Under-20 World Cup in the summer. Bournemouth midfielder Cook skippered the side to glory in South Korea.

Goalkeeper Gunn, on loan from Manchester City at Norwich, comes in after Jack Butland broke his finger.

Demarai Gray and Dominic Calvert-Lewin had also been under consideration for experience.

Brazil offer England another chance to hone their three-man back line against elite opposition.

Chelsea’s Ruben Loftus-Cheek, currently on loan at Crystal Palace, was one of five players to make his debut against the world’s top-ranked side and produced a man-of-the match display.

Everton goalkeeper Jordan Pickford produced a string of fine saves on an impressive first senior appearance, but Joe Hart will be between the sticks against Brazil after Butland’s injury caused a rethink.

“It was just a straightforward goalkeeping drill, nothing out of the ordinary and just caught his finger awkwardly,” Southgate said.

“We would have played Jack in the game against Brazil. We were always going to play Jordan [on Friday night], but we’ll now play Joe on Tuesday.”

There will be able a temptation to play Loftus-Cheek again after a man-of-the-match debut that followed Harry Winks’ impressive bow in Lithuania last month.

The 21-year-old midfielders improve the options that Southgate was bemoaning just months ago.

Asked if the assured debuts of Loftus-Cheek and currently-injured Winks made him feel more positive about his options, the England boss said: “Yeah — and I think the slightly different system opens up different possibilities.

“In the position Ruben played [against Germany], you could play Dele [Alli] there, you could play [Adam] Lallana there, so that different sort of profile of midfield player with a deeper one behind.

“I think we need the stability of the three behind that at the moment, but also all of those guys at the back use the ball well.

“At times it was difficult for them to press us because of the composure we showed and the system we played, so I think it was a brilliant experience for our players.”

Harry Kane, Winks and Alli have withdrawn from this squad through injury, as have Raheem Sterling, Jordan Henderson and Fabian Delph.