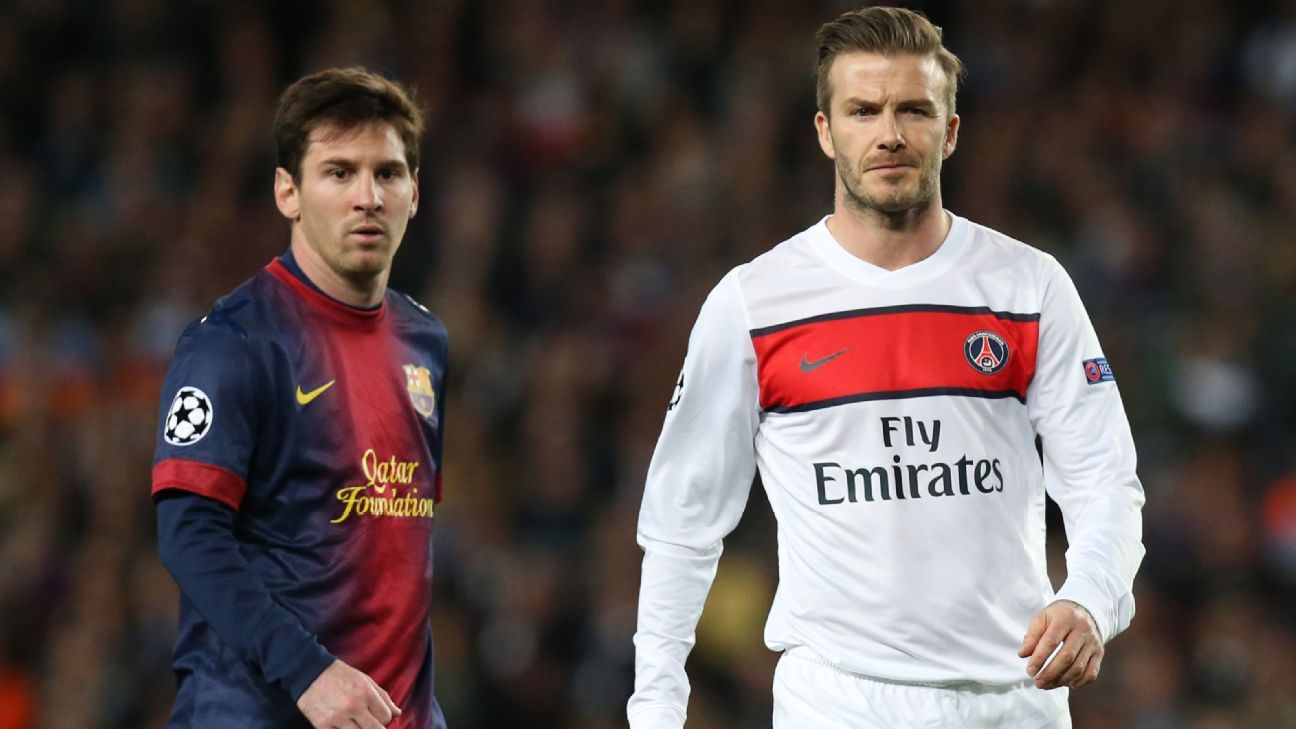 
Just 10 years ago, David Beckham ruled the roost as soccer’s wealthiest player year after year. By then he had already moved to LA Galaxy from Manchester United, but it was his collection of global endorsements that made sure his earnings outstripped anyone else.

Beckham had earnings of $40 million back then. Today it’s Lionel Messi who holds top spot on the Forbes rich list, ahead of arch-rival Cristiano Ronaldo. Things have moved on a bit, though, as the game’s modern superstars remarkably earn three times what Beckham brought in. In fact, Paris Saint-Germain duo Neymar and Kylian Mbappe also earn more now than Beckham did a decade ago.

So how has the rich list changed over the past decade?

He might be wading through a rough patch for the first time in his career, but Messi can perhaps still take heart in the fact he remains the highest-paid footballer.

With accumulated club salary and commercial endorsement deals taken into account, Messi has accrued an income of $126m, beating Ronaldo into second place on $117m for the third consecutive year. The last time Ronaldo out-earned his eternal rival — according to Forbes — was back in 2017.

The soccer stars have got some way to go to catch the world’s highest-earning athlete across all sports. Swiss tennis star Roger Federer raked in $212.6m via his combined winnings, salaries, endorsements and commissions over the past 12 months. Wow!

Concentrating solely on football, the latest list is similar to last year’s. Indeed, Messi, Ronaldo and Neymar have occupied the top three for the past four years, ever since Neymar bumped Zlatan Ibrahimovic off the podium in 2017.

Unsurprisingly, Mbappe is the highest climber since last year after successfully increasing his annual income from $30.6m in 2019 to $42m in 2020, launching the PSG prodigy up from seventh spot to fourth. We can only imagine Mbappe will continue to redress the balance when his current deal expires in 2022 and the race to procure his formidable services begins anew.

Several names have tumbled out of the Top 10, with the likes of Alexis Sanchez, Mesut Ozil, Oscar and Andres Iniesta all slipping down the ladder to be replaced by Mohamed Salah, Robert Lewandowski and David de Gea.

Antoine Griezmann‘s big move to Barcelona may be yet to pay dividends on the pitch, but the French forward’s bumper contract at the Camp Nou has seen him move up.

Paul Pogba has also consolidated his place in the Top 10 though the rise of Mbappe and Salah have seen the Manchester United man slip from being the fourth-highest paid player in the world in 2019 to 16th.

De Gea’s gargantuan contract renewal also saw him become the highest-paid goalkeeper of all time and the first stopper to crack the Forbes Top 10.

Meanwhile, Gareth Bale is remarkably back inside the 2020 Top 10 despite seeing his tenure at Real Madrid hit the buffers in recent seasons. Not bad for sitting on the bench.

Former Top 10 mainstays such as Wayne Rooney, James Rodriguez, Radamel Falcao, Ibrahimovic and Sergio Aguero have all fallen from the upper echelons as they all inevitably move toward the end of their playing careers.

With his Manchester United career quickly turning sour, Sanchez has surely also seen the most lucrative period of his career come and go, with the Chilean international breaking into the Top 10 in 2019 only to fall straight back out the following year.

Real Madrid boasted three players in the 2015 edition of the Forbes highest-earner list in Ronaldo, Bale and James (riding high and fresh from his heroics at the 2014 World Cup).

Somewhat at odds with Los Blancos‘ big-spending reputation, Bale is the club’s only representative in the 2020 Top 10. Perhaps they learned a valuable lesson at some point in the interim?

It’s 2015 that signals the start of Ibrahimovic’s slide down the pecking order, with his considerable PSG pay packet landing him third on the list.

Come 2016’s edition, Zlatan was still nestled just in behind Ronaldo and Messi but the following year — the season he left Paris for Manchester United — the Swedish striker was usurped by Neymar and Bale and bumped down into fifth place overall.

Rooney never cracked the top three during his heyday, but the England striker rode high in the Top 10 for many years, beginning in 2011 when he was seventh with an income of $20m.

It’s all a far cry from 2010, when LA Galaxy and MLS marquee signing Beckham topped the Forbes rich list with a total income of $40m.

The most commercially viable player in the world at the time, Beckham topped the Forbes listing in 2010, 2011, 2012 and 2013 before retiring (aged 38) later that same year after returning to Europe from MLS for a single-season fling with PSG.

La Liga and the Premier League dominated the landscape with eight of the top 10 earning players hailing from either the Spanish or English top flight — the outliers being Beckham and Ronaldinho, then of AC Milan.

Poised to take the entire game by storm having now firmly established his place in the Barca first team, the emergent Messi already found himself in sixth spot, quickly powering up to third place the following year (2011).

It’s worth noting that several players in the 2010 Top 10 earned a mere fraction of what today’s big names are raking in, with Steven Gerrard‘s yearly income of $15m unlikely to warrant a mention in the 2020 standings.

Funnily enough, despite it being a full decade ago and the Top 10 being chock full of established superstar names, Ronaldo’s annual income still put him up in second spot — a position he hasn’t slipped below since.

Professional football: Nice work if you can get it!