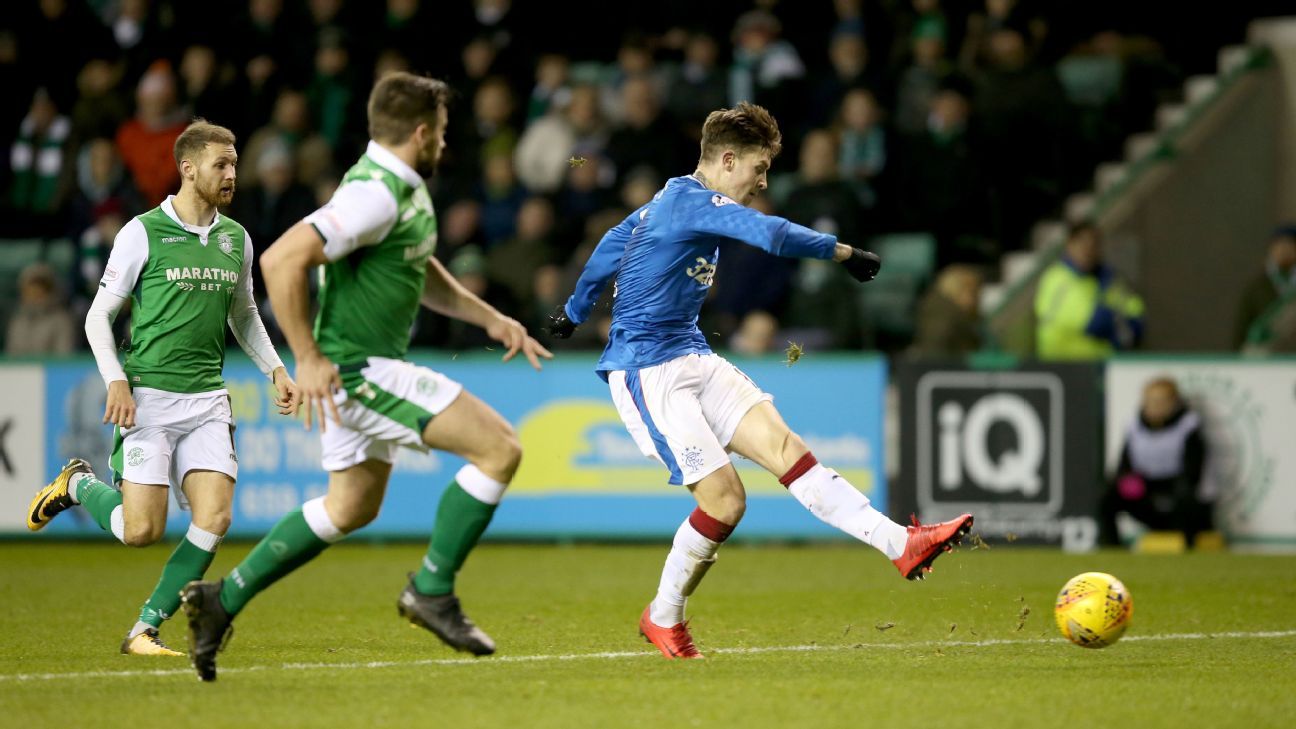 Graeme Murty further boosted his chances of landing the Rangers job permanently by masterminding another gritty 2-1 win over Hibernian at Easter Road.

Yet his team had to come from behind after Lewis Stevenson put Hibs ahead early with a deflected opener.

Josh Windass levelled with his fifth goal in eight games before Alfredo Morelos scored the goal which keeps Gers in second, six points ahead of the fourth-placed Leith outfit, who were unlucky to see substitute Brandon Barker twice denied by the post.

Murty — whose second stint as interim boss will continue until at least the end of the month — now has six wins from eight games in charge this term and he is looking increasingly like the man to steady the Ibrox ship.

The hosts looked determined to make the most of Martin Boyle’s pace down the right early on but the ninth-minute opener came from the opposite flank.

Left-back Stevenson released Simon Murray into the box from deep before carrying on his run as Bruno Alves failed to get tight enough to the Hibs striker. When Murray cut the ball back for Stevenson on the edge of the box, Gers’ Portuguese centre-back was forced to lunge in but only managed to divert the ball past goalkeeper Wes Foderingham.

Rangers should have levelled midway through the half, only for Morelos to somehow miss the target from three yards after being presented with a free header from Declan John’s back-post corner.

And they had to be bailed out by Foderingham when John failed to cut out Oli Shaw’s pass to Boyle.

Having been outplayed for most of the opening 42 minutes, though, Gers suddenly found themselves ahead at the break.

Their equaliser came as Daniel Candeias got lucky with the break of the ball. Jason Holt did not hang about and quickly sent Windass scampering through and he finished brilliantly into the far corner.

If Ofir Marciano’s part in Rangers’ first was questionable, he was undoubtedly to blame for their second.

With the clock into stoppage-time, Holt, Candeias and Jamie Barjonas combined to slice through the Hibs midfield. Morelos did not appear to be in a shooting position as he collected out wide but tied Paul Hanlon in knots before beating Marciano at the near-post as the keeper dived the wrong way.

Rangers got lucky again just moments after the restart as Murray failed to apply a finish to another quality Boyle delivery, while at the other end Morelos fluffed another header as he failed to bury a James Tavernier cross.

But Hibs continued to apply pressure, with Barker foiled by the woodwork on a couple of occasions after twice ghosting past Tavernier.

They should have had a penalty with quarter of an hour left but referee Kevin Clancy failed to spot David Bates’ blatant handball.

It was all hands to the pump for Murty’s side in the closing stages but they stood firm for another vital three points.

U.S. Soccer’s voting structure to be affected by new bill
Tottenham’s lack of ruthlessness hurt them vs. West Ham and will stop them competing for trophies
Messi row after Argentina World Cup clash sparked threats
Debt up 133, revenue down, losses of £23.2m amid COVID-19
Barcelona vs. Ferencvaros – Football Match Report – October 20, 2020