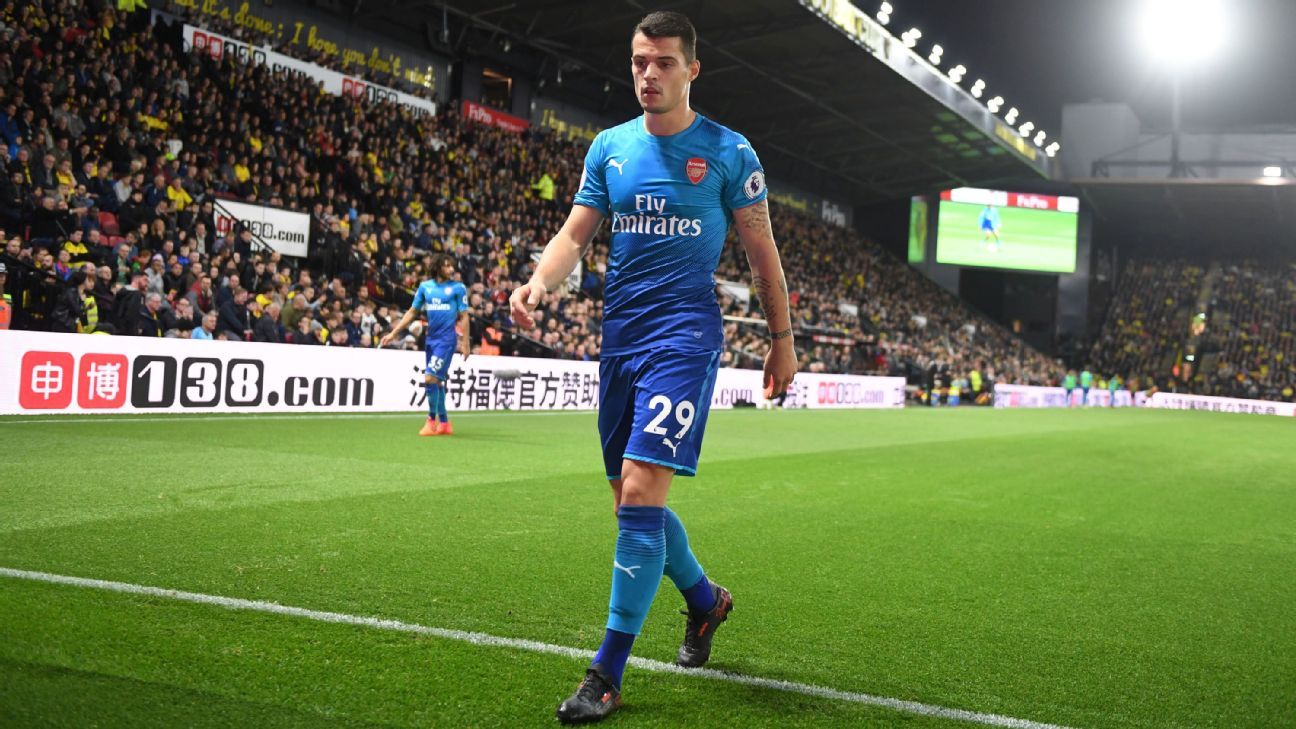 
Granit Xhaka already has one brother, Taulant, active in professional football, but such is the disconnect between the midfielder’s performances for club and country one wonders if there is a third Xhaka — a secret identical twin — who pulls on the national team shirt of Switzerland.

At Arsenal, Xhaka is burdened by being a symbol of mediocrity; a symptom of the institutional failings which have left the club creaking under Arsene Wenger. Critics were provided with more evidence to that effect on Sunday with his unconvincing performance in a 3-1 defeat to Manchester City that only accentuated the gulf between Arsenal and the very best.

And yet, as he prepares for his country’s upcoming World Cup playoff with Northern Ireland, Xhaka assumes a very different status. On Aug. 29 he was named Switzerland’s player of the year. Given the award was announced days after he had been overrun in a 4-0 defeat at Liverpool — one of the very worst defeats of Wenger’s reign — Arsenal’s tweet announcing the accolade attracted some choice replies.

This unfortunate piece of timing made it clear that an extreme form of cognitive dissonance has wrapped itself around Xhaka. People do not see the same player for club as they do country. But why? And how?

“Granit Xhaka has many qualities. He is a fantastic passer, has a great shot and is probably one of the most gifted players ever to play for Switzerland,” David Lemos, a journalist and presenter on RTS and Swiss football expert, tells ESPN FC. “Xhaka can find passing angles and move forward with the ball in a way that we have never seen in this team. He is the epicenter of the Swiss squad.”

Capped 55 times and still only 25 years old, Xhaka is the heartbeat of a Switzerland team that recorded nine successive victories in qualifying before falling at the last, with a defeat to Portugal on the final day leaving them with a two-legged tie against Northern Ireland to reach the finals in Russia.

According to Lemos, though, the context in which Xhaka operates for Arsenal and Switzerland, where he was moved from a No. 10 position to a deep-lying playmaker by current head coach Vladimir Petkovic, are subtly and crucially different. It is a question of shape as well as personnel.

“Xhaka is also aided by Valon Behrami, a fantastic fighter, a player who has a taste for difficult midfield battles and plays a huge role in recovering balls, tackling and adding a physical touch to the midfield,” said Lemos. “He is a playmaker and needs players next to him, ideally in a three-man midfield where he is back and center, of which at least one agrees to do the dirty work.”

During qualifying, Switzerland either played with a 4-3-3 or a 4-2-3-1, both of which effectively gave Xhaka more bodies to work with in central areas. By contrast, while Arsenal’s move to a 3-4-3 at the end of last season initially looked as though it would give the chance to express himself more freely with the safety of a back three behind him, it also has left him more exposed.

Moreover, without a fighter of Behrami’s type alongside — Aaron Ramsey has recently been his partner — opponents frequently ghost past a player who is neither an effective nor disciplined tackler. Granted, the intensity of international football is not comparable with that of the Premier League, but the question of Xhaka’s personal playing style is an important one.

It is worth recalling that when he joined Arsenal for £35m from Borussia Monchengladbach in the summer of 2016, Wenger had reportedly turned his attention away from N’Golo Kante. When his signing was confirmed, Arsenal were keen to portray Xhaka as an commanding figure and the man himself talked of being “an aggressive player and also a leader.”

Maybe he even believed it. Certainly those Arsenal fans hoping for Kante — possibly seduced by the nominative determinism of a hard man called Granit — were given a misleading impression. Xhaka is a clever and delicate passer of the ball but is no one’s idea of a midfield general.

The Kante comparison has been a hard one to shake. Instead of appreciating Xhaka for what he is, fans lament what he is not. It is a problem compounded by a tactical system which does not appear designed to showcase his best qualities. One cannot also avoid the fact Xhaka has performed to a disappointing standard, particularly this season.

“Xhaka is a great talent, one of the three to five best players we have had in Swiss football, but we don’t consider him to be an absolute genius who was going to single-handedly drive Arsenal to the title,” Lemos said. “With the right players next to him though, and with a tactical display that suits his qualities, he can be a great asset.”

Switzerland have managed that process far more effectively than Arsenal, who are still waiting for the real Granit Xhaka — the one of international football, the player of the year — to reveal himself.