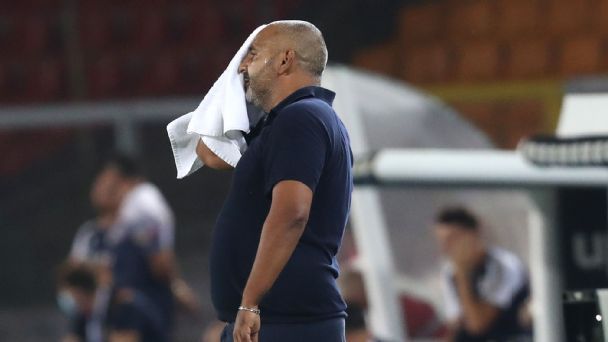 
Italy’s oldest professional club Genoa guaranteed Serie A survival on the final day of the season for the second year running on Sunday by beating Hellas Verona 3-0, while Lecce became the last team to be relegated.

Lecce, promoted last season, lost 4-3 at home to Parma and were relegated for the ninth time since their Serie A debut in 1985-86. Genoa finished 17th with 39 points, four ahead of Lecce who join SPAL and Brescia in Serie B next season.

Antonio Sanabria scored twice in the first half hour for Genoa and Cristian Romero, sent off in the second half, added the third before halftime. Genoa’s Francesco Cassata and Verona’s Sofyan Amrabat were sent off in the last minute.

Fabio Lucioni put through his own goal before Gianluca Caprari added a second for Parma but Antonin Barak and Biagio Meccariello pulled Lecce level at half-time. Andreas Cornelius and Roberto Inglese restored Parma’s two-goal lead and Gianluca Lapadula pulled one back.

Lecce needed to win and hope that Verona could take at least a point at Genoa but their hopes were effectively over after half an hour.

Although the game was effectively settled, tempers flared in the second half. Romero was sent off for a second bookable offence just after the hour while Genoa’s Francesco Cassata and Verona’s Sofyan Amrabat followed for scuffling by the corner flag in the last minute.

Meanwhile, Lecce’s defensive failings were again evident as they fell 2-0 behind against Parma.

Lecce gallantly fought back and levelled with headed goals by Antonin Barak and Biagio Meccariello in five minutes before halftime.

However, second-half goals from Cornelius and Inglese restored Parma’s two-goal lead before Gianluca Lapadula pulled another back for Lecce.

In other matches, Fiorentina completed their campaign with a 3-1 win at SPAL while Udinese won 1-0 at Sassuolo and Torino held Bologna 1-1.

Inter Miami signs striker Gonzalo Higuain from Juventus
Son Heung-Min joins Salah Aguero and host of greats in Premier League’s 4-goal club
Alex Oxlade-Chamberlain the latest to be linked with Liverpool-Wolves switch
Serie A 2020-21 season preview — Can Milan clubs keep Ronaldo, Juventus from another title?
Bayern Munich look dominant in Bundesliga, but is their squad too thin to defend Treble?