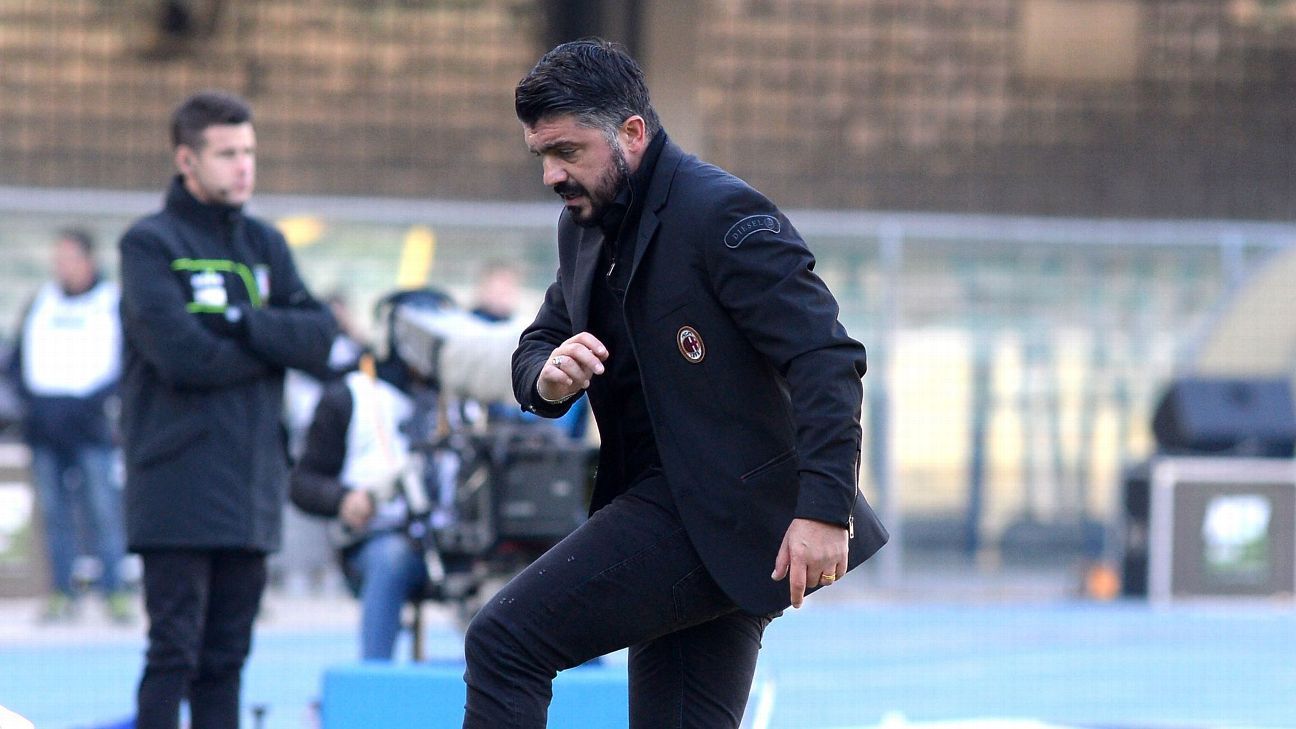 
AC Milan coach Gennaro Gattuso has accused his team of falling apart at the “first sign of adversity” after they were beaten 3-0 by Hellas Verona on Sunday.

The Rossoneri succumbed to their seventh defeat of the current Serie A season as the gap to the top four grew to 14 points, and Gattuso took exception to his team’s lack of fight after Antonio Caracciolo’s 24th-minute opener.

“We have to improve because we did not react after falling behind,” Gattuso told Milan TV after defeat to a team they had beaten 3-0 in the Coppa Italia just four days earlier.

“We created many opportunities before conceding the first goal, but we dropped the intensity after the first sign of adversity. We continued to play but the second goal knocked us down. If you check the stats, we recorded 30 attempts, but it’s not enough, we have to play as a team.

“We cannot look for consolations. We have to remain focused until the end. The team cannot drop the intensity like this when facing adversity; we have to improve in our concentration and when pressing our opponents.

“Hellas Verona took the lead because we made a mistake in marking. We knew they would play defensively and try the counterattacks. We were not good enough in the transition phase too. We all take the responsibility, I am the first one to do it.”

Gattuso has overseen three league games since replacing Vincenzo Montella in charge of the Rossoneri, and his record is one win, one draw and one defeat, with the draw providing the one and only point Benevento have picked up in Serie A all season.

He admits the situation is worse than it first appeared as he battles to boost his players’ confidence levels.

“It’s time to work on the psychological aspect because losing 3-0 hurts,” he said. “Hellas Verona played a good match, but the full-time score doesn’t do us justice.”

Milan host Atalanta on Saturday with both sides on 24 points, three adrift of sixth-placed Sampdoria and Europa League football next season. They then host city rivals Inter in the quarterfinals of the Coppa Italia before ending 2017 with a trip to Fiorentina.

In February, they face Ludogorets in the round of 32 of the Europa League with that competition providing another route into Europe next season, and their sporting director Massimiliano Mirabelli does not want to write the season off just yet.

“We have to improve on many aspects and coach Gattuso is already working on them,” he told Milan TV. “We knew we were going to face a difficult journey with drawbacks and obstacles, maybe we expected less of these but let’s hope we can still turn things round and reach a decent position at the end of the season, going forward also in our other competitions.”

Mirabelli has ruled out making emergency signings this winter, after spending over €200 million on new players in the summer.

Besides, with the threat of financial fair play sanctions looming, they would struggle to buy anybody without first selling, and that could just cause further confusion.

“We want to create a strong base from which we can start again,” he said. “Our current squad is very valuable. We have already made so many changes, we don’t want to make others as big to avoid creating complications.

“We believe in this team. I see some improvements — Gattuso is working hard trying to strengthen the team’s spirit. The fans deserve answers and we want to reassure them. We are working on building AC Milan’s future.”