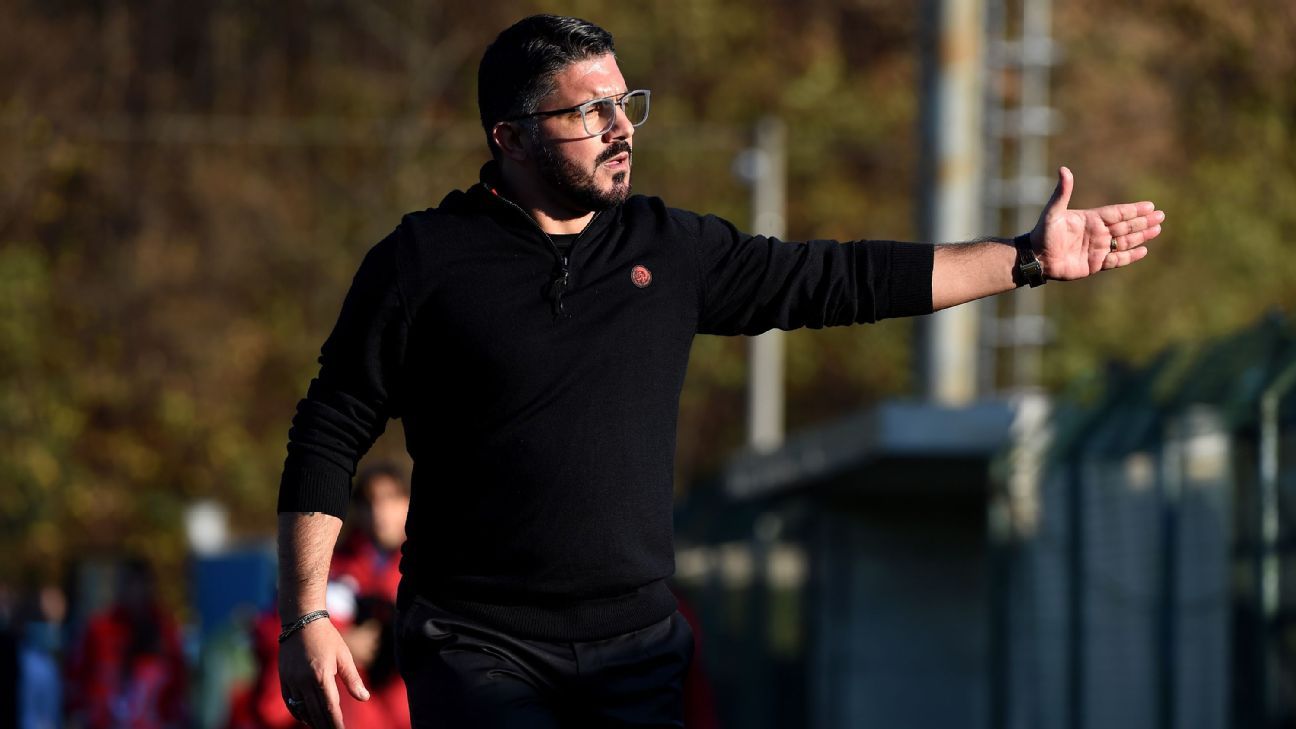 
Gennaro Gattuso says he is aware of the level of responsibility after being appointed as AC Milan’s new coach and intends to do the role justice.

Former Rangers and Milan midfielder Gattuso has replaced Vincenzo Montella, who was dismissed on Monday with the Rossoneri seventh in Serie A with just six wins and as many defeats from their first 14 games of the season.

Gattuso was officially presented at a news conference on Tuesday afternoon after having led his first training session following his promotion from youth-team boss.

“It’s definitely an important day for me,” Gattuso said. “It’s a great responsibility. There’s a lot of work to be done, but it is a pleasure to work with these lads.

“There’s everything one could need to work well here. My staff and I know that we have a huge responsibility, but I know that this team can do well, we just need to become a team and play as a team. We need a battling spirit, but there is enough quality.”

The 39-year-old former Sion, Palermo and Pisa boss inherits a side 11 points off the pace in the hunt for a place in the Champions League next season. His first challenge is beating Benevento — a team who have won all their 14 games so far this season — and he does not want to think beyond that just yet.

“It’s like a World Cup final,” he said. “Now’s not the time to look at the league table or the Champions League, we just need to think about Benevento. I’ve spoken to my president [former Milan president Silvio Berlusconi], one of the greatest winners ever, and we spoke about the DNA of AC Milan. He’s a footballing connoisseur and I listened carefully to him.”

General manager Marco Fassone said Gattuso’s 13 years as a Milan player was just one of the reasons he has been chosen to coach the club through a difficult spell, even if he may not have the same level of experience as other coaches.

“Rino [Gattuso] knows this club, this dressing room better than anybody else,” Fassone said. “It’s a decision that we wanted to make, it’s not an emergency choice. I was very happy in the talks I had with Rino: he’s enthusiastic and has the passion which characterises him.

“I can only wish him the best of luck for this adventure and hope he can take this opportunity, then at the end of the season we will analyse how things have gone and if we are all happy, he will stay on.”

Sporting director Massimiliano Mirabelli added: “Some of you think he may lack experience, but I think he’s a coach who could have a great career.”

Meanwhile, Montella has said Milan were too hasty to fire him, although he wished his successor the best of luck.

“I have a great relationship with Rino and I wish him all the best. He’s a friend and can be relied upon. It’s hard for me to explain what I feel at this moment in time. I’m very disappointed because I knew that the team were with me, and I told them to be with the new coach too.

“These players deserve much more and I’m sure they will get out of this difficult moment.”

Montella felt the tide was already turning with a 5-1 win in the Europa League last Thursday and goalless draw against Torino at the weekend.

“I was relaxed and didn’t suspect anything, I promise,” Montella added. “I was ready for training, as always, and it was a day like any other. [I was surprised by] the timing because there had been moments when it would have been more plausible. Right now, though, the team were giving answers both technically and in terms of their temperament.”

Milan have already played — and lost to — the six teams above them in the current standings and with an easier period of fixtures ahead, at least on paper, Montella was upset not to have been given more time to put things right.

“Exactly — I think I am not being big-headed when I say that even I would have made it,” he said. “There’s a run of fixtures which, on paper, are easier and we could have put together a string of good results, and I honestly feel I deserved these games, given how we were playing.

“But I am serene in accepting this decision and I’d like to thank everybody for giving me this opportunity and for the pride that I will always had to have coached the team I supported as a child.”

Montella was not given this chance, however, and sporting director Massimiliano Mirabelli said that he had not delivered on the expectations.

“I’m sorry,” he said in La Gazzetta. “We knew we might face a few problems to begin with, but we had more than we expected which led to us taking this decision.

“I’d like to thank Vincenzo and his staff. We just needed a spark to turn things around. We expected more points than what we’ve got, even if we knew we had a young squad who need time. It’s been said that we had had a fight, but it’s not true — I maintain an excellent relationship with him.

“It was a difficult night. We were in touch with China due to the difference in time zone and, this morning, it was very difficult for me to tell him the decision.”