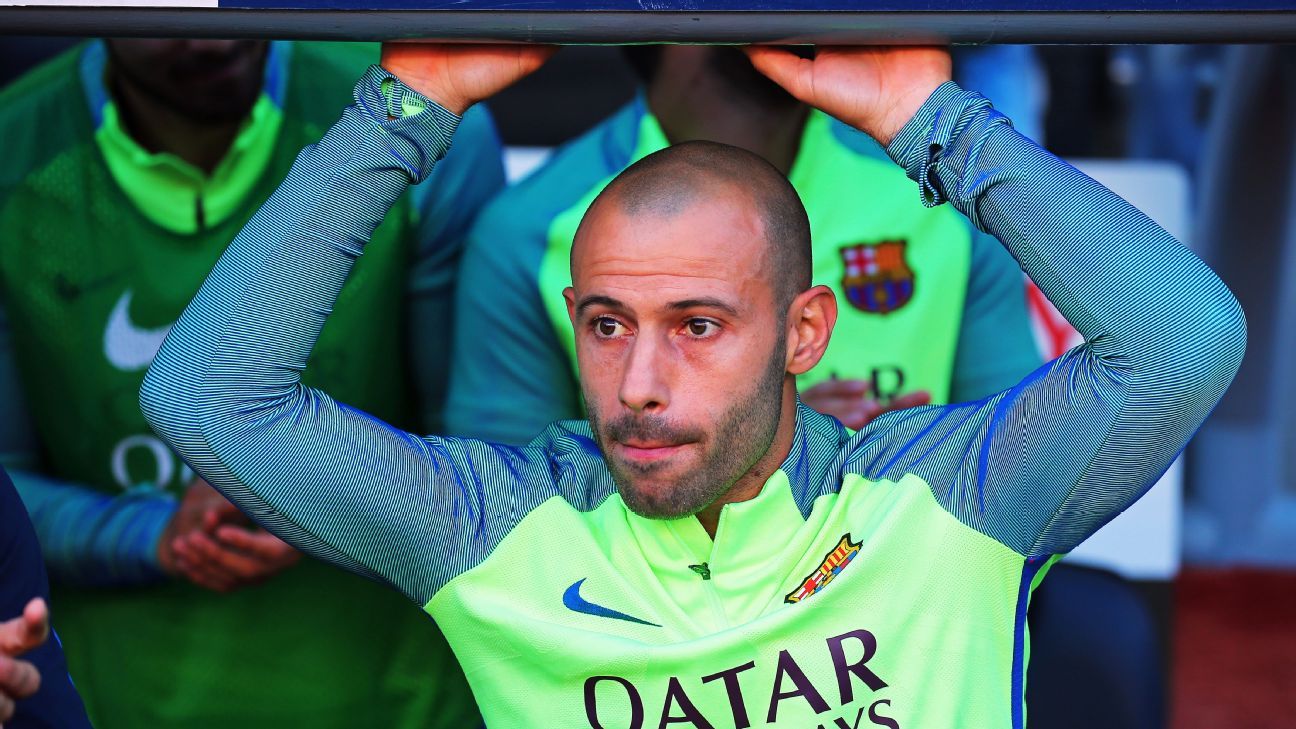 
BARCELONA — Ernesto Valverde admits Barcelona have a challenge on their hands convincing Javier Mascherano to stay at the club beyond January but said the issue will be handled internally.

Various reports in the Catalan media this week have claimed that Mascherano wants to leave the Camp Nou for the Chinese Super League next month.

Mascherano himself added to those rumours when he told TyC Sports on Thursday that he needs to play somewhere he feels important. Lionel Messi, meanwhile, said he understands his teammate’s feelings given he has lost his place in the team to Samuel Umtiti.

However, an injury to Umtiti has left Barca short at the back for the next two months and created an opening for Mascherano, who should return from a hamstring problem next week.

“The transfer window’s not even open yet,” Valverde told a news conference on Saturday when faced with a barrage of questions about the 33-year-old’s future.

“It’s true that is one of the issues we have to look at. But for the time being, Mascherano is one of our players and when he’s played, he’s played well. He is committed to the club on and off the field and for the moment we don’t have to think about anything else.”

Valverde also spoke about Mascherano’s importance behind the scenes and in the dressing room, but avoided divulging too much about the chances of him leaving in January.

“They’re internal questions,” he added. “We don’t talk about new players coming in and at the same time we don’t talk about these things, either. We will see what happens. What Barca want to do is to strengthen and not weaken ourselves.

“I have my opinion, you have yours and [Mascherano] has his. We will deal with it internally and see what happens.”

In the meantime, Thomas Vermaelen and Gerard Pique are expected to continue in the middle of defence when Barca travel to Villarreal on Sunday looking to get back to winning ways after back-to-back draws in La Liga.

“There were a lot of questions about Vermaelen but he has responded well,” Valverde said. “He had to play in a demanding situation [at Valencia] and I think he has done well in games he’s played. We are very happy with him and we trust him completely.”

Messi will also return to the Barca team after starting on the bench for the second successive Champions League game against Sporting Lisbon in midweek.

“We have spoken about these things and the players are aware of the difficulties a long season and the accumulation of games poses,” Valverde said of his reasoning behind leaving Messi out.

“It’s not just this season, but every other season, too. There’s no problem with Messi or any other player. Will I do it again? We will see, depending on how things go.”

Cristiano Ronaldo joined Messi on five Ballon d’Ors this week and then claimed in an interview with France Football that he is the best player to have ever played the game.

“Each person has their own opinion,” Valverde said, trying to avoid controversy when asked for his take on Ronaldo’s comments. “For me, the best players are the ones I have here, starting with Messi and followed by the rest.”