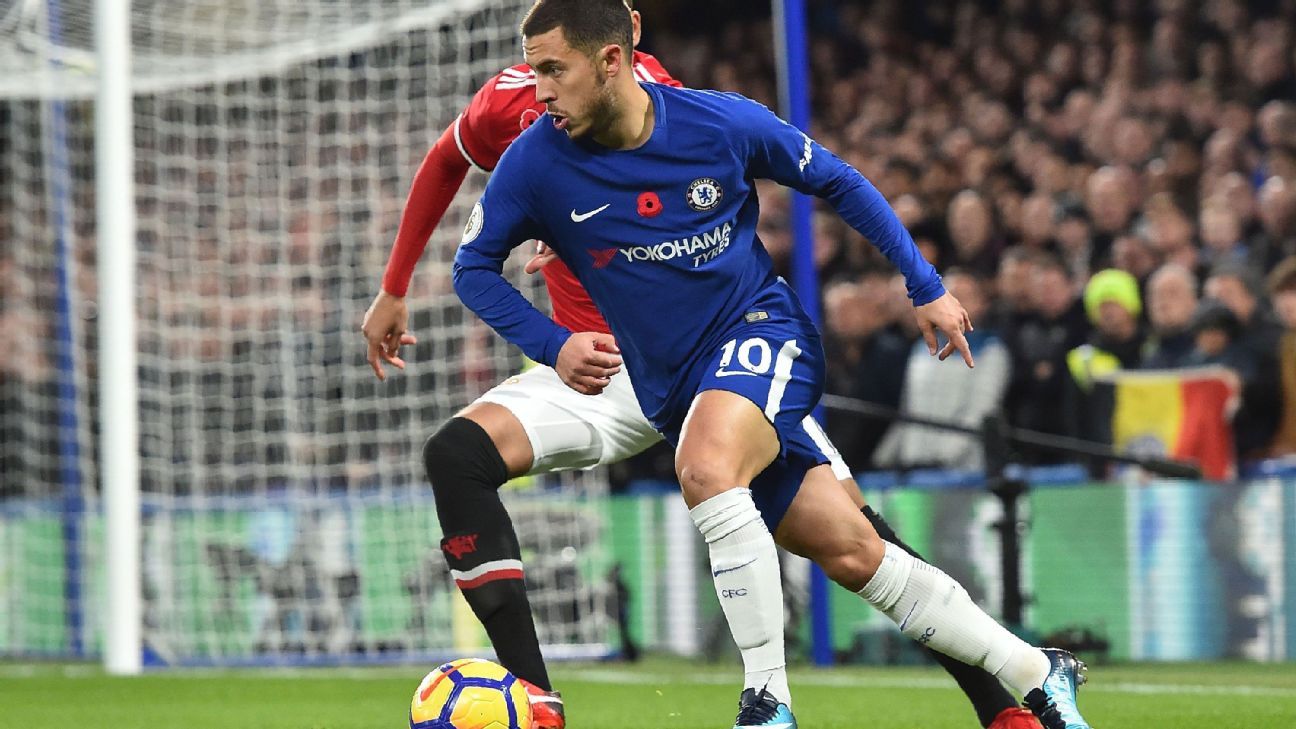 In recent seasons, the La Liga giants have made no secret of their desire to sign Hazard, and more often than not the player has talked up the possibility of heading to the Bernabeu with a few choice remarks while away on duty with Belgium.

The 26-year-old was at it again at the weekend, proclaiming it would be a dream to play under Real manager Zinedine Zidane and describing him as his idol. Hazard also said it would be a pleasure to work with former Chelsea manager Jose Mourinho again, although he diplomatically went on to say he was enjoying life with the Blues and remained focussed on playing for them.

For all the talk, Hazard, now in his sixth season as a Chelsea player, has remained at the Bridge and is a firm favourite with supporters who would be displeased if the club chose to sell the star who is at the peak of his defence-shredding powers and arguably the Premier League’s most valuable transfer asset.

Should Hazard take up the offer, it would make him the highest paid player in the English game and possibly see him stay at Stamford Bridge for the remainder of his peak years.

Owner Roman Abramovich is clearly happy to make the investment to tie Hazard to the Blues, which indicates his sale would only be sanctioned to pave the way for a spectacular acquisition. Back in 2015 an over-hyped swap deal with Real involving Galactico Gareth Bale failed to materialise; the following year, James Rodriguez and Alvaro Morata were in the frame for a trade, and to keep things nice and spicy, Cristiano Ronaldo’s name has also found its way into the equation from time to time.

A couple of years ago a deal involving Bale had a certain attraction to it, but now the former Tottenham player — who has been at the Bernabeu since September 2013 — appears to be constantly troubled by injuries. Rumours suggest Zidane might be looking to move the 28-year-old and predictably Chelsea are among a number of clubs being touted as a possible destination. Given the Wales international’s problems with fitness, Bale appears to be a risky proposition and certainly wouldn’t be worth exchanging for Hazard, even if there was a significant cash adjustment in Chelsea’s favour.

Neither James nor Morata made the grade to become Galacticos at Real. James found himself farmed out to Bayern Munich on a two-year loan deal that scuppered talk of a move to the Bridge while Morata of course signed for Chelsea in the summer in a standalone club-record deal worth an initial £58 million. The Spain international has found his feet and has already forged a productive relationship with Hazard that can only get better.

Chelsea manager Antonio Conte was pivotal in Morata’s move to SW6, the Italian having signed him on loan from Real when boss at Juventus. Conte took over as the coach of the Italy national team before he had a chance to work with the striker, but his longstanding faith in the 24-year-old is paying dividends. Similarly, Hazard has flourished under Conte, who has been careful to manage the Belgian’s game time during a recent recovery spell from injury. It’s a caring approach that Hazard is certain to appreciate, and as long as Conte remains Chelsea manager, it could be a key factor in him remaining a Blues player.

Headstrong and charismatic, the Italian appears to regularly be at loggerheads with the Chelsea board, though, presumably irking Abramovich in the process. Rumours of Conte departing abruptly surface as regularly now as the Hazard-to-Madrid stories, and the supporters who hero worship the boss know only too well there is an inevitability about what will happen to him.

It’s not a question of if. It’s when. Time will tell if this next managerial hiatus will prove too much disruption for Hazard.

Barcelona vs. Ferencvaros – Football Match Report – October 20, 2020
Barcelona boss Koeman accuses Getafes Nyom of very ugly insults during La Liga defeat
Rashford, Fernandes both 9/10 as Man United pour on the style late
Unfancied and unfashionable Augsburg continue to prosper in the Bundesliga against all odds
Juventus to jump ahead of Arsenal for Lyon’s Aouar