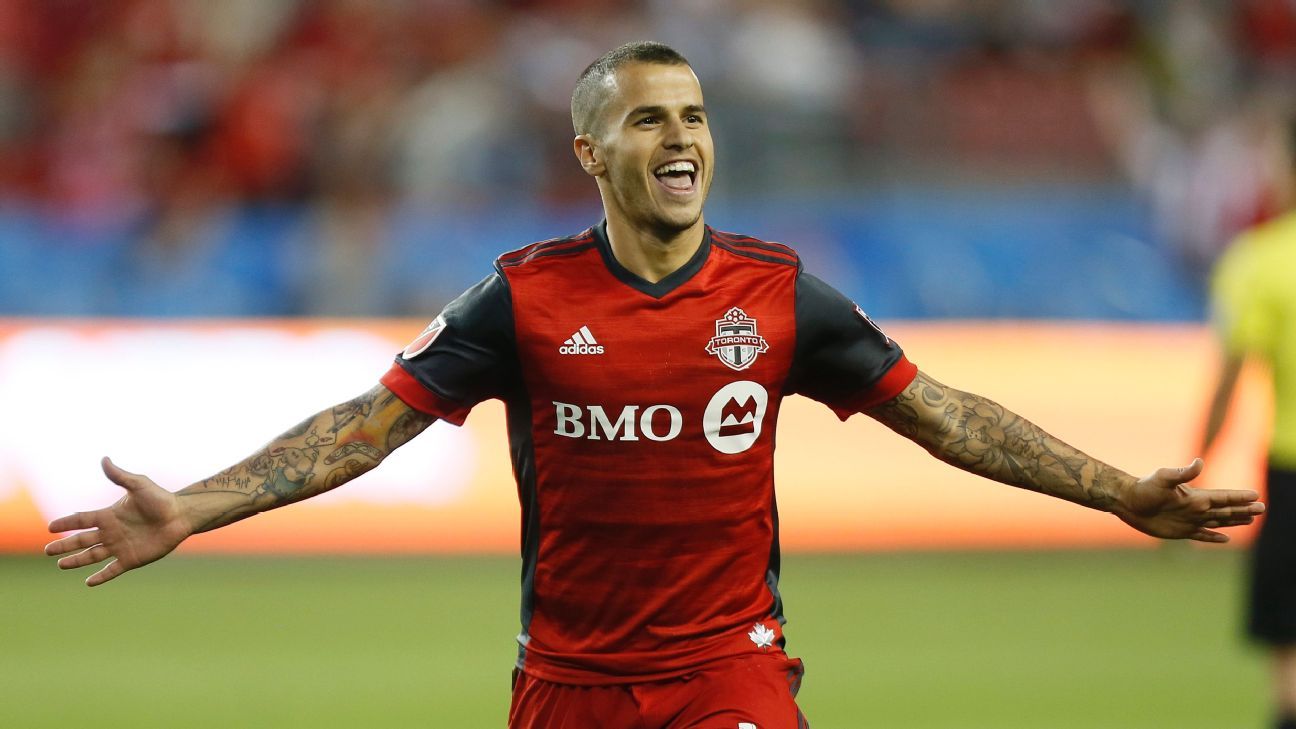 
Sebastian Giovinco is a problem that MLS defenses have been trying to solve for three seasons now with little success. The Toronto FC forward has an MVP award to his name, probably should have had a second last year and has totaled 60 goals and 41 assists in 95 league and playoff appearances.

The Columbus Crew had the benefit of not facing Giovinco — as well as strike partner Jozy Altidore — in the first leg of the Eastern Conference final, which ended in a 0-0 tie. But now TFC manager Greg Vanney is set to “release the hounds,” and when the second leg kicks off on Wednesday, Giovinco figures to be at the center of Toronto’s attack.

At the core of Giovinco’s effectiveness is that he does so many different things at peak level. His dribbling ability is exceptional and is augmented by his off-the-charts quickness. He can punish teams with his knack for scoring on set pieces, and he can strike from distance. Giovinco also can pick teams apart with his passing, as evidenced by his assist totals.

“Giovinco can hurt you in almost every way possible,” said Wil Trapp, who as one of the Crew’s holding midfielders figures to see plenty of Giovinco on Wednesday.

“Any time you talk about players that can create goal-scoring opportunities on their own, they’re dangerous,” Berhalter said. “Giovinco has that ability. Even when you have him closed down, he creates something. He’s certainly a player that you have to be aware of at all times.”

Giovinco’s soccer IQ grades out at the high end of the scale, as well. He even influences the game when the opponents have the ball. Atlanta United defender Michael Parkhurst recalled how in one game against Toronto, he was allowed to dribble up the field, and Giovinco simply slid into the space that Parkhurst just vacated.

“If I lost the ball, Giovinco was going to be wide open right behind me,” he told ESPN FC via telephone. “He’s just clever, and he’s ready to play off the counterattack. He likes to drop in the middle. And you can’t give him space to turn when he’s in the middle of the field, because he’s such a good passer, as well. It’s a lot of different things to deal with over 90 minutes that are difficult, and that’s why he’s one of the best.”

So how do you stop Giovinco? In terms of tendencies, Parkhurst noted that the Italian tends to shade toward the inside left channel, the better to cut inside and curl the ball to the far post. That said, if a defender overcommits in an attempt to block his shot, he’ll simply cut the ball to his left foot and push closer to goal.

“It’s similar to Ignacio Piatti or Justin Meram; those guys are just so good at that, and it really leaves defenders in a tough spot trying to cover two things at once,” Parkhurst said.

The main tactic against Giovinco is to make the game as physical as possible. That was the approach the New York Red Bulls took in the Eastern Conference semifinals, fouling him 11 times over the two legs, and those were just the ones that were called. The rough stuff finally got the better of Giovinco, who picked up a yellow card for dissent in the second leg against the Red Bulls that resulted in his aforementioned suspension for the first leg against Columbus. That will certainly be one method the Crew will employ on Wednesday.

“I think we’ve had success against Giovinco when we’ve limited his space, and you make it a physical game, and that’s important against him,” Trapp said.

“There are games when the physicality can get to Giovinco a little bit,” Parkhurst said, “and it can either pump him up and get [him] more fired up, I’ve seen. Or it can take him out of the game a little bit, where obviously he doesn’t like to get into physical confrontations and deal with big, physical center backs. I have seen that approach work.”

But above all else, teams should try to avoid situations where Giovinco is isolated one-on-one against a defender and make sure that help is nearby. The problem is these situations can manifest themselves in a variety of ways. Giovinco is terrifying when he’s operating on the counterattack, but he’s also adept at dropping back into midfield, leaving center backs with the age old conundrum, “Should I stay or should I go?” The answer is that it needs to be a group effort.

“Swarm defending is one of the best ways to deal with Giovinco,” said Trapp. “It’s not easy, but it’s a way to deal with him. He attracts attention. Always.”

That approach has its limitations, however, for the simple reason that Giovinco isn’t the only attacking weapon Toronto has. Altidore’s power and strength make him a handful for defenders, as well. Then you have the likes of Justin Morrow bombing forward at the right moments. Michael Bradley is the one to often kick-start the attack, and Victor Vazquez has been a huge addition to Toronto this year, providing an alternate but a very skillful conduit to Giovinco and Altidore.

“Bradley is obviously very good at finding those guys, but from a deeper position,” Parkhurst said. “I think they were missing that link right underneath the forwards. Vazquez fits the team very well.”

One approach that Berhalter won’t take is veering away from his trusted 4-2-3-1. Earlier this season, he opted for a 4-1-4-1 against TFC, and the result was a 5-0 shellacking at BMO Field.

That said, Parkhurst — who spent three seasons playing in Columbus under Berhalter — believes the Crew will do all they can to interrupt the service to Giovinco and Altidore, and that starts with Bradley.

“Anytime we played Toronto, we talked about getting pressure on Michael [Bradley],” Parkhurst said. “We know that he loves to play with Giovinco and Jozy. But I think Berhalter’s approach will be to make Toronto defend as much as possible and keep the ball.

“Jozy and Giovinco aren’t guys that love to defend and get out there and chase center backs or outside backs. I think Gregg will try to make them do that or take advantage of the fact that they’re not going to do it. That has its benefits offensively for sure, but you have to make sure that if the ball turns over, you know where those guys are because they’ll be playing off the counterattack when they can.”

Of course, part of Giovinco’s genius is his ability to pop up for a special play on a night when he has otherwise been quiet. Parkhurst was quick to recall precisely that scenario when Giovinco buried a free kick in the latter stages of a 2-2 draw late in the season. The Italian did the same against the Red Bulls in the first leg of the Eastern Conference semis.

“Giovinco has just got those moments,” Parkhurst said.

Wednesday’s second leg will reveal if Giovinco can deliver a few more.