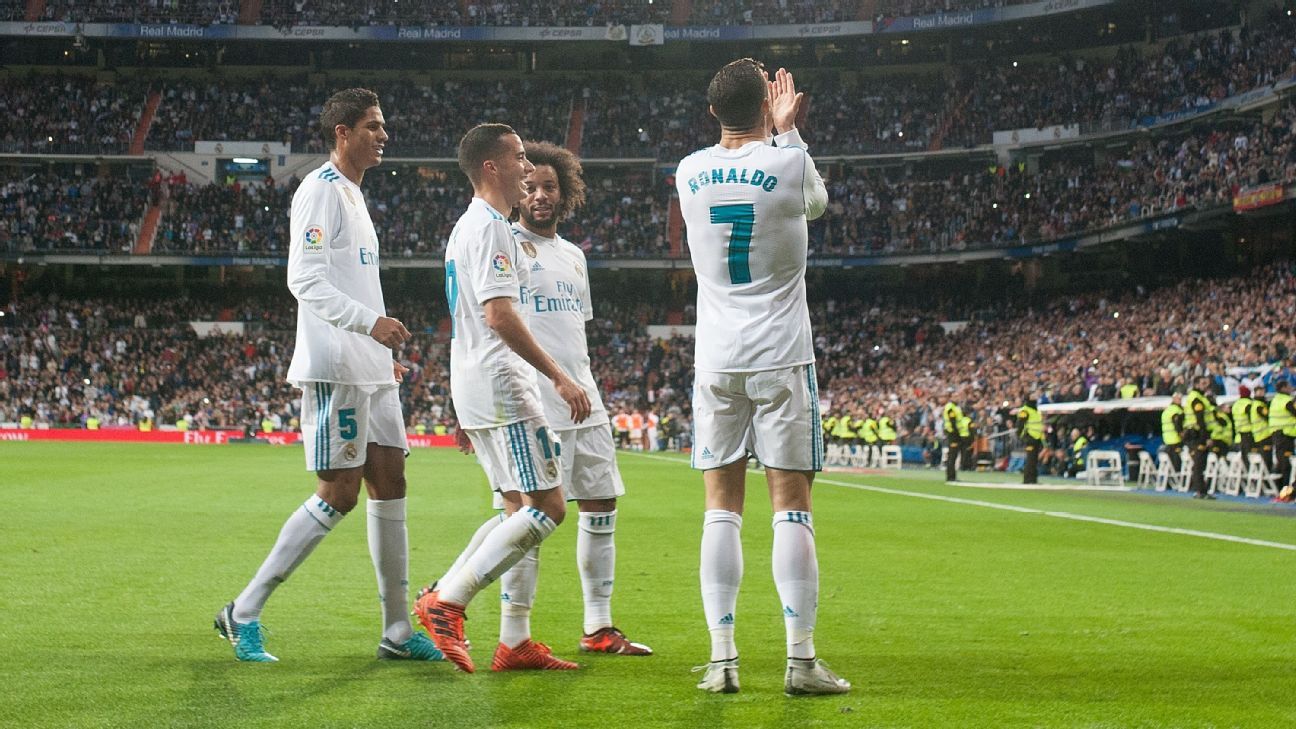 
Real Madrid extended their Liga winning run at home to four games in a hard-fought contest against a Malaga side who came to the Bernabeu with victory, not avoidance of defeat, on their minds. Cristiano Ronaldo settled the game by burying the rebound from his saved penalty after Malaga had twice come from behind to level through Diego Rolan and Chory Castro. Karim Benzema opened the scoring and Casemiro added Madrid’s second.

Real Madrid dug deep for victory in a chaotic game that threatened to derail their Liga title defence further still and created plenty of chances. Ronaldo and Benzema both found the net for a second consecutive match and ended their respective La Liga droughts, neither having scored since the win at Getafe in mid-October. Had it not been for a heroic performance from Malaga keeper Roberto the margin of victory would have been wider.

This was hardly a performance to silence the critics and Real’s patched up defence struggled against Malaga’s swift breaks. Kiko Casilla, who had kept three consecutive clean sheets, had a hand in the second goal by not getting his hand to Castro’s strike and it is worth noting that the visitors had not scored a single goal in six La Liga away fixtures this season prior to Saturday. They were afforded far too much time and space to get off the mark in the Bernabeu.

7 —  It has to be assumed that Zinedine Zidane instructed Lucas Vazquez to hug the touchline to pull makeshift left-back Paul Baysse, a central defender by trade, out of his comfort zone. It was from there that Vazquez fed Luka Modric to produce the decisive penalty. Toni Kroos was second to go as Zidane brought on Theo Hernandez to cover the left, where Roberto Rosales was running amok. Bringing Modric on for Isco after Malaga’s second was unpopular but lent Madrid more control in midfield.

GK Kiko Casilla, 5 — Casilla didn’t have a save to make until the 53rd minute but when he did… the second goal slipped under his gloves and he might have reacted quicker to the first, but he was unsighted.

DF Dani Carvajal, 6 — An excellent first half during which he was everywhere on the right and provided some incisive balls, Carvajal dropped off in the second but was still one of Real’s better performers.

DF Jesus Vallejo, 5 — The youngster was hesitant on both Malaga goals, giving Castro all the time in the world to pick his spot and failing to close down Rolan. Made amends with a wonderfully timed tackle on Borja Baston in the second half but Zidane will be happy to have Nacho and Sergio Ramos back.

DF Raphael Varane, 5 — A weak clearance straight to Keko led to Chory’s goal and Varane was lucky to escape censure for flooring Juanpi on the edge of the area. An uncharacteristically clumsy performance from the senior central defender.

DF Marcelo, 5 — Dangerous in the opposition half, the Brazilian’s cross onto Ronaldo’s head led to the opener. Struggled to contain Rolan when he targeted his flank and needed the extra cover of Hernandez late on as his positional awareness was cast in an unflattering light.

MF Casemiro, 7 — Only Kroos made more tackles than the Brazilian, who relished in his role of midfield destroyer. Added the second goal from a corner he had forced to take his tally for the season to three.

MF Toni Kroos, 6 — Assisted Casemiro from the corner flag and his delivery was sumptuous all afternoon. However, there is a reason the Brazilian has become key to Zidane’s blueprint. Kroos remains suspect defensively and it was his awful attempt at a back pass on the edge of the area, and failure to close down Keko, that let Malaga back into the game.

MF Isco, 6 — Not a vintage performance from the midfielder against his old side but no starter was more accurate with his passes (95.7 percent). Made way for Modric on the hour mark.

FW Lucas Vazquez, 7 — Had two decent penalty shouts waved away and was a constant thorn in Malaga’s right side. His final delivery sometimes let him down but no Real player ran more for the cause.

FW Karim Benzema, 8 — Comfortably the best player in a white shirt, his attacks down Malaga’s left flank caused no end of panic in the visiting defence. He won’t score many easier goals but his all-round play was excellent and his movement impossible to track.

FW Cristiano Ronaldo, 6 — Finally added his second Liga goal of the season to seal victory, even if his penalty was well-saved. A towering header at the far post came off the bar to afford Benzema a knock-in and Ronaldo drew a spectacular save from Roberto with another at the end of the first half. Still far from his best, but four shots on target from seven is an improvement.

MF Luka Modric, 7 — On for Isco, moved the ball around well and earned the penalty that led to Ronaldo’s winner.

DF Theo Hernandez, NR –– On for Kroos to lend Marcelo a hand.

FW Borja Mayoral, NR — On for Benzema, only had time for two touches.