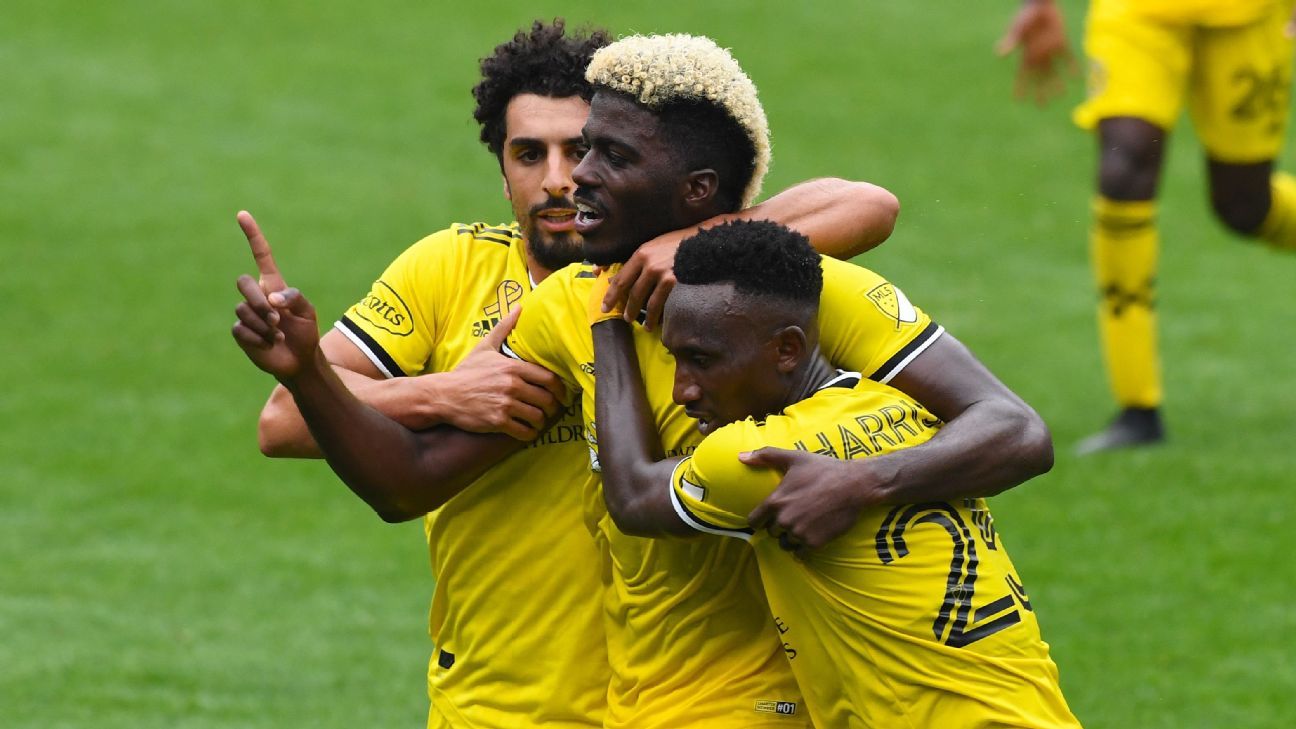 We’ve enjoyed another week of frantic MLS action in a wildly condensed schedule, and another week in which Caleb Porter’s Columbus Crew demonstrated that they are the class of the league. Further down our Power Rankings, however, once-mighty Atlanta United now finds itself looking up at the vast majority of its peers.

The league-leading Crew may be disappointed with a draw in Chicago, but they’re still three points clear in the Supporters’ Shield race and Gyasi Zardes’ eighth goal of the season consolidates his place as the league’s second-leading scorer.

It’s getting harder and harder to keep up with all the Union’s academy products, with 20-year-old midfielder Anthony Fontana netting twice in 25 minutes of action to top the Revs 2-1.

The Sounders usually struggle against Matias Almeyda-led San Jose teams. The sides drew 0-0 at MLS is Back, after all. Not this time. In fact, it was a night for padding the stats as Seattle tore the Quakes apart, 7-1.

Mauricio Pereyra’s 65th-minute winner was his third goal or assist in his past four appearances as Orlando’s unbeaten run stretched to six games.

Jozy Altidore scored his first goal of 2020 as Toronto ended its Canadian slate of fixtures with its fourth win from six.

A road draw at San Jose isn’t the worst result for the Galaxy, who are still unbeaten in five. Guillermo Barros Schelotto got Jonathan dos Santos and Javier Hernandez back too.

NYCFC are unbeaten in five straight following Saturday’s win over Cincinnati, a streak in which the Bronx side have conceded just twice.

Montreal rebounded from a heartbreaking loss to rival Toronto in the 89th minute by putting four past hapless Vancouver.

Not the greatest week for the Dynamo, who let two points slip in a road draw with Colorado and then fell to FCD in Dallas. Now it looks like Alberth Elis could be headed to Europe. Houston acquired Darwin Quintero for a reason, and he’ll need to be the man to step up.

The 1-0 win over Minnesota was the least that SKC deserved, as they dominated proceedings despite the absence of Alan Pulido. Johnny Russell, who continues to carve out a solid spell in MLS, bagged the winner.

After losing to RSL in midweek, the Black and Gold righted the ship with a 4-2 win over Portland, and the sight of Eduard Atuesta back on the field for a 10-minute run-out was encouraging. Perhaps the midfielder’s return is the cure for a defense that is still leaking far too many goals.

Only four Revs have scored in 2020 — designated player Gustavo Bou and Adam Buksa have combined for five goals in 22 appearances between them. Bruce Arena needs greater contributions from his headliners if New England is to have any hope of a playoff push.

The Timbers have conceded 15 goals since returning from MLS is Back, including four in the defeat to LAFC. The return of Larrys Mabiala from injury and Diego Chara from suspension will no doubt help, but overall Portland is in a rut.

Injuries meant Adrian Heath didn’t have a ton of options up top in the 1-0 defeat to SKC, but playing Emanuel Reynoso as a false nine — as he did in the last 20 minutes or so — doesn’t seem like the best use of the Argentine’s talents.

Did the boos for taking a knee prior to RSL’s game against Colorado affect the team mentality? Tough to say, but they didn’t help, and RSL got waxed 5-0 to lose the Rocky Mountain Cup.

Major League Soccer is on ESPN+. Seattle is the champion of the 26-team league, which added Nashville and Miami to the fold in 2020.
ESPN+: Live games and replays (U.S. only)
MLS home | Schedule | Standings

The Red Bulls’ 2-0 win over D.C. was the first match they’ve scored more than one goal since a March 1 win over Cincinnati.

The first time Nashville scored more than a single goal in its maiden MLS season came in a dominant 4-2 win over Atlanta. Progress.

Even in a season of struggle, FCD is doubling down on its commitment to youth following the sales of Reggie Cannon and Zdenek Ondrasek, although the latter sale was due to family reasons. A Texas Derby triumph over Houston provided a boost.

The Rapids needed a week like this. Badly. They salvaged a point in midweek against Houston and then took apart rivals RSL on the road to claim the Rocky Mountain Cup for the first time since 2015.

Colorado registers its first win since March 7 with a 5-0 thumping of Real Salt Lake. Watch MLS on ESPN+.

United have scored three goals in their past six matches, a stretch that’s seen them pick up just five points of a possible 18.

After a humiliating 7-1 midweek defeat to Seattle, the Quakes regained a smidgen of pride in tying the Galaxy 0-0. But the grim reality is that they are drawing at home and losing on the road. Getting maximum points at home in the next two games against a wounded Portland side is a must.

Miami’s second win over the season, this one over Atlanta, brought the expansion side closer to the East’s chasing pack but Saturday’s loss to Orlando kept David Beckham’s expansion side on the foot of the league table.

DP striker Robert Beric scored for the first time since MLS is Back, just his third goal of the year. For a team averaging a goal a game in 2020, the Fire will need more from their No. 9.

Thierry Henry’s men come alive in the second half to beat Vancouver 4-2. Watch MLS on ESPN+.

Vancouver was coming off a win against Toronto and had a full week to prepare for Sunday’s encounter against Montreal. None of it mattered as the ‘Caps imploded against the Impact, 4-2, and record signing Lucas Cavallini made matters even worse by getting sent off.

Losses to expansion pair Miami and Nashville in the past week leave Atlanta with a single win since March.

Cincinnati has scored just five goals in 10 games under Jaap Stam. Maybe more problematic is that it has conceded 13 times — including five in the past two games, losses to Columbus and NYCFC.

Social media roasts Kepa for Chelsea’s loss to Liverpool
Atletico Madrid sign Luis Suarez from Barcelona
Serie A 2020-21 season preview — Can Milan clubs keep Ronaldo, Juventus from another title?
Can Kepa, the world’s most expensive goalkeeper, save his Chelsea career before it’s too late?
Thiago shows why Liverpool signed him with superb performance in victory at Chelsea